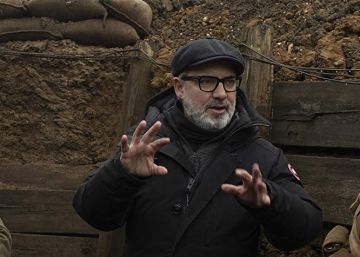 Rosencrantz and Guildenstern stroll across the battlefield of a Europe ravaged by a bleak war. Those secondary characters of Hamlet, who appeared in a single sentence, and to whom Tom Stoppard dedicated a play and a movie, witnesses from the distance of pain and conflicts of the Prince of Denmark, would now be in 1917 two private soldiers involved in an almost suicidal mission: crossing the enemy lines of a continent turned into a gigantic trench so that an English battalion does not fall into a German trap. As Sam Mendes (Reading, 54 years old) says, “everything is in Shakespeare. “

The new movie from the prestigious theater director, who debuted at the cinema with American beauty (1999), and he has done two of the most circumspects bonds (Specter Y Skyfall), It is born of his desire that some memories of his grandfather’s generation not be erased in time. But, so that the viewer feels the same tragic frenzy as the protagonist couple, 1917 it is narrated in a single sequence plane – in reality, fusion of shots of about five minutes – that immerses in the mud and the battle to the public. “I saw many movies filmed like that, and each one is really very different. Although I may approach some time of Sons of men, by Alfonso Cuarón ”, tells the English filmmaker in a hotel in Madrid, stage of the world tour to promote a drama that opens in Spain next Friday. Tonight, in addition, she is a candidate for three Golden Globes (best drama, direction and soundtrack).

Question. His characters will never become nor footnotes of a history book, but they are two human beings fighting for his life. Nothing more and nothing less.

Reply. For me, the most interesting topic there is is the human being, that’s why I’m passionate about theater. In this movie I used the same part of my brain that I use for the theater. Interestingly, coming from the stage, the aspect of cinema that I enjoy most is the montage. However, in 1917, its sequence plane structure has returned me to the theater. On the other hand, it is the most cinematic film I have made, because it has forced me to wonder where I put the camera at every moment. There is a camera-character-landscape triangle that constantly changed to move from epic to intimacy … You can fall into laziness by making planes and planes. Here there is only one point of view, and you need to sharpen a lot so that it is appropriate to what you want to tell. It was as exciting as it was frustrating.

P. You stated that the second bond He had left him exhausted, and that was why he was returning to the theater. Given his staging, he doesn’t seem like a relaxed director.

R. For me the theater is relaxed because It takes place in a room … and it’s quiet. The process is relaxing. You investigate the character, inquire into his motivations and with very little you raise a story. In the cinema you are screaming all the time. I also confess that after two or three works you want to escape from that room and go out into the world, to the light, to the rain, to the air …

P. Has the speed with which you made the film overwhelmed you? He shot it from April to July and in December he had already released it.

R. In the last two weeks I did feel the pressure, when we were adding visual effects. On the other hand, there was never a downturn in energy, the process was a fantastic momentum… Although I confess that a couple of times I asked myself: ‘Why? Why did I get into this dump by myself? Anyway, the directors forget too often that we have to tell important stories.

P. The Great War was the last one in which the troop was naive, followed the orders without questioning them, and the first with machinery of the industrial revolution. In the film these two conditions are constantly emphasized, unlike his other war film, Jarhead

R. It was the war in which innocence was lost, because until then there were no visual testimonies of the fighting. And the nineteenth century ended with its divisions of cavalry and saber duels. Humanity entered the contemporary era, with weapons of mass destruction. All that fascinated me. There are not yet modern communications, each officer affirms something different and the public is locked up with the protagonists at that time.

P. It’s not exactly his grandfather’s story, but when did he feel that his stories served as the basis for a script?

R. When I told them to the grandchildren, no, because at 12 I didn’t know what I was going to do. Notice, he never confessed to his children and yes to the next generation. I was impressed by the idea of ​​an envelope with an important message to carry, and that was the seed. Another detail that attracted my attention is that he constantly washed his hands: over time I suspected it was an unconscious gesture to remove the mud from the trenches. I wrote this script at the same time as that of Specter, I had time to macerate it. When I filmed the sequence shot of the beginning of SpecterI felt I was prepared for 1917. Because, after all, there was only one instruction on the cover of the script: it would be filmed in a single shot. I will return to the plane and backplane, but I have learned that you have to match the format with the content. Every story needs its shape.