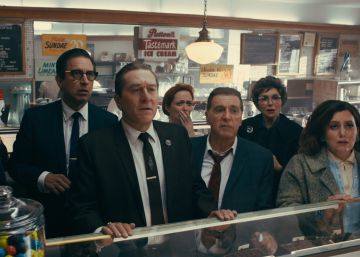 Next to some awards given last night by the Association of the Foreign Press of Hollywood (composed of 92 voters who managed to be relevant as soon as the ceremony began to be broadcast on television), Ricky Gervais joke about Judy Dench -which in Cats It embodies a veteran cat - raising one leg lying on a carpet and licking "the parrús" looks like an innocent joke, made of childish children during lunch. That Taron Egerton is best comedy actor for his work in the banal Rocketman, what 1917 I raised the main prize, the Golden Globe for best drama, to The Irish, that Sam Mendes snatches the statuette from Martin Scorsese for better direction ... Cry out to heaven. Only the two prizes to Tarantino, which took the best script and best comedy or musical with Once upon a time in ... Hollywood They can be defensible in the Oscar race. The same applies to the score of Icelandic Hildur Guðnadóttir for Joker: the best of thriller

When at the end of the ceremony they began to collect statuettes drunk stars (huge Brad Pitt at the end of his speech claiming a quick transfer to a sink), any spectator must have thought: "Just like those who voted in these awards". For years the Golden Globes wanted to be the ceremony that marked the Oscars. This year, even its advance steps on the votes for the nominations for the Hollywood Academy awards, which close tomorrow, Tuesday 7 and are announced on Monday 13. In recent years, with the growth of the Academy, the Union awards Producers (whose candidacies are announced tomorrow 7) and the Actors Guild (which are delivered on January 19) are much more significant and provide clear clues about what will happen weeks later at the Oscars.

Maybe that's why the Golden Globes journalists have decided to blow their heads. With contradictory decisions: as a clan, they usually travel around the world to festivals and shootings paid by majors. Maybe that is where his decision came out that Netflix, which came with 17 nominations in film and another 17 on television, only won an award: best actress in a dramatic series for Olivia Colman for The crown (She at least did confess on stage that she had climbed with extra champagne) .. Netflix doesn't pay for trips. Although, in return, choose Mr. Link: the lost origin as best animated feature film above the three of Disney would seem a brave decision against the study of monopoly.

With his decision not to include the Korean Parasites In better drama, the Golden Globes have ignored the runrun that is shaking the awards season, where it sweeps as the best film. So, dry. A few days ago, in a meeting in EL PAÍS, Pedro Almodóvar commented on how impossible it is to fight against a winning wave, and Bong Joon-ho is riding one. Last year, at this point in the game it seemed that Rome, after the choteo of the HFPA (acronym in English of the association of the foreign press) that preferred Bohemian Rhapsody to the drama of Cuarón, he could win the Oscar for best film. On this occasion, Netflix has tripled its bet with the winning mackerel the Irish and the placed Story of a marriage Y The two potatoes And suddenly Bong Joon-ho appeared. Can a foreign film win the main Oscar? For the second time in a row we face the question and for the second time it would seem so, if it wasn't ...

If it was not for Once upon a time in ... Hollywood, of Tarantino, who would be the Green book of 2020. It is a film that the whole industry likes, that talks about the industry, and that is full of stars. It would be the first time that Tarantino - who insists that he is only going to shoot another film before retiring and that he released on the stage that he will be a father - won the main Oscar. It would be the agreed solution.