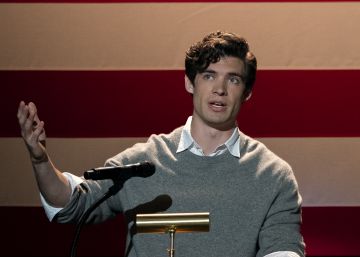 Netflix published a few days ago a list with the most viewed content by its users in 2019. At the head was Criminals in the sea, a film of the house, starring Jennifer Aniston and Adam Sandler, and seen, according to the platform itself, by more than 30 million users after its premiere on June 14 last year. Then there was the third season of his flagship series, Stranger Things, which – always according to the platform – became the most watched in the history of Netflix in July, with 40 million views the first month (of these, only 18.2 million had finished the full batch of chapters). It followed a Michael Bay action tape released by them, 6 Underground, epic fantasy The Witcher, which has managed to enter the list despite having been released on December 20; The Umbrella Academy, the series of a family of superheroes, and then some movies released and created by Netflix: the Irish, of Scorsese, in the fifth position; Triple border, with Ben Affleck and Oscar Isaac, in the seventh and The highway Men, a production about Bonnie and Clyde and with Kevin Costner in the tenth. Removing the Scorsese movie, which premiered in theaters, all these titles have something in common: none aspires to a single Golden Globe, the most international television awards, and that are delivered on Sunday night in Los Angeles.

In December, Netflix became the studio that receives the most nominations in a single ceremony: 17 for its movie premieres and many others for its series, among which are the beautiful critics children like The Crown, Believe me, The Politician or The Kominsky method. That day, the platform also began to embody the crossroads in which, more and more, television production is stranded. The number of premieres of series rises every year, from 487 in 2017 to the record of 530 productions only in the United States in 2019; With an increasingly aberrant offer it is more complicated not to say what is the best of each year, but to align the public and critics in concrete trends. The relevance of an award depends on it.

Until now, the traditional tension between the most watched and the most awarded had remained in relative tables. Mad men, which had a famously low audience during its seven seasons, ended up winning five Golden Globes (three best drama series and two to its protagonist, Jon Hamm). But on the other end is The walking dead, the zombie series, considered a minority product but that has been on the air for ten seasons: five of them as the most watched series on American television and nine as the most watched on cable. At least she was nominated for a Golden Globe for best drama series. Public and critics lined up on that. It was in his first season, in 2010. That year 216 series were made.

In 2019, the number of productions shot has had special difficulties to fit in the five nominations of the 11 awards that the Hollywod Foreign Press Association has given since 1944. Since they were announced on December 9, critics regret the lack of big favorites: That’s how they see us, about racism in the New York of the eightiesor Russian doll, an existentialist fantasy (both on Netflix). The public wonders where it is Game of ThronesBy far the most watched series last year, or Euphoria (both from HBO). And in the middle, the Golden Globes, which for years was the progressive brand that equated television with cinema, some less corseted Oscar, that is, with more freedom. In 2009, the Academy Awards extended to ten the nominees for Best Film, precisely so as not to turn their backs on the public’s favorites. Now, the Golden Globes must decide what to do with such a series.