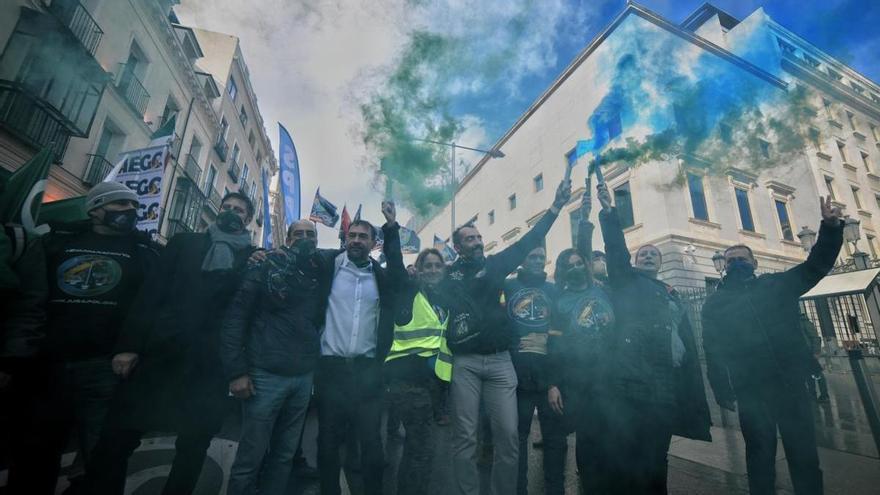 The police unions that held Saturday's demonstration against the reform of the gag law in Madrid later claimed that the protest was "unprecedented." They were absolutely right. There is no precedent for police and civil guards to have demonstrated for political reasons in Spain against the Government and Congress or against the outcome of the elections.

Police rebellions sometimes occur in Latin American countries with dire consequences - the last was in Bolivia - but not in Europe. Now the unions that have the most support from the agents have decided to become a kind of police lobby to join the ranks of the right in the fight against the coalition government. They are the security forces of the State, but the last word has been hanging from the name with an asterisk.

To give the march an even more anti-establishment air, people with symbols of the Jusapol union lit green smoke flares at the head of the demonstration as they passed in front of the Congress of Deputies. "This is where we have to be heard the loudest," said the public address system of the vehicle that led the way. There was the paradox that the police frequently act against those who light them in the street - it is usually an indication that something bad is going to happen - but this time it was the police who set them off.

They also did it at a time that was supposed to be more solemn, when the march stopped to make an offering of flowers at the monument to those who died in Spain on the Paseo del Prado. The flares, a favorite instrument of the hooligans in soccer, did not match much with that place. It is not usual for heads of state who visit Spain to stand before the permanent flame with a pyrotechnic device. But there were those in charge of putting some smoke in the appointment, along with those who placed the flowers on the fence that surrounds the enclosure. It was the day to go overboard.

The guy on the public address system was working hard and falling into the inevitable surreal moments. "We are not going to allow the politicization of the security forces," he yelled at the top of his lungs and without being aware of the sarcasm. A couple of rows behind the head, that is, in a privileged position, the Vox staff circulated, headed by Santiago Abascal and receiving applause from the attendees. Jusapol and its two brands in the union elections of the Police and Civil Guard, Jupol and Jucil, have signed the spirit and the letter of the far-right broadside against the Government.

Vox was circulating in friendly territory. It is the Popular Party that lately offers the picturesque moments. Isabel Díaz Ayuso went to the Puerta del Sol to make some statements and immediately went back inside, lest she had to see Pablo Casado. He spoke of opposing "a resentful minority", words that must be remembered if the reform of the Law for the Protection of Citizen Security is approved with an absolute majority of 188 votes, as has happened with the budgets. Martínez-Almeida stayed at the demonstration, who must already be used to eating the browns of his party.

At that time, Casado's car was burning rubber from León to arrive on time, driven by a Max Verstappen fan, and taking his foot off the accelerator at the height of the radars. The leader of the PP had time to reach the end of the demonstration - for someone to deliver a Christmas bonus to the driver - just when the statement was being read. Diaz Ayuso was not found, so the day did not end in an embarrassing way for him.

In previous years there have been protests by police officers for reasons of salary or lack of equipment, which is logical. In this case, it was impossible, because the salary of the State Security Forces has risen on average 21% in the last three years to match them with the salaries of the Ertzaintza and the Mossos. In addition, the workforce has been increased, 5,000 more for the National Police and 8,000 for the Civil Guard. No other profession among state officials has enjoyed such advantages.

They should be happy, almost enthusiastic, but the parties that support the Government have committed the sin of wanting to reform the so-called gag law. That is the law that was approved with the votes of the PP in 2015 to punish the demonstrations due to the economic crisis and try to deter protests in the street with fines of at least 600 euros. They also wanted to prevent citizens from taking photos of police charges in the most violent moments.

The final statement of the demonstration resided in a parallel world in which the reform approves things that it does not really approve and prohibits things that it does not actually prohibit. It is what in these times is called a disinformation campaign. "This law favors the criminal," said the journalist who read the text. In case it is necessary to remember it, the Penal Code continues being the same.

"The privacy of a police officer is not touched." Privacy does not have much to do with taking images on public roads and police officers cannot have rights above the rest of the citizens. The reform is limited to include what the Constitutional Court ruled in a sentence in November 2020, because in reality it was not even formally prohibited in the PP law. The demonstrations "without prior communication will provoke altercations," said the manifesto. In that case, the police will act as they always have, drawing their batons, which will also happen with the new law.

The reform of the gag law states that the exposition of the facts that appear in the police reports must be "coherent, logical and reasonable." The unions allege that this means attacking the presumption of veracity of the agents. The same is that they do not believe them capable of writing coherently and logically.

At the end of the demonstration, some officers threw ping pong balls, because, they say, they will no longer be able to use rubber balls. The new law is not expected to prohibit them. In any case, they imply that they will be left defenseless, which is a situation in which riot police have rarely been seen when they decide to charge.

The manifesto was actually more subdued than the tone of recent statements from police unions on what will happen if Congress passes the bill. They are almost indistinguishable from a Vox release. "The chaos". "The Triumph of Anarchy". "A real hell". They are the things that have been heard in recent days.

It would not be a drama if the people who believe this did not carry firearms to carry out their work as civil servants.