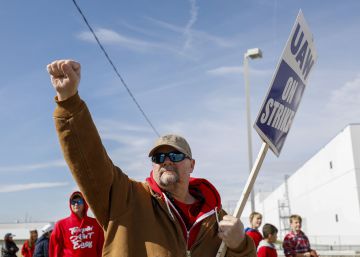 General Motors reached an agreement with the negotiators of the United Auto Workers union to end a month of strike, seconded by some 49,000 employees in about thirty production centers in the United States. The new four-year labor contract must still be ratified for the end of the first strike in 12 years. Investors did not wait and the manufacturer's shares revalued more than 2%.

The strike began on September 16 and forced suspend production in factories in Canada and Mexico due to the lack of components. The vote of the pact between the management and the union will take place this Thursday. In the coming hours, therefore, employees may be allowed to return to work if the agreement prospers. It is estimated that the labor dispute cost more than 1.5 billion dollars for the company.

The strike was called after several months of negotiation. The litigation was one of the topics that was addressed during the last debate of the Democratic candidates for the presidential elections of 2020, who showed their support for the protest. US President Donald Trump, however, chose to keep his distance and asked the conflicting parties to reach an agreement as soon as possible.

The details of the new contract must be made public. UAW local leaders planned to meet this Thursday in Detroit, which was interpreted as a sign that the two sides were close to reaching a compromise. GM CEO Mary Barra held a meeting Tuesday with the negotiators of the UAW, to try to approach positions and overcome the blockade.

This is the longest strike that affects GM operations since 1970. Unions claimed a majority of the company's profits through an increase in bonuses, better health coverage and guarantees that production will not be relocated to other countries with cheaper labor, following the closure of four factories announced in November by the multinational.

The GM management, meanwhile, revealed during the negotiation that it was going to allocate up to 7.7 billion dollars to investments in the US for the development of the electric car and promised to create several thousand jobs affiliated with the union over the next four years . "The priority has been to guarantee a robust and fair contract for our members," said UAW Vice President Terry Dittes.

The details of the agreement principle will still take two weeks to put on paper, but it is not ruled out that the employees return to their positions after the vote of the leaders of the UAW. Once the process of ratification of the new contract is completed, the union will be able to use it as a pattern in the negotiations it has open with Ford Motor and Fiat Chrysler.

It is the first strike called by GM employees in more than a decade. Market conditions forced the company to try to reach a pact to prevent the ballast from being much greater, at a time when sales are moderated. The union, meanwhile, had to increase the compensation granted to employees who did not attend work.