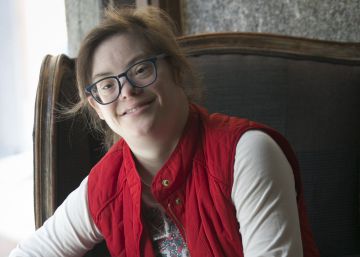 Gloria Ramos has an ordinary life. Theater classes, a part-time job at a sportswear store in the center of Madrid. Also some compromises, sometimes more than you would like. In the next few weeks, he has on the agenda a meeting at the Teatro Real with the cast of Champions, The Goya winning movie 2019, with which she became the first actress with Down syndrome nominated for best revelation actress. Then, the premiere of a play. And finally, promotional acts from Merlí: sapere aude, the new series that Movistar + premiered the week and takes up the well-known Catalan series.

In the latter, the actress (Madrid, 26 years) gives life to Laura, the daughter of a provocative university professor María Bolaño (Maria Pujalte), a woman who, Ramos reiterates several times, reminds her mother, Loli, her "Mrs. Mother", as she prefers to go to the parent, who accompanies her in the interview. A gesture that shows how the one and the other get along: in volandas. There is a difference between the two mothers, which she wants to make clear: "The thing to hide the drink or throw it in the trash, not that, only Laura does with the mother of the series."

In 2017, the family received a phone call with which they offered Gloria to participate in the impending casting from Champions He was caught in the mountains of Madrid, and doubted whether or not they returned to the capital for the test. With Merlí, the problem was another, the actress's mother confesses. The series, famous for its explicit sex scenes, generated “some suspicion”, which soon dissipated. Ramos wanted to participate and the family, including the father and the three brothers – "even the Barbarite," says the actress, referring to one of her sisters – encouraged him. She never thought about it too much.

"It seems good to me, in general, any role, be it a theater, for a movie, a series …", he says. "Even with a musical I would cheer up," he thinks. "And, well, it also helped that Bruno (David Solans) and Pol (Carlos Cuevas) were there," he continues slyly, referring to the two coveted protagonists of the series. Like Pujalte, which seems "majestic", Ramos loves this pair, and on which he actually gets wet: "More the first".

In fiction, Ramos is a daughter responsible and concerned for the health of her mother, María, the teacher in charge of occupying the huge gap of Merlí in this sequel. The story this time he moves from the classrooms of the Àngel Guimerà Institute to the turmoil of the first university days. The actress values ​​her role as "incredible", which does not deter her from one of his true "dreams": play some "evil" character.

Almost daily he immerses himself in his favorite universe, that of The descendants, a franchise starring the children of Disney villains (Maleficent, Cruel De Vil …). It is then, between movies (they are already going for the third), books or soundtracks when you have more fun. "I really like action movies," he says, adding that he would not necessarily like to play a villain who is already a classic. She lives at street level: "If I could play a role of someone as bad as bad as who I know … Well, I would do that." The date has sounded at least as a joke.

<> After the success of Champions – Spanish film highest grossing of 2018 with 3.3 million viewers – Ramos stayed at the gates of Goya for best revelation actress. He promised himself that one day he would win it. And it is clear: if it were not with the role of a "bad bad," he would like it to be interpreting to a woman “even stronger” than Collantes, that brave basketball player who made her known to the public. In it is.

She looks more like this role than the villain, if only because she sells sneakers in the middle of Madrid's Gran Vía while, like so many, she prepares to devote herself to what she likes. His coworkers know it. "I tell you, I'm fine here, but only until the day I do television, huh?" You have already taken your first step.

The leader of Los Suaves, convicted of a crime of coercion of his ex-partner