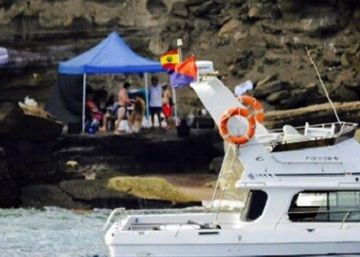 The trial against Sergeant of Seprona in Lanzarote, Gloria Moreno, has been seen for sentencing this Wednesday, a day earlier than planned. The Prosecutor's Office accuses Moreno of falsification in an official document for denouncing internally that one of his subordinates was a sneak who alerted the poachers of cinderella shear on the islet of Alegranza, north of Lanzarote. The agent designated as sneak, Miguel Ángel Padial, has exercised the popular accusation. The Prosecutor asks Moreno for up to four years in jail.

The sergeant of Seprona has become despite himself a character well known in the Canary Islands for his fight against poaching in the islands and for the alleged campaign of harassment that their superiors launched against her after carrying out an operation in which she hunted a group of poachers on the islet of Alegranza in 2015. The practices of these poachers, who annually anchored in the islet – belonging to a natural park – to loot and eat the chickens of cinderella shearwater, a protected species, were voxpulp in Lanzarote, but the Civil Guard interventions failed to surprise them.

When a witness told Moreno that there was a civil guard who alerted the pardeleros, he informed his superiors in writing through an official letter. The alleged sneak, Miguel Ángel Padial, denounced her for falsehood and slander and asks for her six years in jail. In the trial the person who gave the information to Moreno, a CSIC field technician who works several months a year on the uninhabited islet of Alegranza, has declared. "I told him what I knew, that I had heard that one Miguelito was warning one Carlitos," he said, according to legal sources present at the trial, and added that in Lanzarote it was voxpulpuli that the civil guard warned the stealth.

Carlitos is, according to legal sources, Carlos González Berriel, one of the poachers who was surprised at the 2015 operation and who recently He has been convicted along with nine other people for hunting and cooking protected birds. On that occasion the sergeant set up the cover operation, with guards from the maritime patrol of Fuerteventura outside his unit, in which he suspected there was a mole. Moreno told his superiors that the scientist had told him that González Berriel had escaped an intervention in 2013 following the warning of a guard from the Seprona of Lanzarote.

In the trial he has declared a second witness, Enrique Jordán, who ratified what he told him in an interview with a Canarian journalist, Sergio Calleja: that Padial was the sneak. Enrique Jordán is one of the owners of the islet of Alegranza. He met Calleja and told him, as one hears in an audio recorded by the journalist: "I know that Miguel Ángel Padial is a sneak peek of this story since he came to Lanzarote." Jordán, who claims to be friends with a brother of González Berriel, adds in the recording that it was he who helped Moreno plan the operation to catch the gardeners. The audio was not heard during the trial because both Jordan and the journalist Calleja were ratified in their content before the court.

The prosecutor of the case, Ramona Muñoz Casas, asks Moreno for four years in jail for a crime of falsehood in an official document and subsidiarily false for imprudence. In his indictment he noted that the sergeant had sent the official letter "knowingly" that its content was not true, but in the first session of the trial he proposed an alternative qualification, that of falsehood due to imprudence, for not having made checks on the veracity of the information This qualification carries a penalty of fine and one year suspension.

Moreno said during the trial that it would have been a crime "not to prepare that report" because it would have meant "to cover up Padial." He also noted, according to EFE, "the high danger of people who have threatened" his informant. The defendant also said that this case is not related only to the hunting of shearwaters in Alegranza, but also to the "drug trafficking" that "a plot" develops in the Chinijo archipelago. Finally he said that "the damage to the Civil Guard is already done" and asked "who will now have the courage to enforce article 40" of the law that regulates the disciplinary regime of the body, which obliges any guard who Be aware of an irregularity committed by a body mate to report to his superiors.

A military judge in Madrid has just accepted a complaint that the sergeant of Seprona presented against her superiors who, according to her story, harassed her on the basis of opening files after Alegranza's operation.