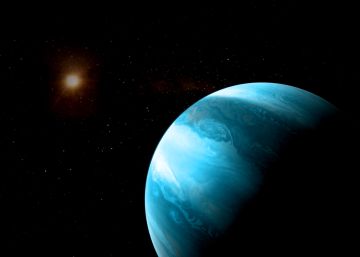 A group of astronomers today proposes a trip to a not too distant planet that should not exist.

For a few years, the Carmenes instrument, mounted on the telescope of Calar Alto, in Almería, cartography the stars closest to Earth. These are red dwarfs much dimmer and smaller than the Sun. In some of them has discovered terrestrial planets where there can be liquid water and therefore life. The need to include more small stars on their map led those responsible for the instrument to look towards GJ 3512, initially ruled out as being too weak.

In this 30-year-old star, astronomers have discovered a giant planet with a mass equivalent to half of Jupiter, about 150 times that of Earth. His interest is not in his habitable potential, because it is a hostile sphere of gases at more than 120 degrees below zero due to the little heat that his star gives him. The surprising thing is that according to planetary formation theories this planet should not be there.

Until now it was thought that gas giants are formed when rock fragments come together in the protoplanetary disk surrounding a star to form spheres with a mass equivalent to several times that of the Earth. These nuclei serve as a seed for hydrogen and helium, which begin to wrap it up to form huge gossip colossi. But the star GJ 3512 has a diameter about seven times smaller than the Sun, too little to accumulate enough rocky material. According to current models of planetary formation, "never" could there be a world like this, explain the authors of the finding, that is published today in the magazine Science.

This study is the vanguard of a new era, says an astronomer

"It is the first time that such a planet has been found in such a star," highlights Ignasi Ribas, an astronomer at the Institute of Space Sciences, in Barcelona, ​​and co-author of the study, signed by an army of more than 180 astronomers from 12 countries Because of the shape of the planet's orbit, very elliptical, researchers believe there are two other gas giants that have not yet been able to detect, but that influence their trajectory. "One of them drifted shortly after its formation billions of years ago and is now a lonely planet that travels through interstellar space," Ribas explains.

The finding gives wings to a theory that says that in the right orbit and at the precise temperature gases can accumulate on their own to form a planet without a nucleus. Until now this hypothesis had not been taken into account, because there were no known cases and it is very difficult to demonstrate whether these types of worlds have a solid heart: everything indicates that Jupiter Y Saturn They house it, but it has not been confirmed. The finding of this new planet forces us to review the classical theories and perhaps add an alternative way of lighting giant giant planets of the red dwarfs, which are the vast majority (80%) of all the stars in our galaxy, the Milky Way.

"This study is the vanguard of a new era," says astronomer Greg Laughlin of Yale University (USA), in a comment published next to the study. The discovery has been made with a planetary detection method that measures the sway of the star when the planet passes near it and displaces it with its force of gravity. This phenomenon allows detecting planets even if they do not pass in front of their star producing an eclipse. The gravitational effect of the planet on the star can be captured both in light of the visible spectrum, something more common, as in infrared, a newer technique. This is the first planet hunted thanks to the infrared part of the Carmenes instrument, which was the main contribution of the Spanish research centers to the international consortium that developed this device. In the near future, writes Laughlin, similar instruments mounted on telescopes in Chile and the US may be able to hunt Earth-sized planets around stars like the Sun.