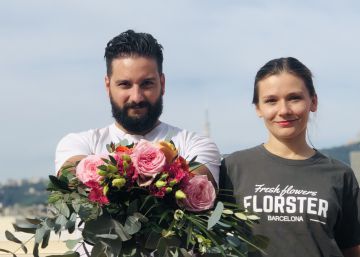 Flower reception immediately activate feelings of enthusiasm and happiness, according to a study by the University of New Jersey. “Seeing the excited expression of the loved one receiving the bouquet is priceless,” smiles Elena Zhabreva, a Russian economist based in Barcelona and CEO of Florster. The history of his venture is as sweet and atypical as the filmed installment itself. He started the project in 2018 with his sentimental partner, Venezuelan engineer Manuel Gouveia, who is in charge of digital marketing and product optimization, but neither had experience in the sector. They did not need or ask for financial (or other) help and from day one everything went smoothly after putting 50,000 euros of their own. With seven employees, last year (its first full financial year) they invoiced 160,000 euros and reinvested 30% of the benefits. “They have offered us investment several times and participate in the business, but we prefer to maintain our autonomy,” Zhabreva says with aplomb.

Florster’s activity has a pastoral fable aroma. Its distributors place the bouquet in a coffee bag inside the basket of their bicycle, they install the GoPro in the helmet and they are filming the route until they arrive at the destination and capture by surprise the emotion that produces the sheaf of flowers in the gift. Then they ask for their consent to edit and send the video to the client (“98% say yes”).

The couple of entrepreneurs made a market analysis and calculated their project in detail. First they chose a traditional sector such as florists, because there innovation has more revenue. “When your message is different, advertising goes cheaper because there is a better conversion rate (the same ad impacts more and gets more customers),” says Gouveia. Then they realized that 70% of the people who buy flowers are women, who give away to other women, and it turns out that the target audience of most florists is men. They also brought down the myth (masculine) that a bouquet of red roses is the most romantic for a woman. Not at all. They prefer the variety. Then they discovered that people do not care so much to choose the type of flower and that the more varieties of bouquets you offer, the less you sell. From there they came to one of their hallmarks: offer a single bouquet, but different every day and in three sizes, that Zhabreva produces every morning in the fertile Catalan region of Maresme. “With that, in addition, we avoid throwing a lot of flower,” adds the businesswoman.

From that study they also extracted that the majority of customer complaints in the sector point to poor delivery accuracy. They guarantee it in a maximum of two hours. “The rigor in sending flowers is comparable to that of fast food delivery, not regular courier delivery. It is not the same to receive flowers than shoes, ”Gouveia testifies.

Florster already projects its growth outside of Barcelona. In the short term, Madrid and other European capitals will begin to see bouquets of flowers traveling through its streets on a bicycle basket.