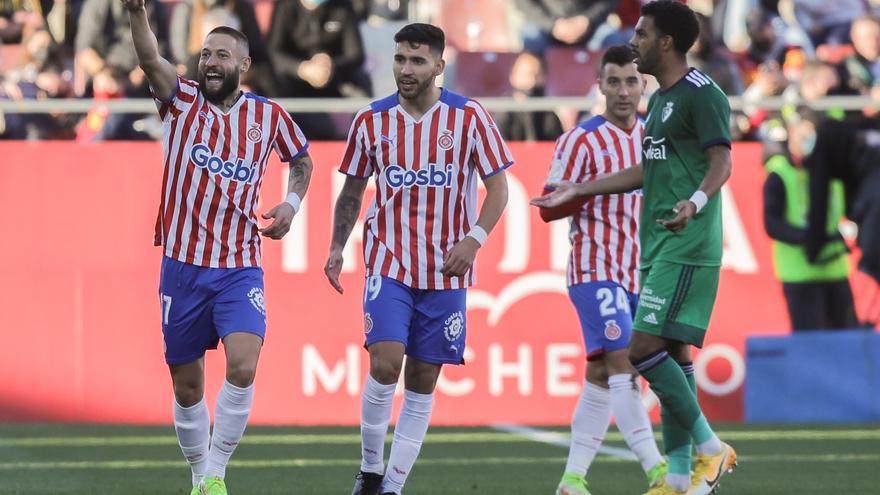 The whole of Pamplona linked lto third defeat in a row, while Girona, consolidated in play-off positions for promotion to First Division, celebrated a prestigious victory, the fifth in a row in Montilivi, and confirmed its good dynamics: six wins in the last seven games.

After ten consecutive days without winning in the league, Osasuna began the match by pressing hard, pushed by the obligation to give himself a joy to regain his smile and begin to come out of his crisis.

But Girona, armed with a 5-2-1-2, moved the ball judiciously, and in minute 6 Santi Bueno assisted Juncà with a great pass to the back of the rival defense and the '17' surpassed Juan Pérez with a crossed shot.

The visitors tried to take a step forward with the advancement of the first act, although without knowing how to turn his timid dominance into scoring occasions, Not even in a sense of threat for Girona, very comfortable with the scoreboard in favor and very reliable in defense, with the young rookie Biel Farrés.

Osasuna tried to match the match with more pride than success. And in fact, he only disturbed Juan Carlos Martín in the last action of the first half, with a shot from Chimy Ávila neutralized between the local goalkeeper and his right post.

The meeting followed the same script after halftime. The visitors approached the local area with a couple of shots from Roberto Torres, but Girona seemed to have the situation under control and seemed closer to 2-0 than the draw. In minute 58, Nahuel Bustos once again made Montilivi despair when he missed a measured pass from Álex Baena that left him alone before the goal.

Osasuna redoubled its bet for the tie with the entry of Kike García and Ante Budimir, who touched the equalizer with two shots, but Montilivi's men, in an exercise of trade and solvency, certified a new victory that will allow them to be in the draw for the knockout stages of the Copa del Rey.

Incidents: Match of the round of 32 of the Copa del Rey played at the Municipal Stadium of Montilivi before 3,649 fans.