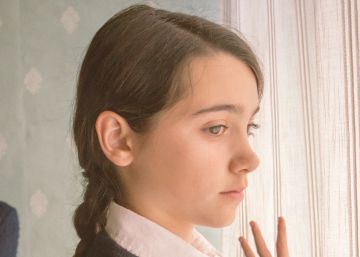 In 1992 Celia is 11 years old, lives in Zaragoza and studies in a religious school. So far come the similarities between the protagonist of Girls and its director, the debutant Pilar Palomero; the film is screened in the Generation Kplus section of the Berlinale, before it opens in Spain in the Malaga festival. “It’s not autobiographical, but the whole context of the story, the Zaragoza of 92, the college of nuns, the disco, the trampolines …, are part of my memories,” he says. In Berlin Dovecote “I wanted more than to create a plot with elements of narrative turn to boost the emotional part, that the public put on the skin of Celia, at that moment when you jump from childhood to preadolescence and little by little you discover a world that it opens”.

Girls It takes place in a Spain still quite repressive (Celia has no father, at school that stigmatizes her and her mother does not talk to grandparents), which, the director emphasizes, has unfortunately found an echo today with details such as the parental veto . “I would like that Girls Open a debate about how our education is, how it was at the time, how we have to change it. Reflecting on education never hurts. “A Spain in which there is still an imbalance between men and women.” They do not appear much, but their echo is there, in the messages of submission that Celia receives, from a future as she loves From home. When I finished the script I realized that there was not much male character because at that age I only related to my father, my brother and my two cousins. I had no friends. For me and my friends the male sex was something unknown. That distancing causes orthopedic relationships between boys and girls, naturalness disappears, fluidity between human beings, “he says. To do this, the director has portrayed the atmosphere of a disco at the time, with the typical clumsy approaches between them: “They asked you to roll, when neither they nor we wanted it. They probably preferred to chat, but we didn’t know how to communicate. “

Is not Spain still anchored in some of those positions? “First, there are people who are surprised that in 1992 we were with such a backward mentality. How wrong. Second, with the finished film, I have given several talks in institutes and I have seen professors worried about the rebound of machismo among teenagers. I’m not looking for that reflection with the movie, but I think education goes far behind the times. Look on the Internet. How are we educating on porn on the web? ” In Girls a poster of the famous campaign “Put it on, put it on” appears, as opposed to the chastity messages they receive in the nun’s class. “We are the fruit of what we received in those years, and we have come out quite well. In the film I try to make the audience remember those contradictory messages on television. You went from what the religion notebook told us to appear on TV Mama Chicho or Jesús Gil in the jacuzzi. And nothing surprised us, it was normalized. “

Palomero’s film follows similar steps to Summer 1993 (2017), by Carla Simón: both are produced by Valérie Delpierre, both of which are debut directors, began their journey in Generation Kplus before seeing each other in Malaga, both have girls in the Spain of the nineties. “I have struggled a lot to get ahead of the project, for a while I silenced my doubts by understanding the personalities of the script. I wish I did half as well as Carla Simón.” Palomero’s career started at Ecam, the Madrid film school, graduating in photography direction in 2006. He worked in that field and in scripts, until in 2013 he was one of the 16 filmmakers selected by Béla Tarr to participate in his project Educational Film.factory in Sarajevo. “There I met again and understood what I wanted to do: cinema.”