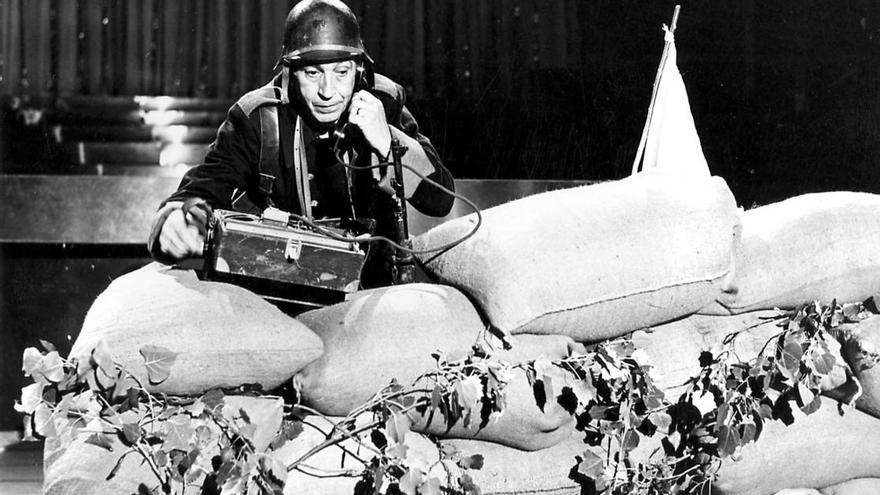 “Hey, is it the enemy? What time are you planning to attack tomorrow? Can’t it be in the afternoon, after football?” It is probably the gag best known in the history of humor in Spain. It doesn’t matter how long it takes: the laughter it provokes is intergenerational. The person responsible for these laughs is Miguel Gila (1919-2001), who in his own right became one of the most important comedy figures in the country and who now, 20 years after his death, is honored by some of the most important monologues of the current scene.

“It means a lot of responsibility. If you compare Gila’s worst day with my best day, I lose by a lot,” says JJ Vaquero, one of the comedians who are part of the tribute. Everything is Gila which will be held in the form of a function on November 9 at the New Alcalá Theater in Madrid. Along with him are other prominent comedians such as Dani Rovira, Joaquín Reyes, Ana Morgade, Pantomima Full or Carolina Iglesias and Victoria Martín, hosts of the podcast Stretching the gum that has recently won an Ondas Award. “It is very cool that it is a comedy show and above all that so many familiar faces of the current scene get together. I think it is good for people to know things from the past so that they do not think that everything from now is new,” says Iglesias .

And it is precisely Gila, despite the passing of the years, continues to mark the wake of laughter in today’s humor. Precisely for this reason, the comedians mentioned above plan to recreate some of the legendary monologues of the master of humor on stage, such as My life, The jokes of my people, The inventor grandfather, Violin concert or I died. And precisely the The enemy, probably his most famous text, has been Ernesto Sevilla. “It is a real honor, because a comedian like Gila is an absolute legend and that is why it is important to pay him this tribute,” acknowledges the comedian.

“He is one of the people who carried out absurd humor at a very delicate moment, and joking with issues that were actually sensitive at that time, such as war. He played a lot with limits,” appreciates Iglesias. And it is that, despite the fact that Gila’s leftist militancy was widely recognized, since during the war he joined the Socialist Youth and was a volunteer in the Fifth Regiment of the Second Republic, his humor could have presence in such a complex time like that of the Franco dictatorship. With his monologues, he managed to talk about the Civil War in a period in which escapism and the forgetting of the conflict prevailed. “Gila had to deal with that moment of censorship, but it was impressive because he even performed in front of Franco. It seems that everyone liked him,” Sevilla highlights.

It does not mean that Gila was not repressed or constrained by the restrictive laws of the time. He himself told in his autobiography, And then I was born. Memories for the forgetful (Issues of Today, 1995), that “they shot him badly”, since pretending to be dead he managed to save his life and that of a comrade in his regiment. “They were a group of Moors with stomachs full of wine. There was no ‘ready, aim, fire’; they shot all 14 men once, without finishing us off with the coup de grace and they continued to drink while roasting stolen chickens. I stayed all night pretending to be dead in the rain, “the comedian recounted.

Bringing society into comedy was one of Gila’s goals, though his monologues rarely featured anyone in particular. It dealt with more general aspects, such as drinking, eating or friendship, and that is why they remain so valid years later. “If I want to make humor about the parties I put the Cigala and it works for me, but that Gila does not do it and that is why the time that passes does not matter. In the end, many of the famous that we put as an example the monologues are very ephemeral. And right now if you talk about The island of temptations you’re already very close to getting people’s laughter. But will we meet her in 40 years? “Asks Vaquero. Sevilla is in the same vein, who thinks that in his monologues, although it can be intuited that he deals with issues of the time, they can” be transferred to the present perfectly ” .

Gila addressed aspects of society that have not changed much. Although, from the point of view of Carolina Iglesias, “there are things that luckily have evolved in humor.” “Not offending minority groups is something that I think is necessary. We have many things in common with the generations that advance us, but luckily in others I think we have advanced,” says the screenwriter.

It is what some sectors call “political correctness”, but it is not so much a question of putting doors to humor as of being clear about which groups to address and in what way. “What happens is that people do not want to review themselves. I am 28 years old and I am constantly reviewing myself because I want to be a better person, not because I want to fit in anywhere,” argues Iglesias. She adds that for her the humor has to be “from the bottom up, and not the other way around.” “It is very difficult for me to laugh with someone who jokes about people who have it more complicated than him,” he adds.

Gila stood out for his wit in humor, but there really was a field in which he was a pioneer in Spain: that of the monologue. “I think it was the first. I don’t know if he or someone was aware of what a single person speaking on a stage meant,” Vaquero appreciates about someone who marked the path to be followed by the rest of the professionals who would come later. “He contributed a lot and when the monologues appeared he had already traveled a path through him, because seeing him I have realized all the mistakes that I make,” says the comedian.