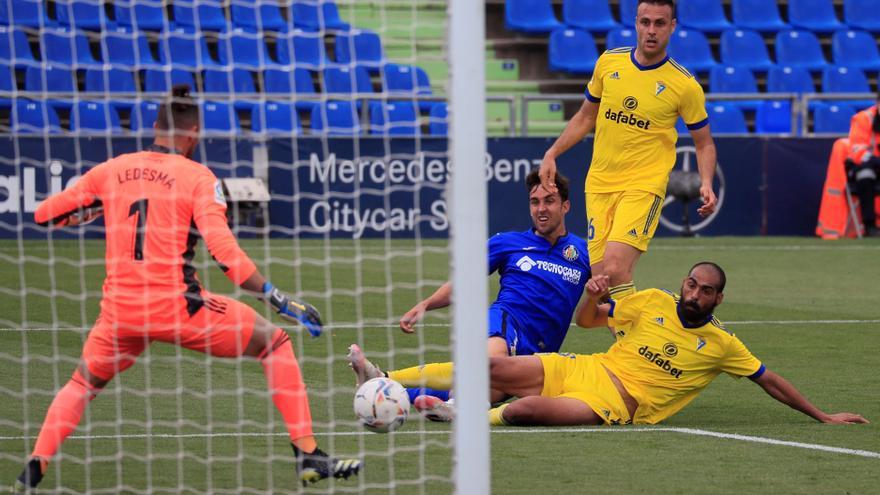 The Getafe lost 0-1 before him Cadiz with an own goal by David Timor and the day will end in a compromised situation, four points behind the descent and with a complicated calendar on the horizon: Real Madrid Y Barcelona they await the men of José Bordalás.

The misfortune of Getafe, once a dreamer of European feats, contrasted with the joy of Cádiz, who forgot a difficult week with his second consecutive victory after beating Valencia last day. Without a doubt, the Cadiz team will end the day calm after achieving an income of nine points on the dangerous positions.

The media noise that caused the alleged racist insult by Juan Cala to Valencia player Mouctar Diakhaby the previous day marked the eve of the duel of two teams that needed victory to take distance from drop stations. Álvaro Cervera’s pulse did not tremble and used to start Cala, who withstood the pressure without disheveled. Before, he greeted his former teammates and hugged his coach, José Bordalás. On the eve, the Alicante coach praised the good behavior of the defender of the Cadiz team, in Getafe for two and a half seasons.

All the fireworks surrounding the “Cala case” were over as soon as the ball started rolling. Soccer took center stage and the needs of both clubs came to the fore on the lawn of the Coliseum Alfonso Pérez. Especially those of Getafe, three points below Cádiz and closer to dangerous squares. Bordalás, in an attempt to give creativity to his team, lined up Japanese Takefusa Kubo for the sixth time, who was substituted in the 50th minute without making much noise while on the field.

With Carles Aleñà and Marc Cucurella, and well protected by the Arambarri-Maksimovic duo, Getafe clearly believed in their more creative version to end the resistance of a team that only jumped onto the field with the novelty of Rubén Sobrino in attack by Jairo Izquierdo. Bordalás’s script, a priori attractive, did not work.

Although Getafe was more dominating and had more possession, they barely managed to break one of the most coordinated defenses in LaLiga Santander. Without the long-awaited idea of ​​generating chances with more game men than muscle, the jam caused only two clear options in the first half.

The first was for Jaime Mata, who in a double shot almost below the line met Argentine goalkeeper Jeremías Ledesma and Álvaro Negredo, who avoided Getafe’s first goal. Later, the save was made by David Soria after a point-blank hit by Danish Jans Jonsson who did not exceed Getafe’s goal line by centimeters.

Everything was going to be decided in the second half, which began practically without Kubo from the beginning replaced by Ángel Rodríguez. Getafe, with more mobility, finally managed to take control of the shock and was about to open the scoring with a header from Togolese Djené Dakonam at the exit of a corner.

And, when Getafe was more comfortable, luck was allied with Cádiz, who found an unexpected gift in the form of an own goal from David Timor. A center of the Uruguayan Luis Alfonso Espino that rebounded in Aleñà misled Soria and after hitting Timor in the chest, he entered the goal of the azulón box.

The jug of cold water was tremendous for Getafe, who stopped carburing and got stuck wrapped up in the thought of another bad outcome. Throughout 25 minutes, he saved an attempt by Arambarri and a header from Ángel, the chances were conspicuous by his absence and he was defeated to get into a mess that he did not imagine at the beginning of the course when he was still living in a magnificent European hangover that will take some time return.

Incidents: match corresponding to the thirtieth day of LaLiga Santander played without an audience at the Alfonso Pérez Coliseum.