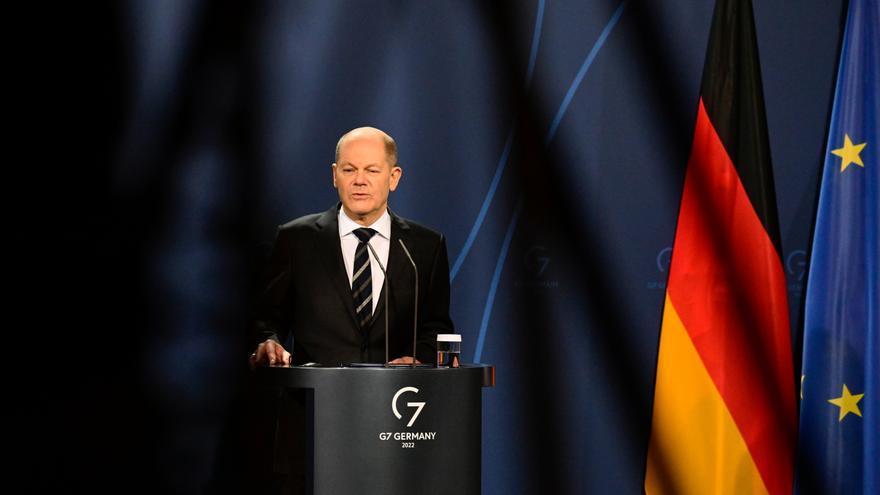 "A package of harsh sanctions". This is what German Chancellor Olaf Scholz and US President Joe Biden agreed on this week in Washington in the event that Russia invades Ukraine. With the threat of economic damage they seek to scare the tenant of the Kremlin, Vladimir Putin, so that he does not get away with it again to the detriment of Ukraine.

In 2014, Russia illegally annexed the Crimean peninsula and then strongly supported pro-Russian separatists in the Donbas region (eastern Ukraine). This conflictive geopolitical situation unleashed a series of Western economic sanctions against Russia in the promotion of which Germany and its then chancellor, Angela Merkel, played a decisive role.

That is why, for example, Russia no longer receives loans from the European Investment Bank (EIB) or the European Bank for Reconstruction and Development (EBRD). Business activity towards Europe by companies based in Crimea is also limited. So much so that a ban on the entry into the EU of products from Crimea has been implemented and certain goods and technologies cannot be sold to these firms either.

In addition, 185 people from the Vladimir Putin regime and almost fifty Russian organizations are subject to sanctions, since they are not allowed to travel to European Union soil and their bank accounts are frozen.

With Russia massing troops on the borders with Ukraine for months now, the discussion of how to tighten Western sanctions has returned to the international debate. But considering that "tough" measures are now being promised, the threat is looming over a sector that until now had suffered little – or nothing – from Western punishment: the energy sector.

Among the countries most dependent on Russian gas in the Union is Germany. According to figures from the German statistics portal Statistical, the country receives about half of the gas it imports from Russia. In 2020, the amount reached 46,000 million cubic meters, according to the accounts of the newspaper Frankfurter Allgemeine Zeitung.

Germany needs that and much more gas to carry out the energy transition that Olaf Scholz is now leading. The Social Democratic chancellor, who leads a coalition with environmentalists and liberals, wants to "decarbonise" the country. Carrying out these intentions, by 2030, Germany would consume 80% of energy from renewable sources. Before reaching that date and that percentage, natural gas must serve Germany to assume the energy "transition".

However, the current data regarding the purchase of Russian gas led the economic newspaper Handelsblatt to point out this week that "European dependence on gas, especially that of Germany, makes the West blackmailable".

Imposing sanctions on Russia for its actions in Ukraine implies energy and economic risks for Europe in general and for Germany in particular. This is so, no matter how much Western politicians like Scholz or Biden speak only of making Russia pay a "high price" if it decides to invade Ukraine.

Moreover, one of the maxims when it comes to imposing economic punishments is that "sanctions always affect the country that imposes them", as he told the German weekly Die Zeit Brian O'Toole, a veteran former worker at the Office of Foreign Assets Control. That is the US government agency dedicated, among other things, to the imposition of sanctions.

As they have stated in Die Zeitthat maxim "is especially valid for Germany", because "in recent years it has been getting closer to Russia in its energy policy".

In Germany "there are already companies that complain about the sanctions against Russia because they complicate their businesses, since traditionally there are companies in regions such as East Germany that do business in Russia," Hubertus Bardt, head of the Institute for the German economy, a thinktank dedicated to economic studies based in Cologne.

In general, the situation of these companies and that of anyone who wants to do business with Russia would be greatly complicated if it were decided to exclude Russian banks from the international banking system. Today, to trade internationally, the participation of banking entities is necessary. However, it is not those affected by the sanctions that are of most concern in Berlin.

What is perceived – rightly so – as really disturbing in Germany is a scenario in which an invasion by Russia ends up producing a boycott of Russian gas. That "situation would be complicated and would have economic effects," estimates Bardt. In his view, it is obvious that without gas there would be a shutdown of activity in the German industrial fabric. "Germany would be one of the countries that would be most affected," says Bardt.

Currently, Germany does not have its own access doors to liquid natural gas. If he wanted to compensate with this other type of gas for the closure of the Russian gas pipelines, Scholz's country would depend on others such as Spain or the Netherlands – which do have such access – and on the limited liquid gas market options worldwide.

"In the event of an invasion of Ukraine, the passage of Russian gas to Europe through that country would be cut off. Then Nord Stream 2 could be used - the second gas pipeline linking Germany and Russia across the Baltic Sea - but this option is something politically unfeasible," says Bardt, referring to an infrastructure that has already been completed, but has not yet come into operation. Nord Stream 2, under Angela Merkel, was given the go-ahead as long as Ukraine remains a transit country for Russian gas.

This week, in Washington, Biden promised in the presence of Scholz to end that gas pipeline in the event of a Russian invasion of Ukraine. Scholz, for his part, no longer defends the Nord Stream 2 as an "exclusively economic" project. Until not long ago that was his speech. He had copied it from Angela Merkel.

Now, however, in Germany they are open to paying important bills in the conflict between Russia and Ukraine. "Germany is prepared to pay a high price," the German Foreign Minister, the environmentalist Annalena Baerbock, said very recently about the eventual European sanctioning response against Russia.