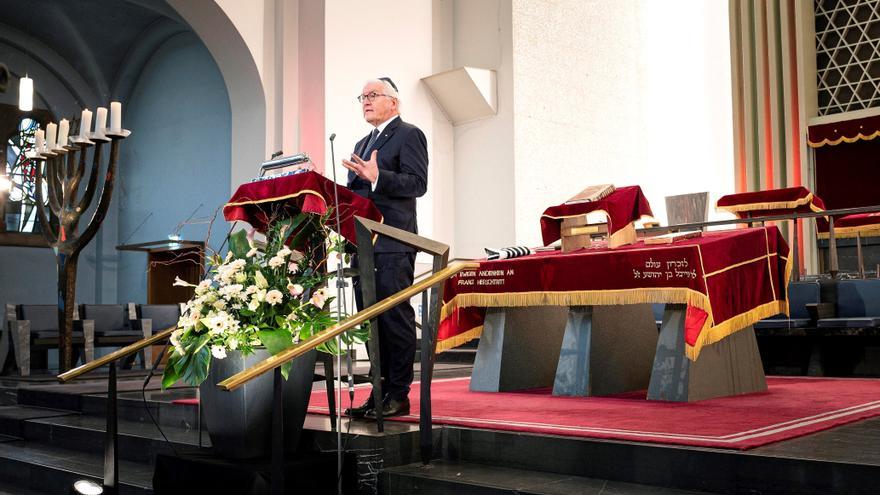 Berlin, Feb 21 (EFE) .- The German president, Frank-Walter Steinmeier, called this Sunday to combat anti-Semitism, while underlining the prominent role of Jews in their 1,700-year history in Germany that are commemorated in 2021 and whose celebration began today with a first act in virtual format.

“If as president I could ask something of myself, then it is not only a clear statement that Jews in Germany are a part of us, but that we are resolutely opposed to those who continue to question it or question it again,” Steinmeier said. .

In his speech at the synagogue in Cologne, the oldest Jewish congregation in the country, uninvited due to the imperatives of the pandemic, the president noted that “the history of the Jews in Germany is a story of emancipation and flourishing, but also of humiliation, exclusion and deprivation of rights “.

He called it “immeasurable fortune” that decades after the Holocaust, Jewish life is flourishing again thanks to returnees, immigrants from the former Soviet Union and young Israelis attracted to Germany.

Jewish life today is “varied, diverse, alive, full of momentum,” but “is still under threat” in times when anti-Semitism is “more openly displayed”, in which an attacker driven by hatred attacks. a synagogue full of people on the holy day, he said, referring to the anti-Semitic attack carried out in October 2019 by a far-right in Halle.

Israeli President Reuvén Rivlin, for his part, called in a video message for “zero tolerance” for any form of anti-Semitism.

He noted that in recent decades Germany has experienced a strong rebirth of Jewish life, but also a dangerous rise in old and new forms of anti-Semitism, which must be opposed, whether on the streets, in the online media or online. politics.

He added that the history and destiny of Germany and the Jewish people have been linked to each other for centuries, with times of “terrible persecution”, but also with phases in which this common history was characterized by “cooperation” and “tolerance”.

In his speech, Steinmeier added that looking back at these 1,700 years of “troubled common history” must be “sincere”, because “only then can lessons be learned for now and for the future”, something that he considered to be the responsibility of the Germans.

He noted that Jews have almost always been viewed as “strangers,” but the truth is that they have co-written and marked the history of Germany, whether in philosophy, literature, painting, music, science, medicine, or science. economics, “have made German culture shine” and have helped usher into the modern era.

THE EDICT OF THE EMPEROR CONSTANTINE OF 321

The 1,700-year history of Jews in Germany dates back to the first written mention of this community in a decree of Emperor Constantine in 321 addressed to the Cologne municipal council, according to which Jews could and should stand for councils municipal.

“The Jewish community in Cologne is thus not only the oldest in Germany, but beyond the north of the Alps,” said Armin Laschet, the head of government of the federated state of North Rhine-Westphalia, to which he belongs in a video message. this city, the fourth most populated in Germany, with its 1.09 million inhabitants.

The virtual event in the Cologne synagogue marks the start of the commemorative year which, organized by the association “321: 1,700 years of Jewish life in Germany” and sponsored by the German president, includes around a thousand events and projects such as concerts, exhibitions, a podcast and various musical, theatrical and audiovisual proposals.

The Ministry of Culture has allocated 1.6 million euros of its budget for this program.

In a statement, the minister of this portfolio, Monika Grütters, stressed that after the crimes of the Nazis and the Holocaust, Jewish life in Germany is “a gift and a great gesture of trust”, and also called to defend against any provocation anti-Semitic and far-right that Jewish life belongs to this country.