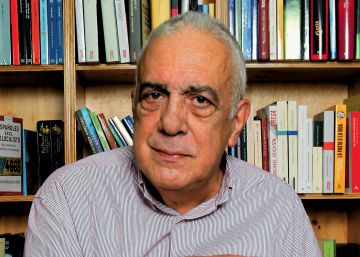 One of the essential voices of the Chilean narrative, Germán MarínHe died on Sunday, December 29 at the age of 85 at a Santiago hospital in Chile. Strong in character, like his own work, he was a narrator especially interested in the uncomfortable areas of recent history, about which he never stopped writing since 1994 – at age 60 – he published Vicious circle, the first novel of his trilogy History of a family acquittal. From the likes of firms such as José Donoso, Manuel Rojas or Carlos Droguett, the thirties of novels, stories and autobiographical texts of his authorship make up a production that has been described as risky and vigorous. With a style very influenced by the Spanish Juan Benet, whom he greatly admired, Marín was also a kind of literary awareness for dozens of Chilean writers from younger generations who made his way and who mourn his death at this time.

“He dug in the painful places of memory,” describes his friend, the poet and editor, Matías Rivas. “He was an incorrect guy, he wasn’t affiliated with fashion. He had no major complaints in expressing his opinions. He was for parody and not for swallowing ideologies from good to first. He was one of those who did not fold his head to the political institutionality of any kind, which had a high price, ”says Rivas in reference to what is considered one of the great injustices with his work: Marín never received the National Prize of literature. The Chilean poet Raúl Zurita wrote about his death: “The 1,600 pages that make up History of a family acquittal they make this novel the strongest written by a Chilean in the last century and its author, someone who deserved the highest recognition that a petty state like ours, did not give. ” Zurita declares himself ashamed of being a national prize on a list that without Marin “is spurious and clumsy.”

In the Military School he had Augusto Pinochet as an instructor and after exchanging weapons for letters, he learned from Jorge Luis Borges in Buenos Aires. He published his first novel Fireworks shortly before the 1973 coup and the complete edition was burned by the new regime. He went into exile in Mexico, where he worked in the 21st Century Publishers and began collaborating with Gabriel García Márquez in writing speeches, prologues and catalogs. Soon, however, he settled in Barcelona, ​​where he flourished as editor from Editorial Labor and Seix Barral. It was the time when Marin wrote History of a family acquittal, with which he would return to Chile under his arm at the time of the return to democracy in 1990. Because of his forcefulness, this trilogy is usually compared to The obscene bird of the night, from Donoso.

In Chile he returned to the edition in large companies, such as South American and Random House Mondadori, where “he was going to look for the books he wanted to read and did not expect them to arrive at his desk,” as described by writer Rafael Gumucio, which he pushed 20 years ago to publish Premature memories. Meanwhile, Marín published fundamental works of the Chilean narrative of the last 25 years, such as The palace of laughter, where he reconstructs the history of the detention and torture center of the Pinochet regime, Villa Grimaldi. “It is a key book to understand the dictatorship and political violence that marks the history of Chile,” explains Diego Zúñiga, a Chilean writer. “He had an obsession to inquire into recent memory, which led him to enter uncomfortable and dark areas,” adds the author of Camanchaca. His judgment is categorical: “Marín with Roberto Bolaño are the two most powerful Chilean writers in narrative terms of the last decades and, therefore, it is striking that their unique project remains a secret outside of Chile,” he concludes.

He was a young writer of the sixties installed in the nineties and 2000, analyzes Gumucio, who warns that in Marín’s extensive work there are elements that seem premonitory. “The start of Idol [una novela de culto en Chile, la más oscura de su obra] He speaks of a walk through Santiago completely destroyed. Although it was published in 2000, it portrays a city like the one we see today, in 2019, ”says the writer in reference to the State of the Chilean capital in the framework of social protests. “Many of his books talk about issues that could explain the outbreak. Many elements of desperate political violence, without much direction, are told in several Marín novels. He observed this kind of carnival a bit violent and fun at the same time, ”says Gumucio. Because he warns: “Marín was amused by disaster, he was not worried at all. Many of his characters portray this new Chile that does not believe in anything or anyone. ”

The death of this complex author who avoided both heroes and the idealizations of other eras has been lamented from all levels of Chilean culture. There is a coincidence that the year ends with a very sad outcome for literature and will begin with the indelible mark that Marin leaves in his innumerable notebooks always written by hand, his footsteps like a bear and his cavernous voice.