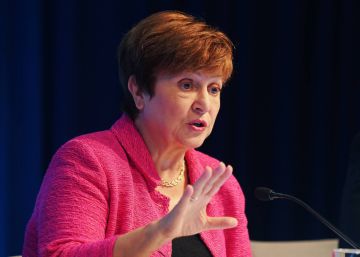 The managing director of the International Monetary Fund (IMF), Kristalina Georgieva, supports the economic policies promoted by the new Government of Pedro Sánchez, including a rise in the minimum wage of 44.5% in four years. “The Spanish economy went through difficulties during the years of the eurozone crisis and one of the impacts was the increase in inequality. It is a problem that the Executive must solve. Among the policies of the new Spanish Government, it is working towards more inclusive growth to ensure that the benefits are better shared. The question of wages must be part of the government’s agenda, ”he said Friday.

In a meeting in Washington with a dozen media, including THE COUNTRY, Georgieva recalled that the new Executive has just started and it is necessary to give him time to carry out “the policies he believes are best for the country.” He also had good words for the Minister of Economy, Nadia Calviño, who, he recalled, had been its general director of Budget in the European Commission. “She and the entire government are absolutely determined to reverse the economic slowdown,” he said. Spain is growing at a faster rate than the eurozone, but the Fund has just revised downward its growth forecast.

The objective, the managing director of the Fund insisted, is not only to strengthen the expansion, but to make it more equitable. “In that sense,” he said, “the policies promoted by the new Government are encouraging.” Included that rise in the minimum wage? “Including that, yes,” he reaffirmed.

Georgieva (Sofia, Bulgaria, 66 years old) kept the meeting on a hectic day for the world. There are few hours left before Brexit is consumed, confirming to the markets that a project like the European Union is reversible. And in Washington there are the last bars of the historic trial against the president of the United States. Political instability threatens growth, it always does, but in this case it coincides with something that the Fund has defined as “synchronized” slowdown. Trade tensions between the world’s first economy and China will mean global losses of 700 billion dollars, Pessimism for the economy reached record levels among executives of the recent Davos Forum and, in case something is missing, the unstoppable expansion of Wuham’s coronavirus has already reached the international alert level.

The managing director noted something of concern about 2020: “We have not even finished the month of January and Australia has already suffered significant risks in its growth from fires, we have lived a week of uncertainty about tensions in the Middle East and now we have the coronavirus” This disease “is hitting the Chinese economy, but it also represents a global risk for growth,” he added. The Fund does not yet have an estimate of its impact on the economy: “There will be a slowdown in the short term, but in the long term we do not know, we must assess how fast and effective the measures are taken.” With the SARS epidemic, in 2003, he recalled, at the end of the year global growth was only reduced by 0.1%. But now, he warned, the weight of the Chinese economy in the world (held by purchasing parity) reaches 18%, compared to 4% at the time.

Georgieva landed as head of the Fund last September and he found an institution different from the one inherited by his predecessor, Christine Lagarde, in 2011. The creed of extreme austerity for countries with severe fiscal crises has been modulated, due to failures, and the predominant message defends social spending as a way to curb social unrest and ensure a more balanced distribution of growth and wealth.

This is the general discourse, but each country then requires its footnotes. Spain has just been diagnosed with problems in the effectiveness of its social spending. A report published on Thursday warned that the benefits are focused on pensioners and middle classes, while not enough in low income and youth. Georgieva also referred to this. He warned that the Spanish economy is in “a difficult fiscal situation.” “And it must continue with the consolidation for the good of the country,” he added. What matters, he said, is “the quality of social spending.” He highlighted the problems of youth employment, the need for more equitable growth and warned that the measures to achieve it “will not be easy because of the need for fiscal consolidation.”

“The coronavirus hits the Chinese economy and poses a global risk”

Georgieva warned about the greatest risks of the prolonged period of low interest rates. He supported central banks to maintain their lax policy in 2020, but said that, in the search for profitability, institutions assume more risks and dangers grow. In addition, the effectiveness of these measures seems to have reached a ceiling in several economies, with no room to go further.

In his opinion, some countries are already in a negative zone and should not continue to lower interest rates further. Others, like the US, have a certain margin, but the point, he stressed, is that “monetary policy cannot be the only measure to rely on.” He insisted on the need for fiscal measures, with more or better spending depending on each country, and above all, structural reforms.

The world economy will grow 3.3% this year and 3.4% in 2021. This represents a cut of one and two tenths compared to what it calculated three months ago. Some emerging economies, such as India, have slowed and the US slows down.

The risk of a messy Brexit has dropped substantially, according to Georgieva. But assures the British economy will suffer an impact of three percentage points throughout the decade. “We must accept that Brexit has not been favorable for the European Union and less for the United Kingdom,” he said. But the damages will be contained “if it concludes in an orderly manner and the parties achieve constructive business relations.”