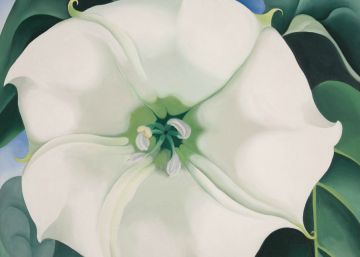 "Of all the notable people I have ever met, the first I should mention is Georgia O'Keeffe," he writes. Yayoi Kusama in recognition of the North American painter, who was her first and greatest benefactor in her origins. The artist wrote a "clumsy and reckless letter" to O'Keeffe in 1955, asking for refuge. "It was thanks to her that I was able to go to the United States and start my artistic career seriously," says Kusama, who was unable to find her place in New York. "It was nowhere near Matsumoto-like after the war, and the ferocity of the place was such that I was frequently immersed in episodes of neurosis," says Kusama. At that time, O'Keeffe writes to invite him to his New Mexico home. They were not yet known, but attached photos of the house and the garden. "Maybe he saw something in the works I sent him," Kusama admits with surprise. However, Kusama rejected the invitation because he wanted to become "a star" and could only do so in New York. When they later met the first thing that caught his attention was the wrinkles on his face: “I've never seen so many. They were about an inch deep and reminded me of the soles of canvas shoes. But she was a lady who exuded refinement, "he recalls.

The Japanese artist is struck by the fact that O'Keeffe could live so far from the center where everything happened and still maintain her fame and status. "It is proof of the greatness of his art and how deeply it affected people." Georgia O’Keeffe found in that nature the absolute void. Abstraction that does not seem abstract; the meditated nature. "When I think about death, I just feel like I will never be able to see this beautiful landscape anymore," he wrote long before he died in the midst of those reddish lands of his Ghost Ranch, in Abiquiú (New Mexico), where he moved permanently. in 1946, after the death of her husband, the photographer Alfred Stieglitz. There she took refuge and discovered the true color of nature (and that she could work enough for two days without being disturbed by anyone) and it was there that she finished building one of the most unique and sophisticated proposals of the 20th century. And most importantly: she developed her landscapes of feminine emergence embedded in the grandeur of the North American horizon. "I work on an idea for a long time. It's like getting intimate with a person, and I don't get intimate easily," he said of his painting cleaning processes.

Since 2014 she is the most expensive artist in the history of the art market, when the Crystal Bridges Museum in Arkansas bought the canvas. Jimson Weed / White Flower No 1 (1932) for $ 44.4 million. Somehow, O’Keeffe culminates in the history of painting a liberating trajectory that he had inaugurated Hilma af Klint three decades before the American one. It is the last link in the North American landscape tradition, but above all a benchmark of abstraction that allowed women artists to invent their own language to express themselves - without waiting for permission from the patriarchal system -, in a way that until then was inconceivable. O’Keeffe clothed herself with the new freedom to translate the feminine sense into the visual story and create her own language as subtle as it was resounding; as nuanced in the colors, as robust in the forms. And each time she tried to make her works more objective, concrete and real, so that they defended themselves, as she herself pointed out: "The colors, lines and shapes seem to me a more definitive statement than the words."