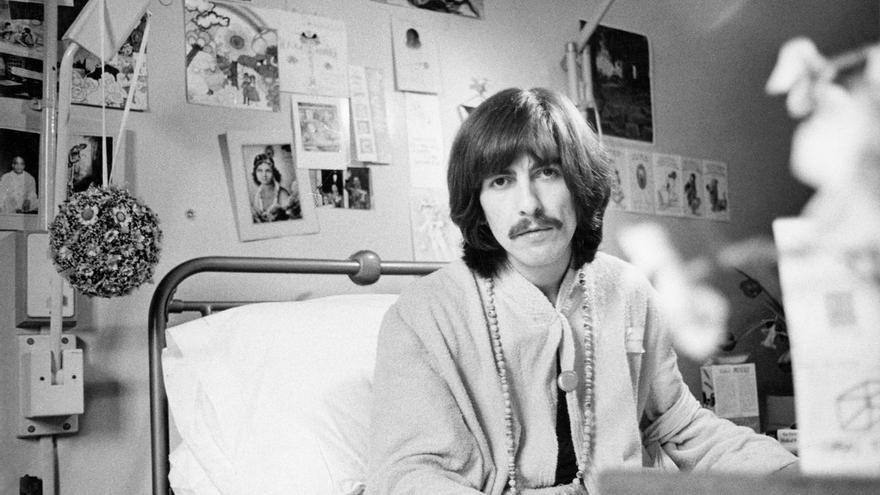 Harrison regained the title ‘I Me Mine’ after a decade to name a very special book in which he collected excerpts from a long conversation with his friend Derek Taylor, journalist and publicist who had worked as a press officer for the Liverpool quartet, as well as the lyrics of many of his songs commented on by himselfI hear an extensive selection of images that ran throughout his life until then. The volume was at the time of publication, and still is today, the closest thing to an autobiographical work by any of the Fab Four (Ringo Starr’s photo books follow at a certain distance).

The original artifact was put on sale in 1980 in an exclusive limited edition, numbered and signed by the author. at 335 pounds the specimen. There were later editions at much less dissuasive prices, but in all of them a good part of the color graphic material disappeared, which has now been recovered in a stunning 640 page remake which has published Libros Del Kultrum in Spanish, with a translation of the texts by Eduardo Hojman.

In an interview with Playboy magazine in September 1980, John Lennon was “pained” to see that his name barely had relevance in Harrison’s book. “I consider it a flagrant omission,” he pointed out. My presence in his life is conspicuous by its absence ”. Paul McCartney, who appears even less, declined to comment. It seems that Lennon did not quite understand the nature of ‘I Me Mine’, that it should not be considered so much a volume of memoirs to use (it is not at all) as a collection of memories and reflections in which the author’s passage through the most influential pop group in history has no more weight than his passion for gardening (the book is dedicated “to all the gardeners of the world”), the music of sitar or auto racingThese things were capable of turning the ‘quiet beatle’ into the most talkative of men.

Even so, it is fascinating (and very revealing) to read the paragraphs in which George Harrison talks about his years in the Beatles with the jaded and dismissive tone of someone who gives an account of a youthful mistake. There is not a trace of nostalgia in his words. Beatlemania. For nothing in the world would I want to experience something like this again. […] It’s like ‘Somebody flew over the cuckoo’s nest’, you know, you’re sane in a place where everyone else is nuts”. It is not the only brutal simile that he uses to define life in the group. “We were doomed because we had no [espacio]. It’s the same thing that happens to monkeys at the zoo. They die”. And at another time he writes: “None of the ‘beatle’ experiences were that good; I ended up getting tired even of extreme emotions. No one actually laughs twice at the same joke, unless you get really stupid. ”

All of these judgments by Harrison about his famous band can be daunting to Beatles fans, who may find little comfort in a strangely sentimental passage in which the author of ‘Here comes the sun’ admits that he is one of the Fab Four also had his good points: “If one of us didn’t have them all with him, the others covered him. We protected each other […]. Sometimes i miss them. We were very fond of each other ”.

They are the four most affectionate phrases that George dedicates in the book to his former colleagues, to whom, on the other hand, he does not reproach them with any consideration. Probably, the intervening years had helped to temper the burden of resentment that Harrison accumulated in the late Beatles period, in which he felt personally ignored by Lennon (feeling that grew exponentially with the appearance on stage of Yoko Ono) and artistically bossed around by McCartney. As is well known, his forceful response to the vortex of bad vibes that the end of the group became was the creative explosion of ‘All things must pass’ (dazzling triple solo album that has just celebrated its 50th anniversary with an imposing reissue) and the consolidation of a spiritual journey that had begun in an encounter with the ‘swami’ Vishnu Devananda during the filming of ‘Help!’, in 1965.

But Harrison owned a complex personality That Nietzsche aphorism made good that says that one is productive only at the cost of being rich in contradictions. The apostle of the inner light and the cosmic reverberation who was ecstatic contemplating the gardens of his Gothic mansion in Friar Park could go from deep meditation to cocaine addiction without ruffling his hair. Behind that peaceful, mystical and somewhat inscrutable image was hidden a joking, partying and noisy Mister Hyde who he enjoyed in the company of the Monty Python and the best Formula 1 drivers of his time.

Aware of how paradoxical this range of interests could be, he himself tried to give in ‘I Me Mine’ some explanation that would reconcile his passions, although he did so using arguments that were not entirely convincing. “For many people, racing is something absurd from a spiritual point of view,” he says. Motor cars pollute, kill, maim and make noise. However, being a good runner implies reaching a higher perception. And those who shine among the best have experienced some degree of expansion of consciousness. ”

Beyond his weaknesses and contradictions, Harrison is revealed in the book as a lucid, passionate and generous person. It continued to be so until his untimely death on November 29, 2001, at age 58. He was never a proud man, and perhaps there is no more glaring proof of his proverbial humility than the comment he dedicates in the book to the marvelous ‘Something’, the second most covered song in the entire Beatles catalog, behind only ‘Yesterday’: “It probably has a five-note range that fits very well with most singers. I guess it is my best known song, since more than 150 versions were made. My favorite is James Brown’s, which is excellent. ” It is difficult to give yourself less name after having created something so exalted.