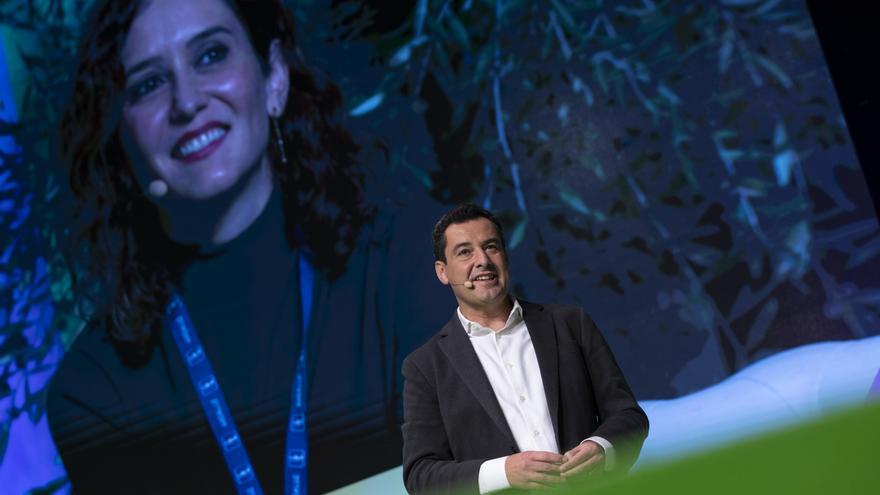 Every journalistic leak has a goal. And if the objective of the audio published on Tuesday, and that questioned the true negotiating intentions of the president of the Junta de Andalucía, Juan Manuel Moreno, was to push him to advance the elections and kill To its vice president and Citizen leader, Juan Marín, it can be said that the operation has been a fiasco. At least for now. The leader of the Andalusian PP has received the approval of the state leadership, in public and in private, to call the polls whenever he wants. A permission that he didn’t really need. Not just because the authority is yours, and yours alone. But because it has been a long time since the Andalusian leader had made it clear what he was thinking of doing, despite the pressure from Pablo Casado’s management to summon the Andalusians to the polls after the return of last summer, to try to cover the success scored by Isabel Díaz Ayuso when we have the information. A pressure that had increased in recent days on account of Marín’s leaked statements.

But a new irruption of Ayuso to become a protagonist where I was a guest it has forced the national leadership to verbalize that Moreno “is free” to make and break in its territory. The first thing the Andalusian leader did was to shield Marín in his position, and with him the alliance with Ciudadanos. The second, to launch a message on which there is little room for interpretation: “Let’s get rid of sterile entanglements that interest no one “.

“You are and have always been a free person,” the Secretary General, Teodoro García Egea, told him this Saturday on the second day of the XVI Autonomous Congress, which has reelected Moreno for a third term at the head of the party. Genoa landed in Granada with a delegation with a lot of internal message to answer Ayuso. To the number two de Casado was accompanied by the general secretary of the PP in Madrid, Ana Camins, one of the main pieces of the national leadership on the Madrid board, where a fierce battle is being fought and no one hides its similarities with what happened between Mariano Rajoy and Esperanza Aguirre in 2008.

“They want to alter things,” sources from the national leadership assure elDiario.es in reference to Ayuso and his family, “a PP that represents few people,” add the same sources, who settle: “Married is calm, the course it is going to be maintained. ” Two ideas that fly over the national headquarters of the PP in Genoa since the war broke out with Ayuso, who has received from the first moment the support from Aguirre and Cayetana Álvarez de Toledo.

Along with Camins also came Ángel Carromero, a former ex-boyfriend from Aguirre who now works for the mayor of the capital and counterweight to Ayuso, José Luis Martínez Almeida. And there was a third name, this time as a delegate for Seville: Fran Hervías, former secretary of the Albert Rivera Citizens Organization, today a PP worker with an office in Genoa and a declared enemy of his old party, whom he wants to engulf for his new boss.

All eyes turned to him when Cadena Ser published the audio last Tuesday in which Juan Marín said, in a closed-door meeting, that “it would be stupid to present a Budget in an election year“. The vice president had no doubts that his former partner was behind the leak, which meant pointing to Genoa, where he works now. But Hervías, and his bosses, have denied any relationship with the audio.” I have not been “, he was eager to tell anyone who asked him the same thing, he has assured in private when they have asked him about it at the national address, according to sources consulted by elDiario.es.

Nobody wants to be responsible for a leak that has been bad, very bad, in the Andalusian PP, and that has diverted the focus from Moreno’s rise. And the diversionary maneuvers have already begun. “Who benefits from the leak?”, They cleared party leaders in different conversations during the weekend. “To the PSOE”, they added immediately. Marín’s words have served as an excuse, they say from the Andalusian Executive, so that the Socialists have risen from the negotiating table of the 2022 Budgets. Some accounts that Moreno already saw difficult to carry out, after three years approved with the support of the extreme right, and that are now considered impossible after the amendments to the totality presented by all opposition groups, in addition to Vox.

This Sunday the Andalusian congress will be closed by the party leader, Pablo Casado. But first he wanted to put out the fire his number two, Teodoro García Egea, who also took the opportunity to respond to Ayuso. “Juanma, you are and have always been a free person. You have put Andalusia above the PP. That is why we do not have to come from outside anyone to tell you what you have or not to do. You are free and you have always put Andalusia above even of the PP “.

That “we do not have to come from outside anyone to tell you what you have or not to do” had a direct recipient in the Madrid president, who on Friday said to Moreno: “I want to recommend that you fly free, that you make your own decisions” and that “only those who behave like a puppet, who are not brave and who do not have clear ideas without a fixed course wear out.” All read from his files, so that no one has any doubt that he says what he wants to say, that it is not a slip.

The host also wanted to be clear. Before being reelected for a third term, he spoke at his congress and showed his weariness with an internal war within the limits of the m50. It is not the first time that the barons of the PP have demanded that Casado and Ayuso stop fighting. At the beginning of the month they claimed both “good sense and intelligence”. But it does not appear that the message has reached its destination.

Moreno took advantage of his long speech this Saturday as the (only) candidate to lead the Andalusian PP to hit the table. To cry out for a definitive solution to a war that threatens to drag on for months. “The PP has achieved very important successes. And it has always achieved them when it has been united” and not when it has “been distracted in internal matters that neither the citizens understand nor care about.” “When we have pushed all together the PP has come very far,” he said. And he continued: “Let’s get rid of sterile entanglements that do not interest anyone. Let’s focus on what is important: the Andalusians and change the terrible government of Pedro Sánchez in Spain. That is the goal. Only that is the goal. Alone. Alone!”

Moreno settled, like someone who rivets a nail that can no longer enter the wood: “That is the path. The path of unity, unity, unity.” It remains to be seen that the crystal clear message of the leader of the party that contributes the most to the PP, a detail that he also pointed out in his speech, reaches the recipients. And recipients.