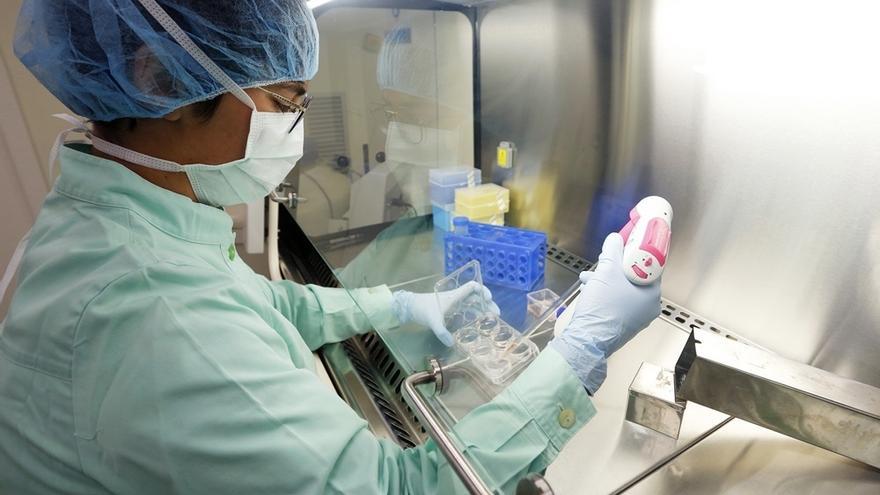 The CRISPR gene editing tools they have forever changed the way we do experiments in biology, biomedicine, and biotechnology. They derive from a defense system used by bacteria to defend themselves against the viruses that stalk them, a strategy discovered by the Spanish microbiologist at the University of Alicante Francis Mojica in 2003. Ten years later it was shown that they were useful for editing any gene of any organism and applications began to emerge everywhere. The specific inactivation of genes, the correction of mutations or the substitution of genes could already be carried out thanks to the ability of CRISPR tools to specifically cut DNA, in the gene we want to modify. Hence they are frequently presented as genetic scissors. Programmable scissors, which we can direct at will to the gene to be edited thanks to the combination of proteins, which we call Cas, with RNA guides that tell the Cas protein where to cut, taking advantage of the complementary nature of its sequences with DNA that needs to be modified.

The versatility of the CRISPR is unmatched. And their field of action is virtually infinite, as tools that interact with the genetic material of any living being … or of any virus. Early march we knew a proposal from Feng Zhang, from the BROAD-MI Institute, to use a CRISPR variant, called Cas13a, as a system to diagnose the presence of the SARS-CoV-2 coronavirus, causing the COVID-19 pandemic. To that strategy, which they baptized with the acronym SHERLOCK, others based on new CRISPR variants followed, such as Cas12a, with equally suggestive names: DETECTR, CARMEN, CONAN … showing that CRISPRs were also used to diagnose COVID-19.

Could we also use CRISPR to attack the coronavirus? This was a question that a group of researchers asked ourselves, that we had never worked together, but that we tried, like many other colleagues in this profession, to take advantage of what each of us knew to propose new ideas that could solve or alleviate the greatest crisis. health system that humanity has faced in over a hundred years, since the pandemic caused by a flu virus in 1918.

Most bacteria have CRISPR systems of their own. Some are very different, with unique properties. In 2018, a CRISPR variant capable of specifically cutting RNA molecules was described, unlike most of the known CRISPR tools, which cut DNA. RNA is an intermediate genetic material, which most of us living beings use to transfer the information contained in DNA, in genes, and convert it into proteins, which are ultimately used by cells to perform multiple functions. In general we say that DNA is transcribed into RNA and this is translated into proteins. However, there are viruses that skip the first step, and only use RNA as genetic material, such as the influenza virus. And like all coronaviruses, like the SARS-CoV-2 that we are currently concerned about.

If there is a CRISPR variant, called Cas13d, capable of cutting RNA molecules, and if the genetic material of the coronavirus that causes COVID-19 is also RNA, then the scientific project was already enunciated, and we got down to work. We are going to try to bring this new CRISPR tool to the cells that are infected by the coronavirus so that they cut their genome, thus inactivating the replication of the virus. It is a direct strategy, aimed at attacking the heart of SARS-CoV-2, its genetic material.

Our scientific project is funded by the CSIC Global Health Platform, an initiative that has raised more than 12 million euros from companies, institutions and private citizens, in an extraordinary exercise of private patronage that was not usual in our country and that we all hope will not be circumstantial and become a regular activity to finance science, fiscally rewarded for donors. These funds have served to finance around 50 research projects on COVID-19. Our project is multidisciplinary and combines the experience of various researchers. Dolores Rodríguez, a renowned virology expert, and myself participated in the National Center for Biotechnology (CNB), contributing our experience in CRISPR tools. Ascribed to my laboratory, but belonging to the Center for Biomedical Research in Rare Diseases (CIBERER), of the Carlos III Health Institute, Almudena Fernández, also an expert in CRISPR, participates. And, finally, the laboratory of Miguel Ángel Moreno Mateos, of the Andalusian Center for Development Biology, of the Pablo de Olavide University and the CSIC, in Seville, is also involved, an expert in these new CRISPR variants such as Cas12 and Cas13.

Our project plans to design CRISPR Cas13d tools that, thanks to specific RNA guides, locate and destroy the RNA genetic material of the SARS-CoV-2 coronavirus. The non-toxicity and functionality of the CRISPR reagents used will be validated in zebrafish embryos at the CABD in Seville. Later we will initiate a series of experiments on cells in culture in the CNB using, to begin with, other viruses that also use RNA as genetic material, but which are much less dangerous than SARS-CoV-2. Finally, if all the previous experiments have given the expected results, we will apply everything we have learned to directly attack the SARS-CoV-2 coronavirus in cells in culture, using the required level 3 biosafety laboratory that we have at the CNB. . If we are able to demonstrate that this strategy is valid in cell cultures, and we manage to make the coronavirus disappear or decrease its presence significantly, then we would consider the following steps, in preclinical trials, using animal models, and, finally, we could evaluate this strategy in clinical trials, with people. To face the challenges of these last phases, we have expanded the consortium with researchers such as Pablo del Pino (University of Santiago de Compostela), an expert in nanotechnology, and Manuel Collado (Galician Health Service), an expert in cellular biology, with whom we have requested new projects. which we hope will also be financed.

It is strange to be writing an article about a scientific project that we are developing at the moment, when it is usual to comment on it at the end, once the results have been obtained and published. However, the COVID-19 pandemic has changed everything and, in an exercise in exceptional transparency, the researchers are broadcasting our projects live as if they were football matches. And this also has its positive side, its educational component for society, which shows that scientific experiments are not always successful. They often fail, forcing scientists to search for alternative paths. And this is absolutely normal. This is how science advances. It is, in short, what we call the scientific method, which now occupies the front pages of the media.

We are dedicated to covering the coronavirus epidemic and its consequences. If you like our work, support us. Our independence is possible thanks to the commitment of more than 55,000 members who pay for us to be free. Become a partner, become a partner.