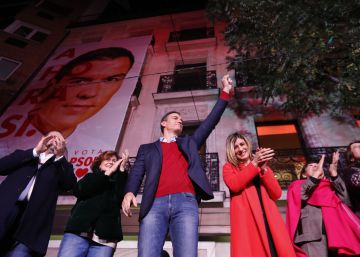 After the result of the elections (and the possibility of a new round) I was invaded by the feeling that in Spain what we are doing is "throwing the dice", the title of the famous poem of Charles Bukowski. However, there is not the patio to resort to cursed writers although it is suggestive that "if you are going to try, go to the end, otherwise do not even start."

We do not know what that end is going to be and the economy should not be a game of chance but, rather, a necessity. After each reissue of vote there is a more demonized imbalance. He increase It is losing cyclic inertia, without structural motors that guide it in the long term.

Something similar they must have felt Monday in the Stock Exchange, where the tone was between negative and flat. The erratic dynamics of the indexes seems to be here to stay. The financial interpretation of 10-N is that it will be very difficult to set a course.

Putting proposals on the table to overcome the red line of the veto would be more convenient for the economy, but that space of possible intersection and understanding has been reduced after these elections. And it tends to be reduced with each new call.

Weighs the fear of the potential punishment that an alliance may imply in the intention of voting, rather than practicality. To what extent the average voter values ​​a coalition in basic economic aspects remains an unknown element that invites the political economy. Perhaps the first one who surprises holding out his hand (with his conditions, it was not going to be less) can earn double revenue from the economic and social responsibility and the understanding of the voter, even if it comes later. That the markets did not react negatively to a greater extent because they already discounted a political scenario without majorities or clear coalitions.

Many sectors subject to some volatility in their market value require a government with a more or less defined policy, to adjust their expectations and get out of the rumor limbo. The definition of issues such as the tax strategy, the innovation model or the modifications that can be made in labor matters is expected. Waiting are energy, construction and banking, among others.

The central scenario is that everything remains the same. But the dice are capricious and, if there is no political reaction, in another round they can give an even worse result. One in which there is no space to integrate policies that on other occasions have shown that there is convergence in some aspects. Not in all necessary nor to the extent that would be desirable, but to move this country towards a more responsible and stable terrain of institutional and economic conditions.

What is observed in each roll of the dice is more polarization, a sign of despair and tiredness. We may be facing a moment of historical responsibility or the continuation of a dangerous and damaging economic and social deterioration.