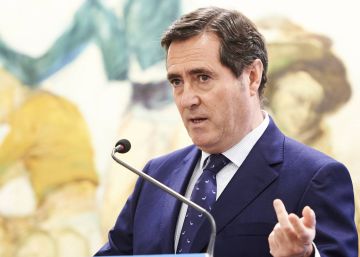 The Department of Economics of the CEOE has published this Wednesday a special report on the impact of the Covid-19 crisis in companies and in the economy in general, from which it follows that its consequences will be greater than those initially foreseen. Spain will return to recession in 2020 due to the slowdown in activity and demand from the second half of March and its extension to April, with “an estimated drop in GDP of 5% for the year as a whole (with different effects by sectors), within the most intense recovery scenario, in which the end of the confinement is estimated for the first days of May, a high effectiveness in the measures adopted and a rapid recovery in most of the sectors. “

In this scenario, 445,300 employed will be lost in terms of EPA, 2.3% less on an annual average, and the unemployment rate will grow from 14.1% to 16.5%, with an increase in unemployment of 560,400 people, up to stand at 3.8 million. In any case, the exceptional nature of the situation makes it difficult to predict central scenarios since the evolution of the health crisis itself or the degree of effectiveness of the measures adopted by the Government so far, among other factors, is still unknown. In the most adverse of these scenarios, with more prolonged confinement and less effectiveness of the measures adopted, the fall in GDP “could be around 9%”, indicates the employers. In this case, employment would fall by 4% on an annual average, with a decrease in employment of 796,800 people, and unemployment would rise by 912,000 people, to almost 4.2 million, with an unemployment rate of 18%.

All in all, taking into account that the economy is facing an “impact shock” this time, activity levels could reach those in December at the end of 2019, so “the recovery in a scenario like the current one should be faster than when we witnessed a cycle end like the last recession. ” In this sense, in the most optimistic scenario, it is estimated that GDP would experience a notable rebound of 5.2% next year.

The effect of ERTE

“The most dramatic side of the fall in GDP due to the Covid-19 effect is, without a doubt, its impact on companies and employment levels,” says the report, which stops to make an estimate of what the behavior of employment without the possibility of availing the ERTE in the current conditions.

Escalation of the deficit and public debt

In the case of the estimates on the impact of the Covid-19 on the deficit and on the public debt, the difficulty in making calculations is greater when dealing with ratios dependent on multiple variables. On the expense side, an increase in public spending derived from the benefits associated with ERTES and benefits for cessation of self-employment is taken into account. It is also estimated a cost of between 5,000 and 6,000 million derived from spending measures in the health field and to provide coverage to vulnerable groups.

To this should be added the spending associated with the rise in unemployment and among other 5,000 and 6,000 million more due to the salary increase of officials and the revaluation of pensions. Thus, the increase in public spending needs could be between 25,000 and 30,000 million euros, without taking into account the measures that may still be announced. Income estimation is more difficult, although they will probably suffer a significant impact from the drop in consumption.

In this sense, the collection will fall mainly on VAT. A prudent estimate would mean a reduction in the collection of this tax for the year as a whole of between 10% and 20% – from 7,000 million to 14,000 million -, depending on how long it takes for consumption to recover after confinement. The reduction of hydrocarbon consumption due to mobility restrictions will also mean a decrease of between 20% and 30%, depending on the recovery schedule for mobility and consumption, which will detract between 4,000 and 6,000 million euros.

Regarding direct taxes, personal income tax “will be affected by the increase in unemployment and the loss of self-employed turnover, but its effects will be divided between 2020 – this year the 2019 Income Statement is presented, but less withholdings will be recorded on account — and 2021 —year in which the settlement corresponding to 2020 is presented. ” In this case, it is estimated that the figure will be less than that corresponding to VAT, with a possible fall of between 5% and 10%, between 4,000 and 8,000 million euros. In Corporate Tax, the settlement schedule introduces the same difficulties for calculation. However, the payment on account in April for companies that invoice more than six million euros, depending on the scenarios being considered, could be reduced by between 1,000 and 2,000 million.

In the chapter on Social Security contributions, the impact will be “fairly immediate” due to the increase in unemployment, the loss of self-employed workers and the effect of ERTEs. Adding up all these estimates, the total loss of collection could be between 8% and 15% depending on the depth of the drop in activity and the speed of its subsequent rebound.

The result of these deviations shows a public deficit of between 80,000 and 120,000 million euros, in a range of 7.5% and 11% of GDP, depending on the behavior of the activity. At the same time, public debt would amount to 108% or 115% of GDP. However, it should be borne in mind that we are facing an impact shock, which causes a one-off effect on the accounts, largely non-cumulative, so most of its influence on public finances should be diluted. as normality recovers, without affecting the structural deficit.

Based on the scenario outlined, from CEOE it is stated that in the current supply crisis, part of the solution should be the implementation of measures that are aimed at facilitating the adaptation of companies, granting more flexibility, supporting liquidity and enabling the tax moratorium, similar to what the rest of the countries around us are doing. At the same time, it is essential that companies are prepared for a scenario where the crisis will continue in time beyond what is expected.

The Spanish economy needs resources with a certain speed so that health care is compatible with the normalization of economic activity. Companies will act as exit levers from the current situation. They must comply with protocols to safeguard health in the workplace, but they should be allowed to produce what they consider society to be demanding, under the market umbrella, as it is the best incentive for them to transform and adapt to new needs.

The sponsor concludes that it should “safeguard the competitiveness of our companies” so that exports are also “a lever for recovery, as happened in the 2008 crisis.”