Grant the patrimonial dignity that corresponded to the most emblematic castle of the kingdom Asturias. With this objective in mind, in 2007 the Castrillon Town Hall the archaeological intervention project in the castle of Gauzón del Peñon de Raíces. The thirteen excavation and restoration campaigns that have been undertaken since then have made it possible to discover not only the floor plan of the castle, offering a plan of the fortification that was totally unknown, but also to rewrite history. Archaeological investigations have overturned the chronologies that were traditionally considered for the castle from the information contained in written sources. These are the fruits of the last fourteen years of research in Gauzón, according to the conclusions of the interdisciplinary team hired to develop the archaeological project led by Alejandro García Álvarez-Busto.

The successive campaigns have made it possible to identify the morphology and functionality of the different excavated rooms, which offer a “plan” of the fortification that was totally unknown and that is detailed in the graph that accompanies these lines. This further implies that it has been possible to verify what a royal fortification was like from the time of the Asturian monarchy and that collides with the image of simplicity that was had of this type of high medieval castles. 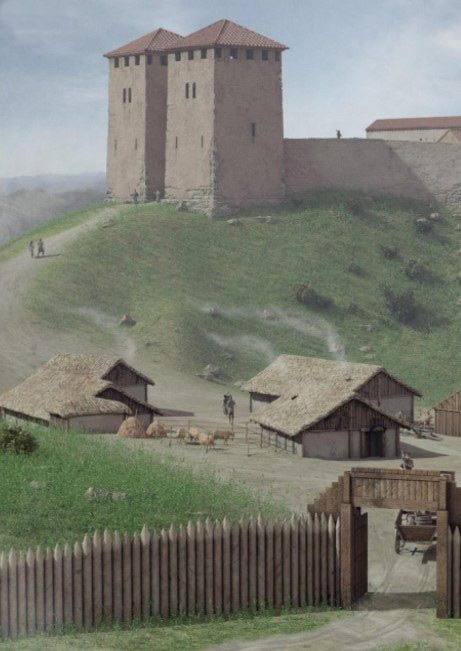 The Gauzón fortification is a fortification that combines different social spaces (military, courtly-religious, servile spheres), and a variety of functions on a larger scale, among which was the defense of the coast of the Kingdom against Viking attacks – confirmed at least in 844 and 858– or the administration of a large regional territory full of villages and known at the time as the “Mandatione Gauzone”.

Research in the Rock of Raíces They have changed the image of those Asturian medieval castles and the chronologies that were traditionally considered for Gauzón’s. Archeology has revolutionized what was deduced from written documentation.

“Gauzón was linked exclusively to the figure of Alfonso III (the last Asturian king between 866-910, before the transfer of the court to León) according to the data provided by medieval Chronicles such as that of Sampiro (11th century) or the Silense History ( XII century). In this way, the archaeological stratigraphy documented in the site, the materials recovered in these strata (ceramics, metals, glass, etc.), and the carbon 14 dating carried out, have made it possible to establish a complex and extensive periodization of the different moments of construction. and occupation of the castle organized in four main phases”, explains Alejandro García. These are those four phases.

Settlement prior to the Battle of Covadonga

One of the main findings has been the documentation of a fortification on the Peñón de Raíces prior to the time of the kingdom of Asturias. Specifically, it would be a first occupation dated between the end of the 6th century and the 7th century. Gauzón thus becomes a key site for discovering, understanding and explaining the process of formation of the kingdom of Asturias, providing a renewal of traditional historiography and a new vision of the origins of the Asturian kings, by verifying the existence of an outstanding aristocracy in the Asturian lot long before the battle of Covadonga.

The occupation of the castle

Gauzon was occupied throughout the time of the kingdom of Asturias, and not only during the reign of Alfonso III, as was believed. What is related to the last and most powerful monarchs of the kingdom is the configuration on the site of a small court, with a previous castle that was monumentalized at the end of the 9th century by the construction of two large towers at the entrance, and a palace and a church inside.

Between the 11th and 12th centuries, the kings handed over the usufruct of the fortress to the Asturian count families. In this period, specifically between the years 1132 and 1137, the rebellion in Gauzón of Count Gonzalo Peláez takes place against King Alfonso VII, who will send his army to besiege and assault the Asturian castle and retake it under his control. The largest volume of weapons recovered in the excavations belongs to this period, especially crossbow dart points, the main weapon of the soldiery.

In 1222, King Alfonso IX handed over the castle to the Order of Santiago, and a local nobility took up residence in the fortress, whose consumption habits we know from material findings. Finally, in 1335 Gauzón was entrusted to Enrique de Trastámara, and in the middle of the 14th century it reached its final point as a military fortification, when the two towers at the entrance were deliberately demolished in the context of the civil war between Pedro I and Enrique de Trastamara

Great finds in an excavated area of ​​14%

The first vestiges were located between 2008 and 2009, and in 2019 the workshop in which the Victoria Cross was carved

The Rock of Raíces is divided into two main spaces, an upper platform, where the largest buildings are located, and a lower platform at the foot that drops down towards the Raíces River. Some 2,000 square meters of the 14,000 square meters occupied by the archaeological site have been excavated, only 14%. This is the chronology of the intervention project so far.

A first campaign of drillings and punctual trenches was carried out, which allowed verifying the existence of archaeological remains both on the upper and lower platforms. Already between 1972 and 1977 Vicente José González García had identified and excavated some rooms and archaeological structures in the upper area of ​​the castle.

The first vestiges corresponding to the entrance to the walled enclosure are located, which was defended by a monumental entrance protected by two large towers. At the same time, an intramural space is excavated that is identified as the castle palace, the rooms used by the royal family and the counts, and which was made up of two main rooms: a large 44-square-meter aristocratic representation room and next to it a bathroom of 13 dedicated to leisure and hygiene. The researchers see it very likely that the Infante García was locked up in this palace after his failed rebellion against his father Alfonso III at the beginning of the 10th century.

In that two-year period, the lower platform of the castle was excavated, finding the remains (post holes, floors, bonfires) of a wooden cabin as well as numerous occupation debris linked to the town located at the foot of the fortification.

During the excavation of the castle church cemetery, two skeletons were found that are in the process of being investigated and on which isotopic analyzes are now being carried out. According to the medieval Chronicles, the church of San Salvador de Gauzón was consecrated by three bishops at the end of the 9th century and was decorated with precious marble.

The workshop where the Victoria Cross was made, in 2014

That year the poly-metallurgical space located next to the aristocratic dependencies was located and excavated. The material findings located in this area, as well as the carbon 14 dating carried out, allow us to identify, right in this space, the artisan workshop in which the Victoria Cross was made in the year 908, as stated in the inscription that runs through the back of the Cross itself. “Without a doubt, that the public can know the exact place where the Victoria Cross was made, the main emblem of the Principality of Asturias, is one of the great attractions offered by a visit to the archaeological site”, underlines Alejandro García.

It was during this campaign that the fortress cistern was found and excavated, a well one meter in diameter and 2.20 meters deep lined with stone and mortar, located inside the military compound, and which allowed the storage of 1,700 liters of rain water. The bottom of the well was filled with a sediment in which seeds, pollen and spores could be recovered, allowing us to discover what the vegetation was like in medieval times.

Since 2016, the excavation of the monumental entrance to the upper walled enclosure has been completed, completing the comprehensive excavation of the floor plan of the two towers that defended the access. In the collapse between these two towers, a capital of pre-Romanesque typology was recovered, linked to the style of Alfonso III. In recent years, the interior military enclosure of the castle, the space occupied by the soldiers of the garrison, has also been excavated, identifying different structures in this area (wells, basins, low walls, the western bastion…).

In 2011, restoration work began on the archaeological structures, which have undergone a final intervention in the autumn-winter campaign of 2021 with the restoration of the towers and the refurbishment of the entrance by installing a wooden staircase that will serve to recover visits to the castle. In the Peñón de Raíces there is still a lot of history to be written.