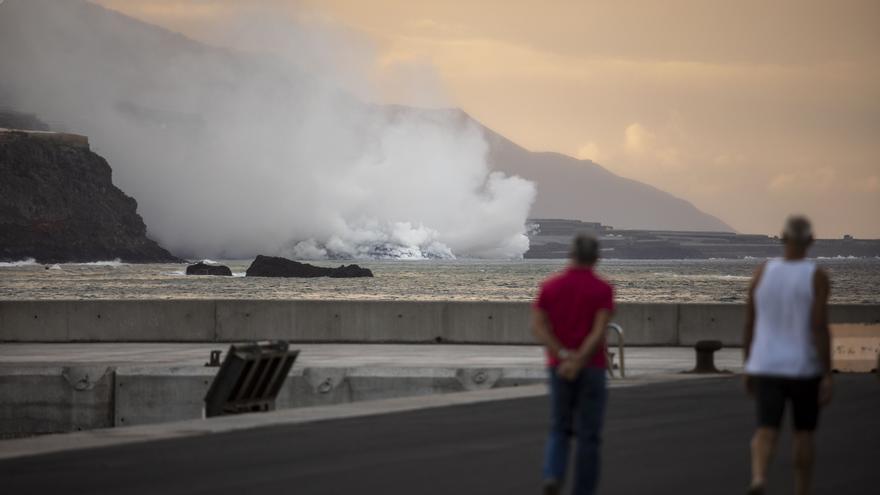 Last night the lava flow made its breakthrough in the sea causing an immediate chemical reaction. After falling down a cliff of about 100 meters, the volcanic material at a temperature between 900 and 1,000 ºC came into contact with the water that was at 20 ºC.

“The reaction that occurs is a evaporation strong because the temperature difference is so great that the lava is capable of heating the water very quickly, and clouds are generated in which much of it is water vapor “, details to SINC David Orejana, Professor in the Department of Mineralogy and Petrology at the Complutense University of Madrid (UCM).

The reaction that takes place is a strong evaporation because the temperature difference is so great that the lava is capable of heating the water very quickly.

But even though it is its main component, water not only contains hydrogen and oxygen (H2O), it has another series of chemical components such as chlorine, carbon and others that can generate varied gases and volatile substances.

These form the whitish cloud or columns (plumes), loaded with hydrochloric acid, as has been observed from the first moment, they report from the Canary Islands Volcanological Institute (INVOLVE).

“Sea water is rich in sodium chloride (NaCl) and the main chemical process that occurs with the high temperature of the lava is, in addition to the water vapor column, the generation of hydrochloric acid (HCl)“, the geochemist explains to SINC Pedro Hernandez of INVOLCAN, an institute that will soon fly a drone with chemical sensors in the area to analyze the gases.

“In addition, other compounds are generated – he adds -, but they are not comparable with hydrochloric from the point of view of safety, since, among other effects, it can cause irritation to the skin or eyes, so it is advisable to stay away from the area where this acid vapor is arriving. ”

This is how the gases are emitted

The expert emphasizes that this cloud has nothing to do with the great volcanic plume: “There is emitted a lot of sulfur dioxide (the main gas that helps us monitor the state of the eruption), carbon dioxide and other compounds, but much more height “.

The possible toxicity of the gases occurs near the entrance of the wash to the sea, a few tens or hundreds of meters, but at a further distance they disperse

The acid steam column generated by incandescent lava and the sea also contains tiny volcanic glass particles. “When in contact with a colder medium and with a large volume of water, the lava cools very quickly, which causes it to solidify mostly in the form of glass, which can fracture due to the thermal difference”, clarifies Orejana.

In general, they are very hot gases – above 100 ºC when the water boils – which can occasionally be toxic. “As soon as they are released into the atmosphere, they will be dispersed and dissolved. There may be a certain risk when you are very close, but obviously since that area has been perimeter several kilometers around, it has been protected and should not be a worrying factor. ”

The teacher Jose Mangas of the University of Las Palmas de Gran Canaria (ULPGC), agrees regarding the possible toxicity of gases: “It occurs near the entrance of the wash into the sea, a few tens or hundreds of meters away, but at a greater distance they disperse, are diluted in the atmosphere and are less dangerous”.

The researcher details the many compounds involved: “The salts dissolved in the sea, such as chlorides, sulfates and carbonates, are converted into acids (hydrochloric HCl, hydrogen sulfide H2S, sulfuric H2SO4, carbon trioxide CO3, bicarbonate HCO3) and oxides (such as sulfur dioxide SO2, sulfur monoxide SO, carbon dioxide CO2, carbon monoxide CO, etc.) but always in a minimal proportion, since we start from 35 grams of salts per liter of seawater (the average concentration of salinity in the oceans)”.

The duration of these processes and emissions will last as long as lava continues to enter the sea, says Mangas, “although there are also magmatic gases that are similar, but affect the vicinity of the explosive fracture and the volcanic cone.”

In any case, the gaseous compounds of the small cloud are going to mix with the atmosphere And, according to experts, in principle its concentration will decrease. The wind regime in the area will determine their movements and dispersal.

What about the water?

The high temperature of the lava leads to boiling at more than 100 ºC the water with which it has direct contact. “That water is evaporating, but as it is further away from the laundry, the temperature progressively decreases,” says the UCM professor.

The temperature of the water gradually recovers the further you move away from the laundry.

The temperature of the seawater gradually recovers as it moves further away from the laundry. “The water can do more than the laundry, except in the contact area where the first one evaporates immediately”, adds Orejana.

As the expert explains, as long as the lava continues to reach the sea and petrify, making the island grow above sea level, this chemical reaction will continue. “There will always be a sheet of water that will be in contact with the hot laundry. As long as it continues to arrive, this response will continue to be generated, because there will always be that difference in temperature,” he asserts.

A local and controlled risk

The effects of gasification o incorporation of gases from the sea wash is restrict, therefore, to the contact zone between lava and sea, which is the one that undergoes evaporation. “When we move away in principle, the effects of this irruption of the laundry in the water tend to disappear or be greatly minimized”, reassures Orejana.

Along the same lines, INVOLCAN experts warn that these steam columns of an acid nature represent a local hazard –Well delimited– for people who visit or are in the coastal area where this encounter between lava and sea takes place.

In addition, they insist that this column of steam is not as energetic as the plume of the volcanic cone where a powerful jet of acidic volcanic gases. These are injected into the atmosphere with so much energy that they reach 5 km in height.

The inhalation or the contact of acid gases and liquids can irritate the skin, the eyes and the respiratory tractIn addition to causing respiratory difficulties, especially in people with pre-existing respiratory diseases, they warn from INVOLCAN.