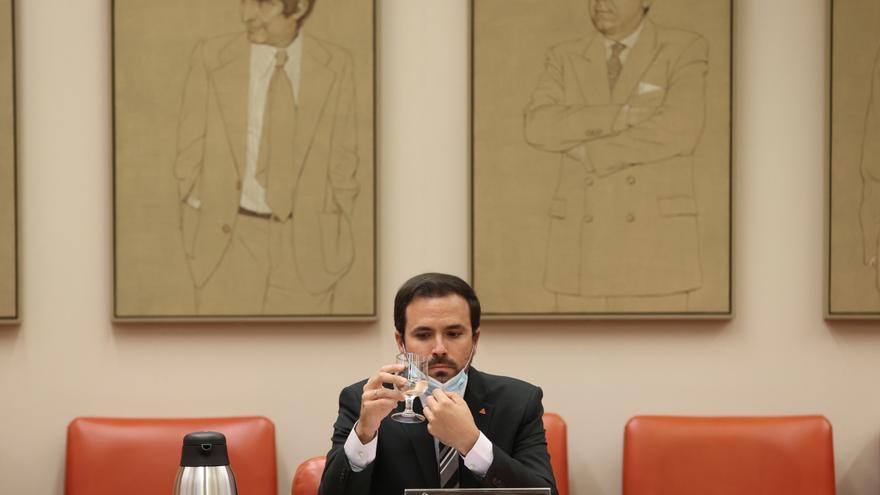 Rectification? Incoordination? The Minister of Consumption, Alberto Garzón, has assured that the complaint against the president of Congress, Meritxell Batet, in which he is accused of "prevarication" for withdrawing the seat of the United Podemos deputy Alberto Rodríguez after being disqualified by the Supreme Court is a legal action of the affected "in a personal capacity".

"It is natural that the affected person has thought to initiate the legal actions that his legal advisers consider appropriate. It is a legal action in a personal capacity by someone who is outraged by this process that should not have occurred," the minister has made clear before presenting in Madrid a campaign against the consumption of sugar among minors and in an attempt to reduce tension within the coalition.

Garzón's words contradict, in any case, those of the United We Can spokesperson in Congress, Pablo Echenique, who on Friday night made it clear that the decision had been made in the party's organs. And also to the note sent from the training to the media, in which it was said "We will present -no, present- a complaint against Batet for prevarication. The decision he has taken yielding to the pressure of the Supreme. To the extreme right. it does enormous damage to democracy and to our country. "

With these words, Garzón tries to uncheck United Podemos from the lawsuit against Batet, despite the fact that last night the formation announced this initiative for alleged "prevarication" of the president of Congress for having yielded to "pressure" from the Supreme Court and the "extreme right "and for deciding to remove Rodríguez from the seat" unilaterally, against the criteria of the lawyers of the Chamber and the Board of Congress. "

In the opinion of the Minister of Consumption, Batet's decision is "a mistake." "The lawyers' report was very clear and stated that the Supreme Court ruling could be complied with without the need to disqualify and withdraw the seat," he emphasized. For this reason, Garzón understands that the affected person has thought of initiating legal actions "by deviating from that line a political error was being produced", in reference to Batet's decision. The minister has acknowledged that he learned about the complaint "like everyone else" and has downplayed the importance of this matter affecting the government coalition.

"We have tense moments like any coalition with various political spaces, but I believe that this does not affect the long journey of the progressive coalition to implement measures that improve the lives of working families," he concluded.

Rodríguez was informed this Friday of the Supreme Court's office that disqualifies him after being convicted of an attack on agents of the authority, a sentence of one year and 15 days in prison, commutable by a fine, and special disqualification for the right of passive suffrage during the time of sentence and Batet has made it known to him personally.

After days of tension between the legislative and judicial powers, Batet's decision to initiate the process for the deputy of the United Podemos Alberto Rodríguez to leave his seat provoked a strong reaction against the United We, led by its leader, Ione Belarra, who charged against the judicial decision.

"Without evidence and without witnesses. This is about #JuecesContraLaDemocracia. Alberto Rodríguez has just been deprived of acting as a deputy and representing the working people of our country from Congress. Democracy loses, the far right advances," said Podemos in his account official. Within hours, the permanent commission of the General Council of the Judiciary condemned Belarra's words against the judges for exceeding his criticism of "freedom of expression."