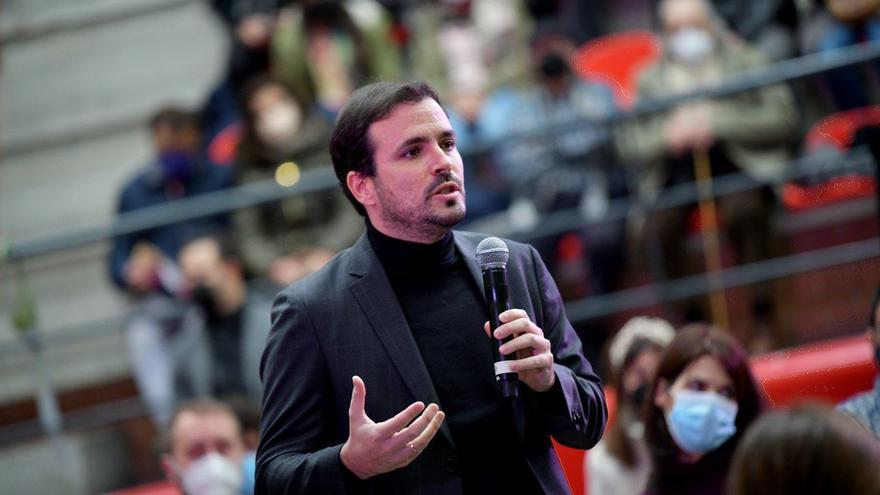 Alberto Garzón has reappeared in the Castilla y León campaign, after spending several days confined by Covid-19 and after the controversy that was unleashed by his words on the production of meat in Spain, some statements that the right wing distorted. His first public act was held this Saturday in Burgos. The Minister of Consumption has taken advantage of this meeting to criticize the political strategy of the regional president, Alfonso Fernández Mañueco and the PP.

“[Mañueco] He began as the candidate of the macro-farms and at this time he is the candidate investigated by the Prosecutor's Office for irregular financing. Perhaps this explains the rush to call the elections," Garzón pointed out, after elDiario.es published that the Prosecutor's Office had denounced the PP of Salamanca before the Court of Auditors for hiding in 2017 the donations it received to pay membership fees. during the primaries that the popular autonomous leader won.

In his speech, he charged hard against Mañueco. The regional president was the first political leader to distort Garzón's words in The Guardian about the macro-farms. For the coordinator of the United Left, this action denotes "an intentionality." As he has stated, the roadmap of the popular goes through "that this campaign does not talk about fundamental issues: the management of the PP for more than 30 years of government in this community."

The events that have occurred in this last month – the controversy of the macro-farms and the complaints of the PP for the vote on the labor reform – are, according to Garzón, the “threads that connect the stark lie with the assault on a City Council already democracy". And he has defended that these facts "are woven by a PP kneeling to the extreme right."

“Mañueco's PP is a popular party that has tied itself to lies, hoaxes, misinformation, not only to confuse the population, but also to delegitimize democracy itself. And we should be very alert to this drift”, lamented Garzón. Along these lines, the national spokesperson for Podemos, Isa Serra, has assured that the popular candidate "only knows how to win with cheats."

With a week to go before the campaign ends, the Ministers of Equality and Consumer Affairs, Irene Montero and Garzón, have traveled to one of the only two provinces in which Podemos obtained representation in 2019. There, the head of Equality has highlighted that for his party "it was very important" to go together with IU and Alianza Verde to these elections to "open a cycle of broad front".

For the first time, Podemos and Izquierda Unida have presented themselves in a single candidacy in that autonomy. "The democratization process is not going to stop and may have a first stop in Castilla y León", highlighted the secretary of Government Action of Podemos, who took advantage of her speech to recall some of the measures promoted by the central government such as the rise of the SMI, the housing law, the law of 'only yes is yes' or the trans law.

"What have we seen in Congress?" Garzón wondered about the validation of the labor reform this Thursday, which went ahead thanks to a single difference vote after the turn of the UPN deputies and the error of Alberto Casero del P.P. “We find ourselves with a right that organizes an ambush, which goes wrong for them due to a mistake”, he has reviewed, to later indicate that “instead of recognizing that it has gone wrong, they flee forward” protected by “a Trumpist speech ”. In this way, he alludes to the "computer error" used by the PP - without providing evidence - to justify Casero's vote in favor of Yolanda Díaz's star project.