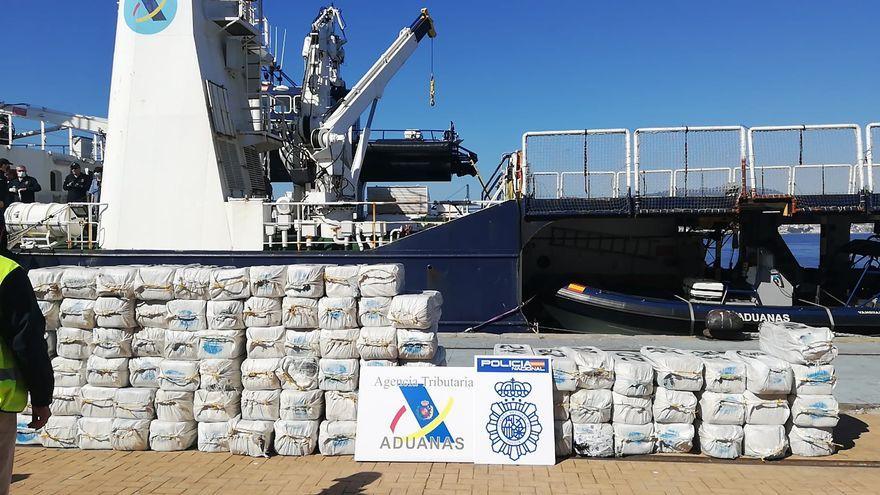 The "narcovelero" intercepted with some 2,000 kilos of cocaine in Atlantic waters has arrived this Friday at the port of Vigo escorted by the Customs Surveillance vessel 'Petrel'. Two of the detainees have already been transferred ashore, while the Court of Instruction 1 of Vigo, acting as guard, is inside the boat for their search.

Although GRECO Pontevedra has confirmed that the drug is linked to a Galician group of drug traffickersThere have been no arrests since the boatmen who were going to transfer the cocaine did not go out to sea. "At least part" of the cocaine seized on the sailboat "was ready for entry to Europe through Galicia," according to official sources.

The Tax Agency, in a joint international operation with the National Police, the British NCA and the MAOC (Center for Analysis and Maritime Operations in Drug Trafficking), OFAST France, DEA, DIRAN Colombia and the Netherlands Police, seized the 2,500 kilos of cocaine transported by the ship, intercepted north of the Azores Islands after the boarding an assault crew of the 'Petrel' with the support of agents of the National Police.

The operation, named 'Midas-Ballestrinque', has allowed the dismantling of a smuggling organization based in the area of ​​the Costa del Sol and Campo de Gibraltar. By means of a combined device on land and sea, the two crew members of the sailboat as well as three other people were arrested in towns in Malaga, including the leader of the group.

Agents of the National Police began the investigation at the end of 2019, after detecting individuals previously investigated for their connection with the maritime transport of cocaine through boats, mainly sailboats. The investigation remains open and focused on the drug lords, whose objective was to collect the drug from the sailboat on the high seas

Approach to the north of Azores

At the beginning of the operation, various breakdowns in the initially chosen boat forced the criminal organization to get another sailboat that was in optimal navigation state, "which forced them to purchase in the Canary Islands the sailboat 'Goldwasser', now intervened, who left for the Caribbean ", explain sources of the investigation.

The ship, already loaded with cocaine, would begin the return journey to introduce the merchandise into Spain. Thus, Authorization was requested from Germany, the flag country of the suspicious vessel, to proceed with his boarding before he could transfer the drugs to another vessel.

The boarding was carried out on October 8 by the assault crew of the special operations ship 'Petrel', some 480 miles north of the Azores Islands, in international waters.

The meteorological conditions in which it was carried out were extremely adverse. It's more, had to be delayed due to the fact that the North Atlantic was affected by Hurricane Sam, category 4 and with waves of more than 9 meters. Finally, the boarding could be carried out "without resistance from the sailboat's crew." On board were two members of the organization, who were arrested. Next, the 'Petrel' started towing the 'Goldwasser' and headed for the port of Vigo, where it docked this Friday.

The head of Customs Surveillance operations, Ignacio Regueiro, highlighted the importance of the operation both because of its "complexity" and because of the weather during the boarding. "An important criminal organization has been dismantled with members from very different countries, the United States, Turkey, Sweden ... The work has been very difficult because the sailboat was very north of the Azores and because of the impact of a hurricane." For his part, the head of El Greco Galicia, Emilio Rodríguez, specified that they have been following this organization since 2019, confirming that the drug was scheduled to enter Europe, having the evidence of "Galician groups related to Swedish and Dutch criminal organizations."

Simultaneously with the boarding of the "narcovelero", three members of the gang were arrested, including the head of the gang. Their homes were also searched in the Malaga towns of Mijas and Fuengirola, where they were seized 34,600 euros in cash, a pistol, mobile phones that they used for their communications, a motorcycle and three high-end large-capacity vehicles, as well as diverse documentation for its study and analysis.

The organization was made up of foreign nationals, all of them with backgrounds related to drug trafficking. Those investigated, who were not known for any legal work, developed a standard of living not in line with their income, handling large sums of cash and spending large amounts on leisure activities, travel and accommodation, "say sources from the investigation.

The organization opted for sailboats for this transport since, "since they are commonly used on transoceanic voyages, their movements can be less suspicious and navigate and stock up easily."

Experts in navigation under extreme conditions

The narcos had experienced individuals dedicated to skip sailing in adverse weather conditions, which they took advantage of to try to evade the action of the security forces. In this particular operation, transported during a dangerous gale in the Atlantic that jeopardized their success.

The members of the organization also had great mobility that made it difficult for the Customs Surveillance investigators of the Tax Agency and the National Police to analyze their activity.

The sailboat, along with the seized drug and the two detained crew members, have been transferred to the port of Vigo due to its greater proximity to the boarding point, although The investigations have been launched from the Court of Instruction No. 4 of La Línea de la Concepción.

It is the fourth criminal organization dedicated to the introduction of cocaine into Spain dismantled since July on the Costa del Sol. Together, these four organizations have seized three and a half tons of cocaine hydrochloride.