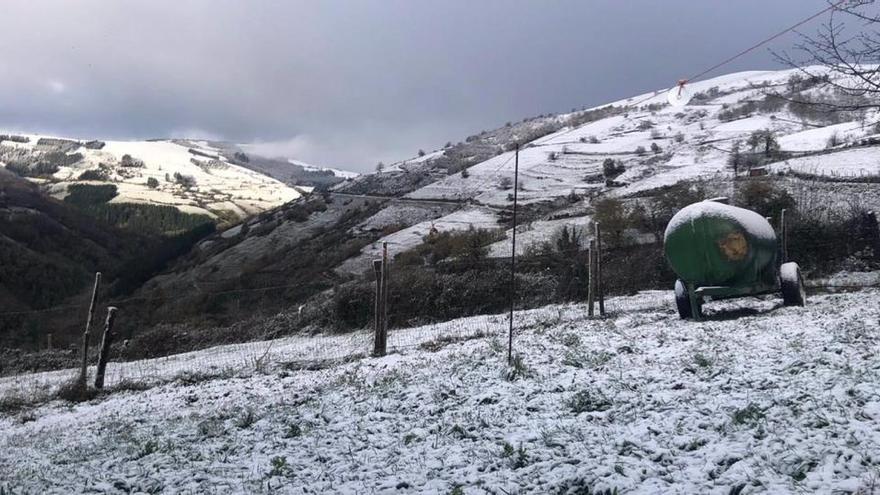 Galicia will today be on a red alert (extreme risk) due to coastal phenomena and yellow due to snow, like Aragon, Castilla y León and Asturias due to the entry of the squall Dora, which will mark the time of the December bridge, according to the State Meteorological Agency (Aemet).

Much of the Peninsula and the City of Melilla will be affected by snow, wind, coastal phenomena and the drop in temperature. Aragón, Castilla y León, Navarra, La Rioja and Asturias will be on a yellow warning due to snowfalls, which will also have it due to coastal phenomena like Cantabria and the Basque Country, while in Andalusia it will be due to coastal phenomena and wind. Due to wind they are on alert in Andalusia, Cantabria, Murcia, the Basque Country and the City of Melilla, while in Castilla-La Mancha, Catalonia and the Community of Madrid they will also be on yellow alert due to low temperatures.

The presence of the storm Dora in the surroundings of the British Isles will continue causing cloudy or overcast skies in Galicia, Cantabrian Sea and northern Navarra, with rainfall and some occasional storms, which could be locally strong or persistent on the coastlines. The cloudiness and rainfall may spread, in a weaker and more dispersed way, to other areas of the Northern plateau, the upper Ebro, the Central system, the Iberian and the Pyrenees. Little cloudy in the peninsular Mediterranean area. In the rest of the Peninsula, intervals at the beginning, tending to a little cloudy in general. In the Balearic Islands, Melilla and the Strait area there will be cloudy intervals with some precipitation. In the Canary Islands, the sky will be cloudy with rainfall and some storms in the north of the islands of greater relief, without ruling them out in the rest.

GALICIA: Cloudy or overcast skies. Weak to moderate rainfall, which may be accompanied by a storm, and which will be locally strong and persistent in the extreme north. The snow level will initially be around 500-600 meters and will rise to 800-1,000 meters. Temperatures without changes or with slight ascents. Weak frosts in the southeast quadrant, more intense in high mountain areas. On the coast, winds from the northwest and north with strong intervals and very strong gusts in exposed areas. Inland, west component winds.

ASTURIAS: Cloudy or overcast sky. Weak to moderate generalized rainfall, which could be accompanied by a storm, and which on the coast could be locally strong and persistent. Snow level around 500-600 meters rising to 800-1,000 meters. Temperatures without significant changes, except in Picos, where the minimum will rise. Weak frosts in the Cordillera, more intense in the peaks. Winds from the west and northwest, with strong intervals and very strong gusts on the coast and in the Cordillera in the afternoon.

CANTABRIA: Cloudy or overcast sky with rains and showers occasionally accompanied by storms, which may be locally strong and persistent in the extreme north, and less frequent and intense in the Campoo area. Snow level between 500-700 meters rising in the afternoon to 700-900 meters. Temperatures unchanged. Widespread frosts in the southern third. West component wind, weak in the interior and more intense on the coast, where it will rage strong with very strong gusts during the second half of the day.

BASQUE COUNTRY: Cloudy or overcast sky, with rains and showers on the coast, unlikely in the early morning and more frequent and intense in the afternoon, when they will occasionally be accompanied by storms and may be locally strong and persistent; in the afternoon, the rainfall will spread to the interior. Snow level between 500-700 meters rising to 800-900 meters. Temperatures unchanged or slightly decreasing. Weak frosts in the interior, being more intense in mountain areas. West component wind, weak in the interior and more intense on the coast, where intervals of strong wind with very strong gusts are expected on the western coast during the second half of the day.

CASTILLA AND LEÓN: In the north and east cloudy or covered with rainfall, frequent in mountainous areas of the north, weak in the rest, they will be more occasional in low areas. In the rest of the cloud without ruling out scattered weak precipitations, more probable and widespread in the Central System. Snow level from 500 to 800 meters. Minimum temperatures in descent and maximum temperatures without changes or in slight decrease. Generalized frosts. Winds from the west, with strong gusts in the mountains.

NAVARRE: Cloudy or overcast sky in the north and northwest with light rains and showers that will occasionally be accompanied by a storm; in the rest, cloudy intervals tending to cloudy with scattered rainfall in the afternoon. Snow level between 500-600 meters going up to 800 meters. Temperatures in slight decrease. Generalized frosts, except in the northwest and south of the Ribera, and more intense in the Pyrenees and in higher areas. South component wind, generally weak.

THE RIOJA: Cloudy or covered sky, with weak precipitations in the Rioja Alta and the Sierra, without ruling them out, although more occasional, in the rest. Snow level from 500 to 800 meters. Minimum temperatures without changes or decreasing and maximum temperatures decreasing. Weak frosts, more intense in mountain areas. Winds from the west, with strong gusts in the mountains.

ARAGON: In the northern third, cloudy skies with rainfall during the second half of the day, more likely and abundant in western areas; snow level between 500 and 700 m, with accumulations that can reach 20 cm in the western valleys of the Pyrenees, 5 cm in northern areas of Cinco Villas and 2 cm in the north of the Hoya de Huesca. In the rest, cloudy intervals tending to cloudy at the end of the day, with weak rainfall in the afternoon that can be in the form of snow in Teruel and points of the Iberian Zaragoza, with the snow level between 600 and 800 m. Temperatures in slight decrease, with local decreases in the northern third. Generalized frosts except in the Ebro valley, strong in the Pyrenees and western Iberian Teruel. Wind from the west and northwest, weak in the north third and moderate in the rest, with some strong gusts in the Iberian in the afternoon.

CATALONIA: Cloudy intervals, tending to cloudy in Lleida during the afternoon, with some weak and scattered showers in coastal areas of Girona during the morning and weak rainfall in the westernmost Pyrenees in the late hours. Snow level between 500 and 700 m in the Pyrenees at the end of the day. Temperatures in slight decrease. Frosts in the interior, strong in the western Pyrenees. Northwest wind loose to moderate in the southern half, and variable loose in the rest.

MADRID’S COMMUNITY: Cloudy sky or with cloudy intervals decreasing in the afternoon to slightly cloudy, except in the Sierra where the sky will remain with cloudy intervals. Probability of weak, occasional and scattered snowfalls in the Sierra, especially at high altitudes. Minimum temperatures in descent and maximums without significant changes. Almost generalized frosts, weak in low areas and more pronounced in the Sierra. Loose west and southwest wind, increasing in intensity in the afternoon without ruling out very strong gusts in peaks and especially exposed areas of the Sierra.

CASTILLA LA MANCHA: Cloudy sky or with cloudy intervals in the Central and Iberian Systems and in the Sierra de Alcaraz, where weak and occasional snowfalls are probable at any level. In the rest of the Community, cloudy intervals decreasing in the afternoon to slightly cloudy or clear. Minimum temperatures in descent and maximums with slight changes, except in the eastern third where they will decrease. Except in the western extremes of the Tajo and Guadiana valleys and in the Hellín region, the frosts will be generalized, of a weak character except in the Sierras and Parameras of the eastern half where they will be more intense. Wind from the west and northwest, more intense in the eastern half with probable very strong gusts in high areas of the Central System and Sierra de Alcaraz.

VALENCIAN COMMUNITY: Skies with cloudy intervals, tending to clear skies in the southern half at the last hours. Falling temperatures, more accentuated than the maximums in the south of Alicante. Frost inside. Moderate west wind, with some strong gusts in the interior of Valencia in the afternoon.

MURCIA: Little cloudy or clear skies. Cloudy intervals and mist in the northern mountains of the region, where some weak and occasional precipitation in the early and late hours is not ruled out. Generally decreasing temperatures, with weak frosts in the Northwest and the Altiplano. Winds from the northwest, with occasional very strong wind gusts in the north of the region and high areas of the rest.

BALEARIC ISLANDS: Cloudy or overcast sky tending from the afternoon to cloudy intervals. Occasional scattered showers that may be accompanied by a storm and small hail. Snow level at 900 meters. Falling temperatures with weak frosts at high elevations in the Sierra de Tramontana. Northwest wind.

ANDALUSIA: Predominance of slightly cloudy skies on the coast, except on the Cadiz coast, where cloudy skies with the probability of occasional rainfall are expected. Cloudy skies in the interior, tending to slightly cloudy in the afternoon. In the mountains of the eastern interior, skies covered with weak rainfall are expected, more frequent in the early hours, although they will persist throughout the day. The snow level will rise from 500 meters to 700-900 meters throughout the day, highlighting the accumulations in the Cazorla and Segura mountains above 800 meters. Morning mists in the eastern interior, with fogs in the mountains. Falling temperatures, except in the northwest third of the community, where they will remain unchanged. Frosts in the eastern interior and high areas of the rest. Winds from the west or northwest, occasionally strong with very strong gusts in the upper areas of the eastern third.

CANARY ISLANDS: Cloudy to cover in the north of the islands of greater relief and Lanzarote, and cloudy tending at intervals in the central hours, in the rest. Occasional and scattered light rains in Lanzarote, Fuerteventura, El Hierro and leeward of the other islands. Locally persistent in the north and northeast of Gran Canaria, north and southeast of Tenerife, north of La Gomera, and north and east of La Palma. Minimum temperatures with few changes and maximums slightly decreasing, which will be moderate in the north of the islands. Wind from north to northeast with probable strong intervals on the east and west slopes of the islands of greater relief in the early morning and late in the day.