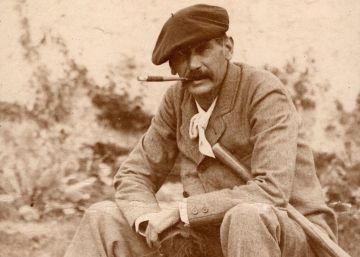 In February 1897, Benito Pérez Galdós He read his speech at the Royal Spanish Academy. In that text, titled Spanish society as a novel subject, he exposed what we would now call his poetics, his way of understanding the novel as a genre, the ambitions and purposes that guided his writing. One of the phrases of that speech would become a Galdosian motto. Image of life is the novel, he said then, and when he told that of the Spaniards, his books were tracing the image of a country that was called the same as ours, although they are no longer the same. But beyond emotion, admiration, pleasure, the best reason to read the other great Spanish narrator of all time today is his amazing ability to explain to us what has happened to us, what is still happening to us.

Galdós was never neutral, and in the beginning it encourages a brand new democratic illusion. The Golden Fountain, His second novel, was published in 1871, a year before it appeared the first of the National Episodes, who take it as a model. In The fountainGaldos Madrid back to 1821, where liberals have regained hope. The odious Fernando VII has sworn the Constitution. Public happiness, progress, the birth of a more modern and egalitarian Spain is looming on the horizon. So excuse the young Bozmediano to the exalted who have run over the street who looks like a poor old man. No revolutions without excess, tells him as he comes home, but the government put an end to these altercations. Meanwhile, the old man is silent. Bozmediano cannot know that it is precisely he who, with Fernando’s money, pays the agitators, the arsonists, the energumens destined to scare the people, to convince him that only the absolute power of a tyrannical king will work his peace and his happiness.

Along the National EpisodesGaldós develops this bitter principle in a tragic rosary of frustrated hopes, armed revolts and civil wars that always begin in the same way. In the richest regions of Spain, the Basque Country, Navarra, Catalonia, the old aristocracy and the burgeoning bourgeoisie who have nothing to gain from modernizers plans liberal governments of Madrid, raise armies under the banner of God, Tradition and the absolute King who identify with Don Carlos, the younger and more reactionary brother of Fernando VII. From 1833, the Carlists always lose the wars that begin but are also always so generously forgiven by the victors that they are able to return to conspire at the very moment of their defeat. Thus, in 1840, in 1849, in 1876, when it seems that everything has finished on the surface, everything starts again in the underground.

Galdós readers have a broader perspective of what we are living than the Spaniards who have never read it. We know why Catalan independence abolishes the nineteenth century in a story that insists crushingly on the eighteenth, as if it were closer than that. We know that supporters of the hard hand called themselves moderates, just as the ultra-right today benefits from terms such as center-right or constitutionalism. We know that republicanism was not a foreign virus inoculated with treason in the ignorant Spanish people of 1931, but an aspiration solidly installed in national progressive thinking since the Cortes of Cádiz. We know why the term “liberal”, which exists in almost every language in the world, is a Spanish word and that, precisely because of that, Franco strove to remove the 19th century memory of “his” Spain, condemning it to a limbo from which he has not been fully rescued yet. We also know, perhaps above all, that the only Civil War we know by that name — as if the Carlists had not been — was the outcome of a conflict that lasted more than a century. Since 1812, two Spain fought each other under antagonistic flags. Freedom, progress, equality, fought tradition, clericalism, reaction, and not even winning in three wars in a row managed to win the future. The country where I was born was still a product of his defeat.

Galdos was never neutral, and In the end the desolation is almost absolute. In 1897, Mercy He certified the wreck of all dreams. The Restoration had suffocated the illusions of Bozmediano, the attempts of modernization of the country agonized covered with dust. The bourgeoisie, which should have been the engine of social transformation, imitated the proverbial selfishness of the aristocracy instead of leading the democratic state. The middle classes only aspired to climb in the same elevator, disregarding the poorest, who allowed themselves to die in the stream.

A millimeter here survives Benigna, Mrs. Benina, Nina, three different names for a character that embodies the dignity of the Spanish people in the context of the fiercest crisis. Benigna asks for alms at the door of a church to feed her lady, the ruined lady who eats what her maid gives her. Mrs. Benina runs, goes, comes, asks for a hard loan, pawns, rescues, runs out in a relentless fight and still helps those who have less than her. His only heritage is his friend Almudena, a moro, blind, more marginal than miserable beggar, who loves her well. Galdos, creator of extraordinary female characters, through which told the world with as much ambition as he displayed in his male characters, deposited in Benigna, in its nobility, in their generosity, in her tenderness, the last of his hopes. She represents the fragile strand of vitality that preserves the dying, self-absorbed and moldy empire, which may still deserve the opportunity to be reborn.

Galdos is understood read Spain, Wreck with her, find reasons to continue believing.

It is also an indispensable writer.

2,000 books Coinciding with the centenary of his death, the Instituto Cervantes and the Community of Madrid today give 2,000 copies in facsimile edition of the third of the National Episodes, the novel On March 19 and May 2. They are collected at the headquarters of the Cervantes Institute and the Ministry of Culture.

Tributes Madrid City Council pays tribute to the writer on his statue of the Retiro Park from 12.00. An hour before, another tribute will take place before the tomb of Galdós in the cemetery of La Almudena, attended by representatives of several institutions. The Ateneo de Madrid will host conferences throughout the year and events around the life and work of the author of Fortunata and Jacinta.

Special day The Government of the Canary Islands, the Cabildo de Gran Canaria and the City Council of Las Palmas have organized a special day to commemorate the Canarian writer and disseminate his work with street theater, institutional events and open house at his house-museum, which he will give away Books to visitors. These days also starts shooting Galdós, a documentary about the author of the Canarian director Gustavo Socorro.