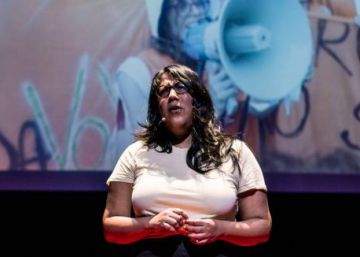 Working Wednesday, ten o’clock at night. The lobby of the Teatro del Barrio de Madrid is crowded. The function is about to begin What madness I fall in love with you, there is much noise, more excitement than usual in a theater. More than spectators, we talk about fans. Enthusiastic followers of the Peruvian writer Gabriela Wiener, resident in Spain for years, author and interpreter of this unique work in which he narrates his polyamory experience with a man and a woman with whom he shares two children. They know exactly what they are going to see, Wiener has told it dozens of times in articles, interviews and forums, but that is precisely why they are there: they want to hear it told in person, check that it is true, share it with her live. It is the morbid of autofiction squared.

In this way, the complicity between the armchair patio and the stage is assured from the beginning. This function would not work otherwise, since its format demands that premise: this is stand up full-fledged, with its regulatory microphone and a few scenic support resources. Wiener exploits that complicity to the fullest, awaits his reactions, pauses to create expectation. He moves around the stage safely, although he apologizes at the beginning for not being an actress or singer or dancer and, despite this, he prepares to act, sing and dance. He does neither good nor bad: he does it really, he is not asked for more. Only an appreciation: it would gain presence and rhythm if it told the story by heart, without resorting to the script it holds at all times.

The best, in any case, is your sincerity. The way he demystifies polyamory. He tells everyday details of his experience to show that, deep down, it is not so different from a traditional relationship: jealousy, crisis, anger, lack of sex. It moves when he brings the other two protagonists of the trio to the stage. And so, by demystifying the much mythified polyamory, he puts it within everyone’s reach, demonstrating that it is possible to skip any social convention without needing to be an antihero.