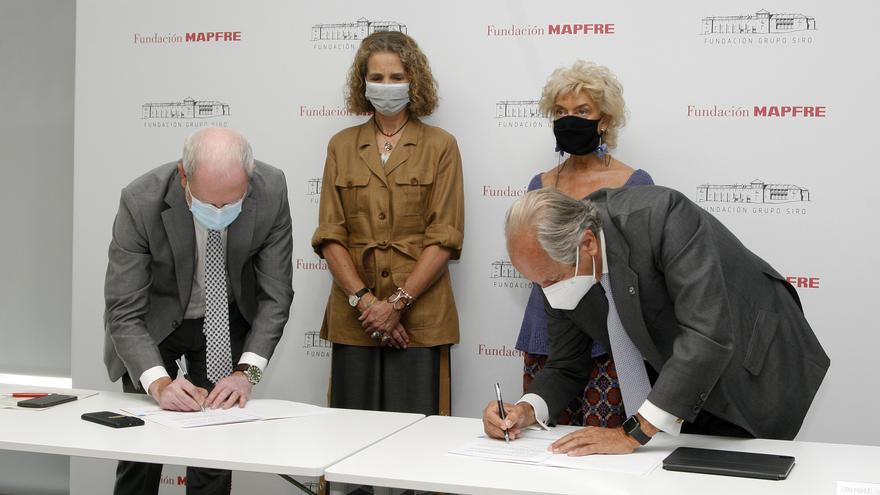 Fundación MAPFRE and Fundación Grupo Siro announced this Friday that they will distribute a total of two million nutritional biscuits enriched with vitamins and minerals to help fill the nutritional deficiencies of 20,000 families with dietary deficiencies.

Its distribution in Spain will begin in September and will be carried out through the Sé Solidario project of Fundación MAPFRE, the Spanish Federation of Banks of Food (FESBAL) and the MAPFRE volunteer network.

The cookies, which will be distributed free of charge and are not available for sale to the public, have been developed by Fundación Grupo Siro as a supplement to food and can provide the energy and nutrients that a person needs to cover their recommended daily intake. This aspect is key given the difficulty that social entities have to preserve, and therefore provide, fresh food, essential for a balanced diet.

The main differential characteristic of this cookie is that, For only 30 cents, which is what the cost of 100 grams represents, 50% of the vitamins and minerals that a person needs per day are guaranteed.

The product contains vitamins A, B1, B2, B3, B5, B6, B12, C, D and E and folic acid, as well as protein, calcium, iron, magnesium, iodine and high fiber content. For its preparation, wholemeal flours, high oleic sunflower oil and reduced amounts of salt and sugars below the critical limit stipulated by the WHO have been used, which has allowed obtaining a Nutriscore A rating. The recommendations have also been taken into account. of the CODEX Alimentarius Global, as well as the criteria of the nutrient profile model of the Pan American Health Organization.

“In Spain there are cases of hidden hunger, a situation that has been increased as a result of the pandemic”, They have underlined from the Spanish Nutrition Foundation (FEN), an entity that supports the project and that for years has collaborated with Fundación MAPFRE on projects related to healthy eating and lifestyles. This term, that of “hidden hunger”, which affects more than 2,000 million people in the world and 24.3% of the population under 5 years of age in Europe, according to Unicef, refers to the situation of malnutrition that currently live those people who with adequate energy consumption do not meet the needs of some micronutrients, such as vitamins A and D, iron and zinc.

Too there are the elderly, a “vulnerable group”, which traditionally “suffers a greater risk of malnutrition”, among other causes, due to lack of appetite, chewing problems, poly-medication, physical inactivity and loneliness.

Pandemic and changes in diet

“Between 2019 and 2020, Spain has experienced changes in diet”, According to what the FEN has indicated today. During this period, which he has indicated, Spaniards have increased the consumption of all food groups, and therefore calories, and after several years of moderate decline, they have gone from consuming 1,965 kcal on average in 2019, to 2,194 kcal, in 2020. These figures, which in the opinion of the Spanish Nutrition Foundation do not have to be negative, do reveal the imbalance in the caloric profile that has been dragging on for years and that does not fit with the traditional Mediterranean diet pattern.

With the development of the nutritional cookie, Fundación MAPFRE and Fundación Grupo Siro thus join forces to fight malnutrition, which has grown in all countries as a result of the pandemic. In this sense, both entities have today signed a collaboration agreement, with which the donation of the two million cookies is officially approved, as well as the support of Fundación MAPFRE for the project that Fundación Grupo Siro has recently launched in Guatemala. where levels of chronic child malnutrition are worrisome, and to a volunteer program in which MAPFRE employees and their families will participate.

The event was held at I + Dea, the Cerealto Siro Foods research and development center, in El Espinar, Segovia, and included the participation of SAR, Infanta Doña Elena, Project Director of Fundación MAPFRE, who has visited the I + Dea center in the company of Juan Manuel González Serna, president of the Grupo Siro Foundation, and shared impressions with the research team that has developed the enriched cookie, after two years of work.

Impact on development and growth

“Malnutrition is a problem that affects more than 800 million people in the world,” said Julio Domingo, general director of Fundación MAPFRE, who also referred to Unicef ​​data that indicate that Spain is among the European Union countries with the highest rates of child malnutrition. “We speak of many people, he has indicated, who currently do not have access to a diet that provides them with the recommended nutrients, with the impact that this has on their health and, in the case of minors, on their development and growth. “Joining the Grupo Siro Foundation mission to combat malnutrition, and being the first to be able to do so in Spain through this project, gives us great satisfaction,” he stated.

Juan Manuel González-Serna, president of Fundación Grupo Siro, has also been very happy for the creation of “this pioneering non-profit product that has been the result of two years of research by a Spanish team.” He has also been “very grateful to Fundación MAPFRE for helping us fulfill a dream, which is to contribute to reducing malnutrition in the world”, a task, he pointed out, “that we cannot do alone”. In this sense, the president of the Grupo Siro Foundation has encouraged other NGOs, foundations, private companies or local administrations to join the project, and thus contribute to fighting malnutrition.

In addition to Fundación MAPFRE, entities such as HM Hospitales and the HM Hospitales Research Foundation, Food For The Poor, Cáritas Arquidiocesana de Guatemala, Digisalud and DHL Supply Chain, among others, are partners in the program.

Guatemala, fourth country in the world with the highest malnutrition

In Guatemala, where the Grupo Siro Foundation has already donated a total of 40,000 kilos of nutritional biscuits, this entity will soon launch a clinical trial with the aim of validating the efficacy of this product in food and verifying its positive impact on health. . The study will be carried out among 200 minors, between 3 and 6 years old, and will be led by the HM Hospitales Research Foundation, in collaboration with Cáritas Arquidiocesana de Guatemala and Digisalud.

Currently, in this country, almost half of children under five (49.8%) suffer from chronic malnutrition, which makes Guatemala the first country in Latin America and the fourth in the world with the highest child malnutrition, according to data from Unicef.