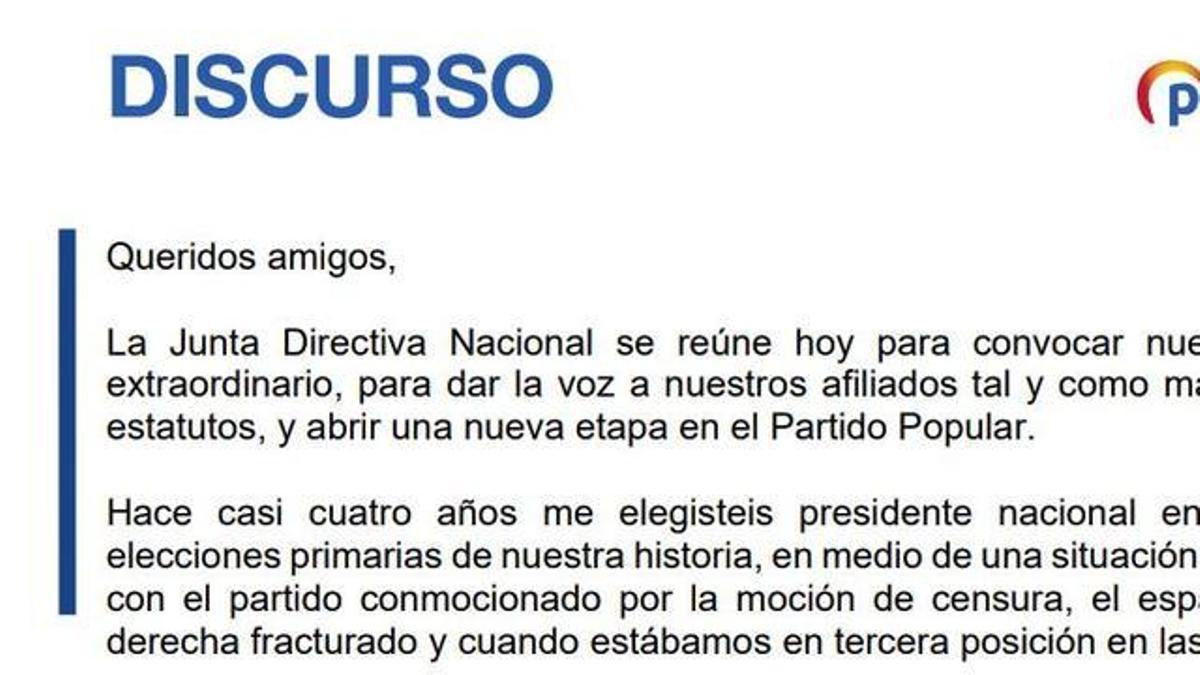 The National Board of Directors meets today to convene our extraordinary congress, to give voice to our members as our statutes mark, and open a new stage in the Popular Party.

Almost four years ago you elected me national president in the first primary elections in our history, in the midst of a very complex situation: with the party shaken by the motion of censure, the center-right space fractured and when we were in third position in the polls .

A few months later the elections in Andalusia were brought forward, with which we achieved a PP government in the Junta for the first time. That is why they did not take long to advance the general elections, in which we avoided the blow that the Italian and French center-right had already suffered and, a few months later, we managed to absorb our electoral adversary in the repetition of the elections.

Meanwhile, the regional and municipal elections launched a new batch of politicians with freedom governments that we had to negotiate from the national leadership at the request of our rivals. Your great work and that of the rest of the presidents, mayors and councilors makes me feel very proud.

Very especially that of Alberto Núñez Feijoo who has always given me his loyalty and friendship, the same that he will receive from me for whatever he decides to do in the future.

These years, we have not had a quiet quarter to focus on transferring our national project, because, those three elections in just one year, were followed by the Galician, Basque, Catalan, Madrid, Castilian and Leonese elections, with various motions of censorship and attacks on our stability in between.

Despite the difficulties, in this time we have focused on defending the mandate of the national congress: restore the illusion to the militants, renew the organization by adding those who had left and defend internal unity to give everyone their place, regardless Conservative, Liberal, or Christian Democrat. That is our great political family.

It is not easy to face a government that has used all the power of the State against the opposition and the democratic consensus of the Transition and the Constitution. We have never had such radical opponents and with fewer limits, but we have always lived up to our responsibilities with Spain.

We are a state party, and thus we have acted responsibly in the pandemic, in economic reconstruction, in the migratory crises or now in the war in Ukraine.

And we are a government party, with a program for the future that was outlined in the massive Valencia Convention, after a year of work with hundreds of national and international personalities.

We launched there a necessary and urgent contract with Spain to strengthen our institutions and freedoms, to recover our prosperity and progress, and to safeguard our equality and well-being. That project remains unfinished but I am sure it will be useful for the future.

I have always believed that values ​​are the pillars of our party, and only with ideas, the correct ones, can a better future be achieved for our compatriots.

That is why I have been guided at all times by the principles that I proposed when you elected me president: the defense of freedom, the unity of Spain, the rule of law, the family, and public exemplarity.

I cannot conceive of politics without the ethics of responsibility, based on two essential commitments: the construction of a reformist, focused and winning political project, and regeneration to recover society's trust in the good name of our party.

I believe that the difficult option must always be put before the comfortable one and our principles are useless if we do not stick to them in the most complex moments.

The PP belongs to its affiliates but it is also the heritage of all Spaniards. That is why I regret everything that has been done wrong and the situation that our militants and voters have suffered during this week. And I also feel, I have to say it, the reaction that I have had to suffer, which is unprecedented in our democratic history, and I sincerely believe that I do not deserve and would not deserve any of you.

In spite of everything, every day at the head of the game has been an honour. I have been very happy representing this great organization because I believe that by doing so I was providing the best service to Spain.

I have always put the interests of the party before my own, and I have tried to work in a serious, loyal and constructive way.

I have once said that the murder of Miguel Ángel Blanco made me think about taking a step towards participating in politics, the cases of corruption led me to adopt a more decisive public position, the blow to legality in Catalonia made me decide to lead the party , the irruption of populism forced me to fight for the reunification of our electoral space and the economic crisis made me advance a government plan to solve the problems of the Spanish people.

All these years, we have worked tirelessly, touring Spain ten times, leaving no sector unheard, and no problem unanswered on behalf of the most important project in national politics, which is ours.

I have a very clear conscience, full of gratitude, without rancor or frustration. You have allowed me to be in the history of Spain, alongside Fraga, Aznar and Rajoy. Next to the European and American leaders of our political alliance. And especially by your side.

I proposed most of you who are on this Board of Directors as candidates for different responsibilities. You have all given your best over the years and I am proud of your work and what we have achieved together.

I have always done and will do what is best for the party and for Spain, and now I ask you to achieve a project of unity with which we come out stronger and that we do not spend another minute talking about ourselves but about what the Spanish urgently need.

Our maximum responsibility is to change this government as soon as possible and we are closer than ever.

In these difficult times, after a terrible pandemic, and in the midst of an international conflict, Spaniards need a political project that allows young people to achieve their dreams, families to continue making plans, and our elders to calmly look back.

We must promote an agenda for a new majority that rescues Spaniards from this deep economic and social crisis, that recovers our international prestige and that safeguards our welfare state.

The enemies of freedom are still there: exclusive nationalism, the heirs of the terrorists, radical populism and identity collectivism.

And the recipes against them are clear: freedom, constitutionalism, Europeanism and Atlanticism, equality of all Spaniards in rights and obligations, judicial independence, low taxes to create jobs and freedom to choose the best public services.

In these liquid times, of post-truth and agitation, I still believe in serious and institutional politics, in the defense of reason against the invasion of sentimentality and the rise of populism.

Responsibility is not currently on the rise, but we must not fall into the temptation of competing on the playing field of our adversaries, because we would leave a social majority orphan while we lose the political and moral strength to appeal to it.

Now we are the only great formation that invokes everything that unites us as Spaniards, the values ​​we share. We are not the net that divides the field into two halves or a politically neutral zone between two opposite poles.

We are an engine of progress and freedom, we are the point of compass of reasonable and generous Spain that wants to be brought back together to do things together and not against anyone.

In a few years, we have managed to regroup the space of centrality and moderation at a time when all democracies are crossing the desert of radicalism and polarization.

We have placed our party at the forefront of change and I am convinced that the path traveled will culminate very soon in the reunion of our entire social base in the common home of the reformist and liberal center that is what we are and what we have always been. .

I sincerely wish all the luck to the next president of the Popular Party, I wish him much success in his efforts and all the success to arouse the loyalty and support that he will undoubtedly need. Mine will be the first, from the utmost prudence and discretion.

Our vocation will always be the defense of freedom and the Spanish Nation, the memory of the victims of terrorism, the tribute to harmony and reconciliation that democracy gave us, the guarantee of progress and well-being and the strengthening of our security. and foreign prestige.

In short, our mission, that of all of us, is to continue Spain's path of success, as one of the fundamental pillars of the history of humanity.

The PP will always be the great main square in Spain for constitutionalists and pro-Europeans. A Spain that is looking forward to breathing again PP.

We have already managed to get the party on its feet and now it is on its way to the government.

Four years ago I told you that I came with white hands, clean pockets and a heart in love with Spain, and so I will remain at your disposal, to help in this new stage and to support those who continue it.

Being president of the PP is a privilege, not a right, and I will always honor that privilege.

I don't want Spain because it's perfect, but so that it can be, and I'm sure that, with everyone's efforts, we'll make it possible very soon.

Thank you very much