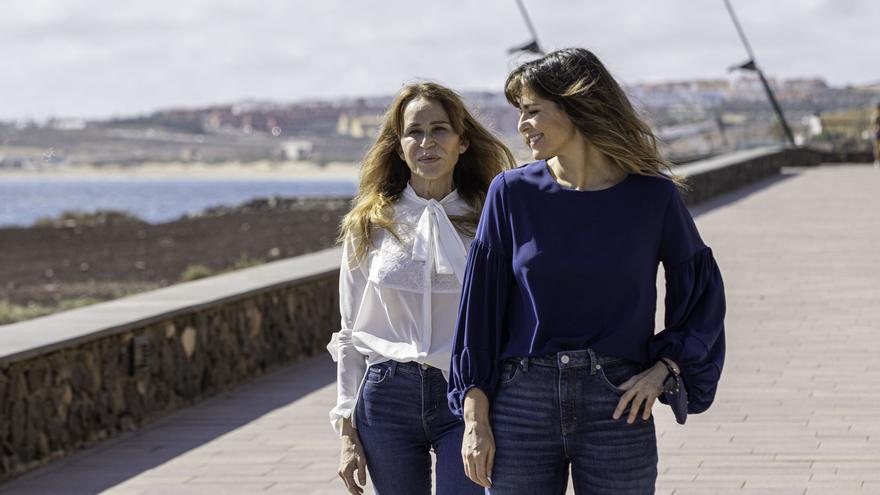 The stage of the Palace of Training and Congresses on the island of Fuerteventura hosts on February 27 and 28 the national premiere of the comedy ‘The Great Depression’ which, under the direction of Felix Tasty, interpreted by the popular Canarian actress Antonia San Juan and the well-known Valencian presenter Nuria Roca, whose theatrical debut occurs with the aforementioned work.

The aforementioned theatrical production, co-produced by the company Acelera and the Cabildo de Fuerteventura, has sold out the seats for the two scheduled functions, before its arrival at the Pérez Galdós theater in the capital of Gran Canaria, where it will be presented on the 12th, 13th and 14th March, and then tour until July through forty different scenic spaces in the Canary Islands and, later, undertake the circuit through the main theaters of the Peninsula.

This morning I can set up at a press conference in which the Minister of Culture, Andrés Briansó, the director Felix Sabroso, and the actresses Antonia San Juan and Nuria Roca were present.

The island councilor for Culture of the Cabildo de Fuerteventura, Andrés Briansó, welcomed the fact that both the premiere and the subsequent national tour of the production ‘The Great Depression’ is “associated with the name of Fuerteventura, which will be a great promotion for the island that will allow his name to walk through the numerous Spanish theaters in which the work co-produced by the Cabildo Majorero will be represented ”

For his part, the theatrical director Félix Sabroso, pointed out in the presentation of the show that premieres in absolute terms on February 27 in Fuerteventura, that ‘The Great Depression’ “addresses a very varied palette of essential human themes”, at the same time who confessed that he felt “happy to resume my stage career and meet again with the actress Antonia San Juan, which is a luxury of life,” he said. “All this treated with a lot of sense of humor because it is a great moment to laugh.”

The Valencian presenter Nuria Roca admitted “being delighted to visit the Canary Islands and, more specifically, Fuerteventura, an island that I did not know. Everything that happens these days will remain engraved in my heart and my retina”, confessed the actress who plays Marta in this work that he described as “delicious and intelligent, whose text has endured the passage of time very well”.

“I was not expecting the call from Sabroso to offer me the role.” The audience will evade with ‘The great depression’ that talks about things that we all understand: friendship, love, the troubles of life, failure … it’s a very ironic and brilliant comedy, “stressed Roca.

Antonia San Juan warned that her character Manuela experiences for Marta “a sublimated love based on a somewhat toxic relationship. No one is going to confess that she behaves like this with her friends. They will see other people reflected,” said San Juan, for whom “Canarias It is a single island. To premiere in my land is to come with the fish already sold, because there is a predisposition of the public to come and see you, “joked the actress. “I am in my land and people love me.”

“Time gives you more responsibility and peace of mind when facing a premiere, although there is always a dose of restlessness and nerves that, on the other hand, indicate that you are alive,” concluded San Juan.

The production team will remain in Fuerteventura until the premiere, finishing the rehearsals at the Palacio de Formación y Congresos in Puerto del Rosario. The spectacular scenic design of ‘The Great Depression’ is the work of Carlos Santos. An integrated space that plays with a bedroom, a living room and a dressing room, masterfully integrates with the superb lighting set by Juani González.

The performance addresses the reunion of Marta and Manuela, two women in their fifties and linked by the history of their close friendship, coinciding with the complicated moment of emotional crisis of one of them. The two women, together now after eight long years of separation that have weakened the close friendship they always maintained, will review their lives, their failures and their loneliness, showing, in scathing and funny dialogues, their fears, their life experiences and their contradictions: everything that differentiates them abysmally but that, paradoxically, has led them to similar circumstances. Antonia San Juan plays Manuela, while Nuria Roca, in her theatrical debut, plays the role of Marta.

‘The great depression’ was already released successfully in Spain in 2011 with Loles León and Bibiana Fernández of protagonists, remaining for two consecutive years on the bill. The aforementioned montage premiered last year 2020 in Argentina, counting in its cast with the dancer and vedette Moria Casán and the singer Nacha Guevara, who also directs it.

It is the first time that Nuria Roca, writer, presenter and current collaborator of the program ‘El Hormiguero’ directed by Pablo Motos, takes the stage to play a role.

The Valencian woman, who in 1998 made the leap to national television under the guidance of Chicho Ibáñez Serrador, in recent years has worked for four of the six generalist networks that coexist in Spain.

For her part, Antonia San Juan is an old acquaintance of Félix Sabroso, with whom she has shared more than one project, such as the 2012 montage ‘From the waist down’ or the 1998 film, ‘El grito en el cielo’. In addition, Sabroso has written for the Canarian actress the text of one of the monologues that appear in the libretto of her show ‘Mi lucha’.

Antonia San Juan’s idyll with the Canarian production company Acelera has also been close in recent years, since the actress has starred in two of Acelera’s most successful productions, ‘El cielo according to San Juan’ (2017) and ‘Cuentos en la night of San Juan ‘(2018).

‘The Great Depression’ will be distributed nationwide by the Seda company, one of the leading companies in the sector of show distribution, which currently markets around fifteen theatrical works in different theaters in Spain.

The production of ‘The great depression’ has the Valencian director of photography in the cinema Jau Fornés, who has been working with Sabroso since his last feature film, ‘The time of the monsters’. Fornés has been involved in film and television productions such as ‘Truman’, ‘The last of the Philippines’, ‘My great night’, ‘El continental’, ‘Veneno’, ‘Señoras del (h) AMPA’, ‘Elite’ or ‘Secrets of State’, among many others.

It should be remembered that both Félix Sabroso and Dunia Ayaso, who died six years ago, are scriptwriters and directors of some successful Spanish screen films such as’ Fea ‘(his first feature film directed in 1994),’ Sorry, pretty, but Lucas wanted me to me ‘(Best Screenplay Award at the Valencia Film Festival in 1996),’ El grito en el cielo ‘,’ Descongélate ‘(produced by El Deseo, producer of the Almodóvar brothers) or’ La isla interior ‘. They developed their professional work together as inseparable companions of work and life. Between 1996 and 2004, they premiered five theatrical productions: ‘What became of the Sue sisters?’, ‘Other women’, ‘The sinking of the Titanic’, ‘The powerfulboys’ and ‘With the glory under the arm’, to the which followed ‘Lifting’, ‘The great depression’, ‘We hysterics are the maximum’ or ‘From the waist down’, starring Antonia San Juan.

For television, they wrote large audience series like ‘Mujeres’ or ‘Take off you to put on me’. In 2007 they face their fifth film, ‘The naked years’. Their last joint project, the feature film ‘The time of the monsters’, was directed years later and alone by Félix Sabroso.

Sabroso, also solo, is the author of one of the texts of the show ‘Mi lucha’ by Antonia San Juan and directed and written other comedies such as ‘Desatadas’ and ‘El amor es en el aire’, with Bibiana Fernández, Manuel Banderas, Alaska and Mario Vaquerizo.