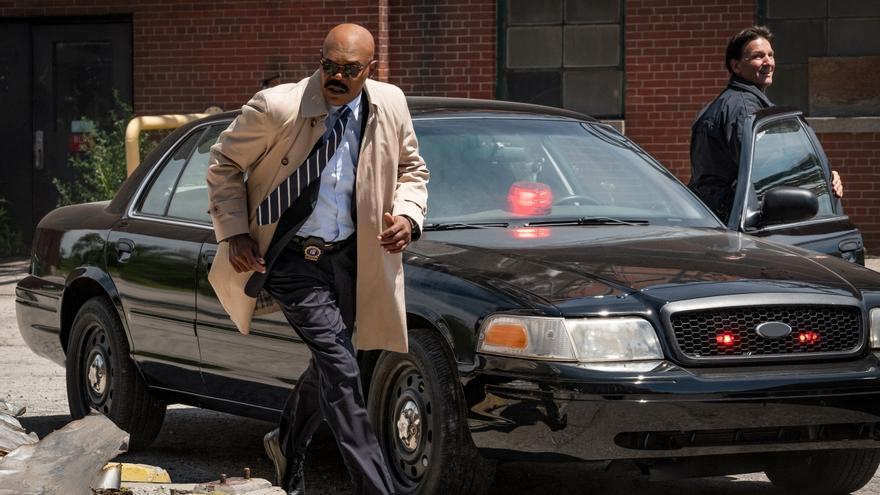 Madrid, May 20 (EFE) .- The eighth installment of the horror saga “Saw” opens the movie billboard this weekend in which Fernando Colomo premieres his new comedy, “Polyamory for beginners”, and the independent filmmaker Kelly Reichardt proposes a revision of the western in the acclaimed “First cow”.

SAMUEL L. JACKSON IN A NEW DELIVERY OF THE SAGA OF HORROR ‘SAW’

A retired police officer (Samuel L. Jackson), detective Ezekiel “Zeke” Banks (Chris Rock) and rookie William (Max Minghella) take the reins of an investigation into a series of murders that refer to what happened in the past in this new film directed by Darren Lynn Bousman (‘Saw II’, ‘Saw III’, ‘Saw IV’).

“Spiral. Saw” is the eighth installment of the famous and bloody horror saga released by James Wan in 2004 and revolves around John Kramer, aka “Jigsaw”, a serial killer who traps his victims in situations he calls “games” or “tests” and subjects them to all kinds of physical and psychological torture.

KARRA ELEJALDE PREMIERES IN THE POLIAMOR OF THE HAND OF COLOMO

Fundamental voice of the Spanish comedy and director of titles such as “Tigres de papel”, “Descend al moro”, “La vida alegre” or “The butterfly effect”, Fernando Colomo delves into the complications of polyamory in his new comedy starring Karra Elejalde, Quim Ávila and Toni Acosta.

A married couple supports their 28-year-old son, a mediocre youtuber. The father sets out to get his son to be successful in the networks and makes him the ‘ranger of love’. The entanglements begin when he falls in love with Amanda (María Pedraza) without knowing that she is polyamorous.

Absent from the major awards of the film season, Kelly Reichardt’s “First cow” has been one of the critics’ favorite films in the last year, a tale of male friendship and tenderness in the middle of the American Wild West.

Reichardt, unknown to the general public despite her long and appreciated career, with titles such as “Old joy” (2006) or “Wendy & Lucy” (2008), shows once again her predilection for marginal characters and stories that question the mythology of the american dream.

“ONCE UPON A TIME IN QUEENS”, AN ASPIRANT TO NBA STAR

Written, directed and co-starring Eddie Huang, “Once Upon a Time in Queens” (Universal Pictures) tells the story of Alfred Chin (aka Boogie), an Asian-American aspiring NBA star whose controlling mother has other plans for him and you will have to choose between pursuing your dreams or staying true to your traditions.

It is Huang’s first feature film, whose family memoir, “Fresh Off the Boat,” was a bestseller and became a comedy on ABC. He currently owns the Baohaus restaurant in Manhattan and is the host of the Huang’s World show on Vice.

After years working in the film industry as a representative of actors, Borja de la Vega makes his directorial debut with the artisan “Mía y Moi”, which addresses issues such as family inheritances and brotherly love.

Bruna Cusí and Ricardo Gómez are the brothers Mía and Moi who spend a few summer days in their family home after having lost their mother, who suffered mistreatment by their father. As she tries to turn the page, he goes through a nervous breakdown. Eneko Sagardoy and Joe Manjón complete the cast.

“SWEAT”, THE DARK FACE OF THE “INFLUENCERS” LIFE

Directed by the Swedish Magnus von Horn and with the endorsement of having passed through the Cannes and Seville festivals, “Sweat” narrates three days in the life of Sylwia, a “fitness influencer” with 600,000 followers in networks and a deep existential emptiness.

Able to post 20 videos a day with exercise charts, self-motivation speeches or healthy recipes, at any given moment she decides to share her feelings as well and discover her most vulnerable side.

“SMALL COUNTRY”, A CHILDHOOD INTERRUPTED BY THE WAR IN RWANDA

Winner of the award for best film and best actress (Isabelle Kabano) at the BCN Film Fest, French Eric Barbier directs this film adaptation of “Petit Pays”, an autobiographical tale by the writer and singer Gaël Faye that sold more than 700,000 copies and it was translated into 30 languages.

The film tells the story of Gabriel, a ten-year-old boy who spends the day with his friends on the streets of Bujumbura, Burundi. His paradise teeters with the separation of his parents and shatters into a thousand pieces with the outbreak of the 1993 civil war in neighboring Rwanda.

“PIXIE”, A CRIMINAL COMEDY WITH OLIVIA COOKE AND ALEC BALDWIN

Without going through theaters, this gangster comedy set in Ireland and starring the young Olivia Cooke, Ben Hardy, Daryl McCormack and Chris Walley, with a somewhat special priest played by Alec, will premiere directly on Movistar + on Monday 24 Baldwin.

To avenge her mother’s death, Pixie (Cooke) plans a perfect robbery, but something goes wrong and she must run away with a pair of hapless would-be criminals.

“MAFIA INC.”, A CAPOS THRILLER IN THE QUEBEC OF THE 90S

Daniel Grou, better known as Podz, directs this convulsive story based on the homonymous non-fiction novel by journalists André Cédilot and André Noël that delves into the world of organized crime in Montreal in the 90s and that Filmin premieres on Friday in its platform.

The plot revolves around Vince Gamache (Marc-André Grondin), the son of a modest tailor who dresses a family of Sicilian mobsters, the Paternos. His ambition leads him to strike a great blow behind the back of Frank Paterno (Sergio Castellitto), the godfather, which will make peace between the two great families of the city blow up. EFE