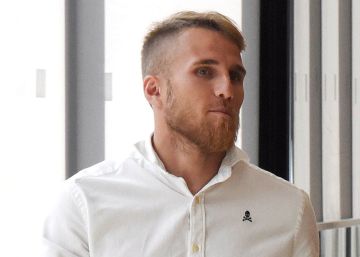 The roundest copy of the allegedly rigged party detected by the police in the Operation Oikos He passed this Wednesday by the court number 5 of Huesca, where the interrogations of Samu Sáiz, of Getafe until June 30, and Carlos Martín Briones, former player of Sariñena, made it look like a sheet of the Rorschach test. The test, which Hermann Rorschach began using in 1921 as a method for classifying personalities, presents patients with an ink stain and asks them what they see. In the messages included in the summary of the Oikos case, the police see that the Sariñena-Cariñena, of the Third Division, disputed on April 13, 2017, Holy Thursday, was an "affectation" that "was not fulfilled": 1 -0 final was not the agreed result. On the other hand, the presumed involved see very different things in these messages.

According to the police account, the chain of intercepted communications is the most complete of the three meetings that they identify as fixed (the other two are the Huesca-Nàstic of May 2018 and the Valladolid-Valencia of May 2019). The agents maintain that the messages imply the three steps in which they divide the plot: "leaders of the organization" (former journalists Raúl Bravo and Carlos Aranda, arrested on May 28, released on charges), "intermediaries" ( Íñigo López, arrested when he was a player of Deportivo de La Coruña, now released with charges, and Samu Sáiz, free with charges) and "corrupt targets" (Martín Briones, free with charges).

The attempted fixation supposedly was forged during the first days of April 2017. López and Sáiz played in SD Huesca, in Segunda, and Martín Briones, who lived in Sáiz's house, in Sariñena (Third), about 50 kilometers away. . "The chain of calls begins with the preparation of the match, in which Raúl Bravo interpellates Íñigo López to connect to the encrypted device," the summary reads. According to the police report, after López, he meets with Sáiz to tell him how it would be done and asks him to be accompanied by Martín Briones: "Tomorrow at 9 am, breakfast. Come with Mulato, I already have the bases of the tournament of the Call of Duty", He writes on April 7.

The agents say that "Mulato" is Martín Briones, but according to legal sources Martín Briones, who on Wednesday morning declared in the first place, tells the judge that he is not called Mulato, who is called Charly. Lasts few time. Right after, Saiz declares that, according to the same source, he identifies him as a Mulatto.

The following days López and Sáiz have breakfast together several times. The day before the match, the first one writes: "Tomorrow at 2 we will know everything. Tell him to get all the people he can to play a good tournament on-line". According to the agents, that would be the time of Bravo's last instructions. On the day of the game in the morning, Lopez writes to the ringleader: "Golfoooo, the tournament is already Fifa 17 for Holy Week".

The police maintain that with the tournaments, which go beyond Call of Duty to the Fifa 17, in fact they refer to the arrangement of the Sariñena-Cariñena. Martín Briones and Sáiz say that you can not see beyond the words. Explains Juan Gonzalo Ospina, of the law firm that represents them both: "The conversations are in reference to different videogames, tournaments in the Play Station", He says.

In any case, it goes wrong. "But do not fuck with me. I'm freaking out, uncle, "he writes that night, after the match, Sáiz a López, who replies:" Yeah, they're dumb, I told you so. But they are beginners. It goes and it does not come out. " From this exchange the police conclude: "The match was finally not made because of the corrupt players of the CD Sariñena". Aranda also finds out about the failure: "Those things are not done that way, listen to me. A lot of pasta is lost. He has lost a lot, uncle, "he writes to Lopez.

According to several conversations included in the summary, the failure causes a debt of 15,000 euros, which Lopez would have advanced and would have to return Sáiz (2,500), Briones (2,500) and three other players of Sariñena (2,500 each). Lopez would assume the rest. Those involved do not deny the debt, but they see different things in it.

On May 30, when the summary was still secret, without conversations on the table, the judge asked Íñigo López, then still detained. He said that it was about bets, but nothing to do with Sariñena-Cariñena: "(Mulato) tells me 'look, we want to make a bet on a series of games and the only thing that we do not have economy'. They wanted to make a stronger bet, 2,000 euros each or so. I tell them that I do it to them. They told me that if they win they gave me a percentage and if they lost they would replace me. I just think that I'm not going to make the bet because they will not pay me in case of losing. I decide not to do it, but I do not tell them anything. They effectively lose, "he said. He also said that he had been claiming the money from Briones for some time, even with threats ("as friends"), as shown in the summary.

This Wednesday Briones and Sáiz told the judge that the debt came from video games. "They were not bets as such, but investments in different tournaments on-line", explained Ospina. Here, too, there was a certain discrepancy. According to legal sources, before the judge they did not agree on whether the alleged tournament had been contested or not. In addition to that, it caught the attention of the magistrate, Ángel de Pedro, that the tournament was to take place at the same time as the Sariñena-Cariñena, in which Briones played the last minutes.

In any case, De Pedro, as he has done with other investigated, reduced the accusations of both raised by the police in their files of imputation: they withdrew the membership of criminal organization and kept them corruption between individuals.

After them, Borja Gomez, also accused, played a player from East Bengal who coincided with Aranda in Granada in 2012. The police say that the ringleader owes him money for a match. Gomez said that the debt revealed by the intervened conversations corresponded to a loan and the judge regretted that the evidence presented by the investigators was "weak." In addition, he announced that he would cancel the statements scheduled for next week (Carlos Caballero and Emilio Vega) while waiting for the overturning of the contents of the devices seized from the detainees to add new evidence.

Sevilla, to overcome the depression or enlarge the figure of Haaland and Dortmund