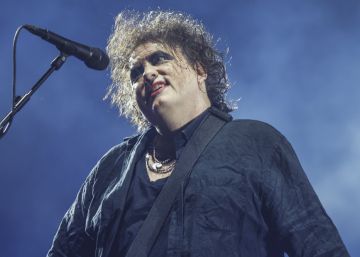 They once said The Jesus and Mary Chain, that Scottish band formed in the early eighties that was more punk than all the punk groups, that there is no group in history good enough to play live more than 20 minutes. The phrase is epatante and hyperbolic, but contains an important degree of truth. For more than many years, perhaps too many, Robert Smith has decided that the concerts of The Cure They will work by weight. Among that segment of the population that every time you go to a concert asks you how long it lasted, yours sweeps. The proposal continues to work, although it has huge cracks. In the hands of someone less clever, what The Cure put together on the closing day of the Mad Cool before the best entry of this edition, it would sink without remission. But the band knows what it does, it has done it a thousand times and it seems that it will repeat until the body and its fans hold up.

The first, apparently yesterday, will collapse before the second. His is a concert that, unlike other stage marathoners, such as Bruce Springsteen or Neil Young, is governed by many more risky codes. While Springsteen is sustained from the first topic, and Young tackles these games as if it were a play, chaining acts, Robert Smith is thrown into the void, delivering a first hour that is a fidelity test. It's like those novels where nothing happens until page 100. Apart from Pictures of You or Fascination Street, that start is held only among those who have been waiting up to seven hours for the band to come out in the first row – that is, the fans, who are many and loyal as they can not – and among tourists who know that this is the toll they must pay to be delivered in a while In Between Days Y Just Like Heaven.

That was exactly what happened last night. And it worked. Although it is inevitable to think what would happen yes to Robert Smith they will force him to eliminate an hour of his concerts. Would you do the hits or would I do the other? What is clear is that, whatever he did, it would sound just as good, just as greasy without ever looking automatic. In short, that dispatch what you want, but never stop doing A Forest, that is not only a barbarity of song, but that every year that passes is better.

For the encores, an almost criminal sequence of Friday I'm In Love, Close To Me, Why Can not I Be You Y Boys Do not Cry. Thus, neither the most skeptical, nor the one who yawned the most a couple of hours before, can leave unsatisfied. They call them headliners not only because of the repertoire they have, or the history they treasure, but because they are capable of things that in other bands would mean penalties and expulsion.

The good thing about knowing a bit about what's going a concert by The Cure is that it gives room for small breaks. Thus, it was necessary to approach the Community of Madrid stage to see The 1975 and compare Matthew Healy, the voice of this generation, with Robert Smith, the silence of the previous ones. With more audience than expected, the English, a mix between Supertramp and Kanye West, was much larger than the sum of their songs. Healy is a fascinating guy, who devoted himself between subject and theme to ask for wine and to remind us that we could stay a while longer to see him, because when his concert was over we would still see half an hour of The Cure. 80% of the audience gave the impression that they did not know who The Cure was. And all good with that.

The connection with the public was much more intense than with the headliners – it is called youth – and at times, the idea of ​​having to choose between them and those of Robert Smith reminded us of what should be in 1982 to be in a festival and having to decide if he was going to see those daring and cheeky young people called The Cure or, to say the least, the Rolling Stones playing the Rolling Stones. Again.

Before this overlap of almost metaphysical connotations, Mad Cool offered another more accidental. On the one hand Parquet Courts in a tent doing the work that The Strokes have resigned for years. On the other, Prophets Of Rage, the supergroup led by Chuck D of Public Enemy, Tom Morello of Rage Against The Machine and Dj Lord of Cypress Hill. Make rap rock political, something that until a few months ago was only interesting the third word. But tonight they were imperial. Aggressive Although the director who managed the screens was so enthralled with the look from Arab Sheikh dressed to go to a trap trap of Lord who forgot that beside him was a guy named Chuck D, responsible for the hip hop be what it is today and the revolution, even if it has not arrived, it can continue