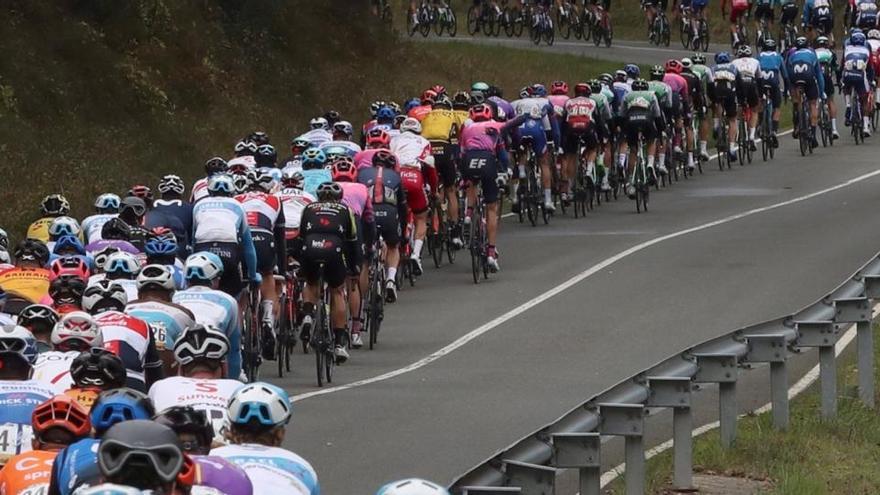 ‘The return de las catedrales’ was presented at the Forum of Evolution in Burgos with a tour offered in its 21 stages, eight finals up, 2 individual time trials, to open and close the round, and the main news of the high end in the Pico Villuercas, in Extremadura, and Alto del Gamoniteiro, in Asturias.

The 76th edition of the round will launch from Burgos with an 8 km time trial to commemorate the VIII Centenary of its World Heritage cathedral, and it will not end in Madrid, but in Santiago de Compostela, which celebrates its Xacobeo Year, and with another time that may be decisive of 33 kms.

Among the monuments 21 days that will add a total of 3,336 kilometers, where the mountain, the finals with attractions near the finish line and the unpublished ports will continue to mark the philosophy of the Vuelta, in search of innovation and sports entertainment until the last kilometer.

The organization has decided to return to Extremadura to put the end of the fourteenth stage in the Pico de Villuercas, and will present in society the Alto del Gamoniteiro, in Asturias, three days from the end. Two finds with the mark of becoming new benchmarks for the Vuelta.

La Vuelta 2021 keeps its typical incentives with hill arrivals that will add salt and pepper to the day to day. The Picón Blanco, the Montaña de Cullera or the Balcón de Alicante will arouse interest in the first third of the race, which also includes the return to Alto de Velefique, in Almeria, the mythical top of the Lakes of Covadonga and the terrible wall of Valdepeñas de Jaén.

The route of the Vuelta will surround almost the entire peninsula. It will be born in Castilla-León, it will cross Castilla La Mancha, the Valencian Community, Murcia, Andalusia, Extremadura, Cantabria, Asturias and Galicia.

The 76th edition will focus the maximum emotion in the last week with the Asturian mountain and the Compostela chrono, and will experience key days in the Sierra de Ávila with a day that will end in El Barraco, land of cyclists, such as Carlos Sastre and José María Jiménez, among others.

On the third day the party begins. After meeting the first red jersey in Ciudad del Cid and after the first sprint, Picón Blanco will be the first test with a high goal. A 9 km slope with ramps of up to 19 percent will reveal a secret. Figures such as Landa, “Supermán” López or Iván Sosa have been crowned there in the Vuelta a Burgos.

After two days of transition where the wind can give some displeasure, especially on the way to Albacete, the first week closes with two unpublished goals: the High Mountain of Cullera, with a final ascent of 1.5 kilometers, and the Balcón de Alicante, in the first stage of a real mountain, with 6 passes, 2 first.

Before the first rest day, the ninth stage will have as its highlight the ascent to Velefique (Almería), a day to suffer, with an accumulated unevenness of 4,500 meters and three staggered passes in the second half before the final climb of 13 kms .

After the rest, the stages through Andalusia are cited with the 21 percent ramp of Valdepeñas de Jaén, then with the concession to sprinters in Cordova and Villanueva de la Serena, already in Extremadura.

The fourteenth stage can clarify who are the candidates of the general. The stage between Don Benito to Pico de Villuercas will go down in history for hosting the first stage up high in Extremadura. From the town of Guadalupe to the top there are 15 kms with sections of 10 percent unevenness.

Before the decisive week, the Vuelta will wink at El Barraco, in Ávila, a town with a cycling school and the birthplace of champions, such as Carlos Sastre and the late José María Jiménez. A long mountain day, of 193 kilometers and 4 passes, including Mijares (1st) and San Juan de Navas with the summit 5 km from the finish line.

Lagos, the Gamoniteiro and the Santiago rejo, judges of La Vuelta

La Vuelta will rest for the second time to make the jump from Ávila to Cantabria. After the last sprint in Santa Cruz de Bezana, the seventeenth stage will climb to The Lakes of Covadonga, with an aperitif at the unpublished Collada Llamena.

The queen day will be the eighteenth between Salas and the new “Altu D’El Gamoniteiru”, the jewel of the 76th edition, chosen as Alberto Fernández’s summit. A 15 km port that does not fall below 10 percent on average. As if that were not enough, it will be preceded by the climbs to San Lorenzo (1st), La Cobertoria (1st) and El Cordal (2nd). It will be the last chance for climbers.

From Asturias to Galicia, will remain three stages not exempt of interest. The first in Monforte de Lemos with a demanding medium mountain, the second between Xanxenxo and Mos, which will be a kind of small “Liège” with 5 levels and the final with the timed between Padrón and Santiago. It will be 33.7 kilometers, possibly decisive.