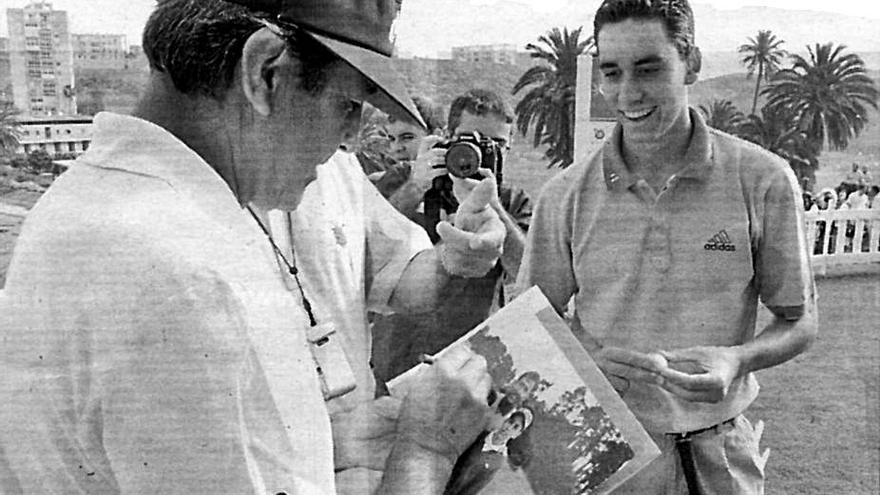 From Severiano to Rafa

The best Spanish golfers in history have left their mark on the three opportunities that a European Circuit tournament has had in Gran Canaria. Myths such as the now-defunct Severiano Ballesteros or Txema Olazabal, still active, served as pioneers in the 90s. Sergio García took over at the beginning of this century and, now that the fourth time that continental tour lands on the island , a professional player from Gran Canaria will try to continue with that successful trajectory.

Rafa Cabrera Bello is one of the great attractions of the Gran Canaria Lopesan Open, which starts tomorrow at Meloneras Golf with a very attractive line-up. Who was going to tell the island golfer that almost 20 years later he would capture all the eyes in his territory; in 2002, when Sergio García achieved his first professional victory, Rafa finished fourth while still being an amateur.

The history of the European Circuit in Gran Canaria began at the beginning of February 1995. The Maspalomas field hosted the Turespaña Open de Canarias, valid for the continental competition. The great Severiano Ballesteros, the best Spanish golfer of all time, led the national army. And, of course, he left samples of his enormous class fighting for victory until the end.

I could not do it. The Cantabrian had to settle for second place, tied with Britain’s Paul Eales. Both were within a stroke of Jarmo Sandelin, who conquered the victory. In this tournament there was also representation from Gran Canaria, and also playing a great role. The islander Pedro Linhart became the second best Spanish player, conquering the ninth position of the final classification.

We did not have to wait long to experience the second visit of the European Tour to Gran Canaria. It happened in 1997. Maspalomas repeated as the setting for the Turespana Masters Open de Canarias, at the end of March.

This time without Severiano Ballestero, Txema Olazabal took the baton from the Spanish army. The Gipuzkoan golfer dominated the classification on that occasion. He won the tournament with two strokes of advantage over the English Lee Westwood and three over the also British Paul Broadhurst, second and third. Also on this occasion the local Pedro Linhart participated, but this time he could not repeat the brilliant performance of two years ago and did not pass the cut.

To witness the third European Tour tournament in Gran Canaria, we had to wait longer this time. The continental contest did not return to the Island until well into the 21st century. It happened in 2002. The field of El Cortijo acted as host, at the end of April, of the Canarias Open de España.

And, again, Spanish protagonism, which experienced a historical milestone. A young Sergio García, at that precocious star of national golf, obtained his first victory as a professional player. The Castellón, already confirmed as one of the greats of this sport worldwide, laid the first stone of his successful record in the Gran Canaria facility.

Sergio García accumulated 275 strokes (13 under par) throughout the four days of competition, enough to surpass the rest of his qualified rivals, among which he stood out, apart from the Italian Emanuele Canonica –second in the end with 279 strokes– and the Englishman Greg Owen – third with 280 -, a young amateur golfer from the land who was beginning to show his great gifts for this sport, and who had already won the Spanish Championships in all categories (youngest, juvenile, infantile, cadet and sub 18).

We refer to Rafael Cabrera Bello, who finished fourth in the standings. Crouching down, suffering the ups and downs of a performance in which he combined mistakes and successes, the 17-year-old could even climb a few more steps in the classification if he did not mediate two inopportune errors in the last two holes.

In that tournament, the islander made his name sound for the first time in the international golf bullshit. Now, almost 20 years later, he reaches the fourth round of the European Tour that takes place in Gran Canaria fully consolidated among the elite and with three titles in the continental competition.

Without a doubt, an emotional story for this sport. Rafa, as one of the most important names on the Gran Canaria Lopesan Open poster that starts tomorrow, intends to continue the Spanish streak in the Tour tournaments held in Gran Canaria, and take revenge from that 2002 that left such a good aftertaste .

The presence of the European Circuit in Gran Canaria has allowed us to see the greats of Spanish golf in action. Sergio García, in the upper left image, achieved his first victory as a professional player at El Cortijo. Txema Olazabal, in the photo above these lines, won Maspalomas in 1997. On the left, Severiano Ballesteros signs an autograph for a young Rafa Cabrera Bello in the El Cortijo test in 2002, where the Gran Canaria player was still fourth. amateur