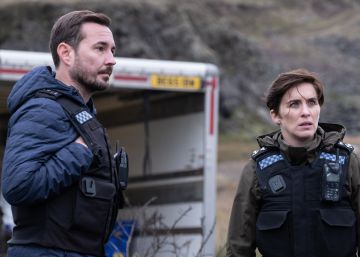 One of the most watched series this year in the UK has been, again, Line of Duty, a police drama about corruption in English law enforcement. Fiction, which is already in its fifth season, is a veteran pretty girl of British criticism. But a powerful detractor has just emerged: Cressida Dick, curator of the London Metropolitan Police, that is, director of Scotland Yard. "I am outraged by the extreme degree of corruption that is shown as a police routine in 2019. It is so far from reality," Dick said this week in an interview with Radio Times, the weekly radio and programming magazine of the BBC.

Dick criticizes in the same interview Bodyguard, another creation by the author of Line of Duty, the screenwriter Jed Mercury. Bodyguard It was one of the great television phenomena of last year worldwide. In England it became the most watched fiction on the BBC in 16 years, with 17.1 million viewers in its sixth and final episode, numbers reserved for a World Cup. “I had to turn it off after 20 minutes,” says Dick. "The moment when the secretary of the Interior seduces her bodyguard surpassed me, I fear to say."

Mercury, famous for making dramas as tense as not plausible, has already had to defend itself on other occasions from criticism of institutions. "They are television dramas about police departments that don't exist," he said in 2016.

That unexpectedly high institutions comment on television series was unusual until this year. As the audience of the platforms grows, the influence of fictions with load, or at least political appearance, gains strength; before them, a massive phenomenon, the size of The Simpson in the early nineties, so that a politician dared to talk about her. In 1992, then President George Bush said in a speech that American families "should behave more like the Waltons [a well-intentioned telecomedy] and less like the Simpsons." In 2019, in Israel, the Prime Minister, Benjamin Netanyahu, he asked his followers days ago to boycott Our boys, which chronicles the kidnapping and murder of a young Palestinian.

Meanwhile, the international success ofChernobyl irritated the Kremlin. In June, the state-owned Russia TV network, which had been criticizing production for a few weeks, announced that it would make its own version on the same issue. Russia is famous for use the series for propagandaIn February, numerous intellectuals criticized the biased version of Lenin's biography that had been sold to Netflix. The series continue to count within the call soft power but as their reach grows, they are increasingly more power.