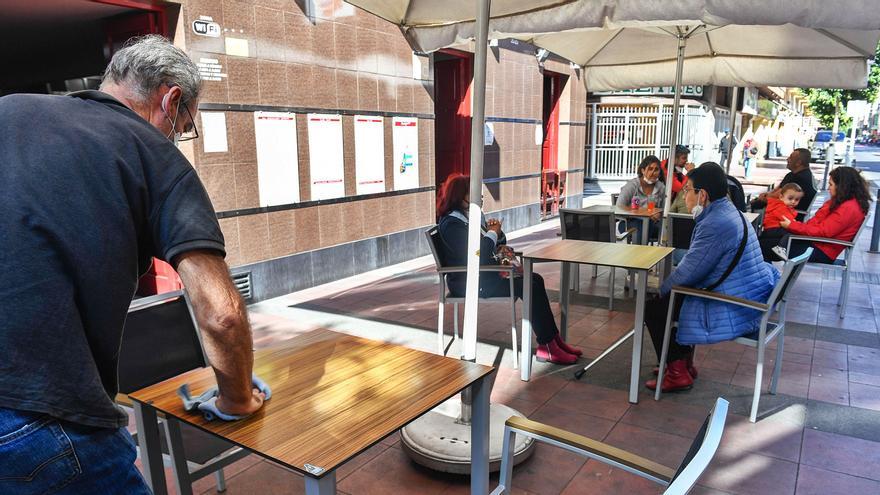 From resignation to restlessness

Alert level 3 that comes into force today in Gran Canaria to tackle the growing incidence of coronavirus forces the interior of hospitality establishments to be closed and to limit the capacity of the terraces to 50% of their usual capacity. The owners of bars, restaurants and cafes have again spent a weekend reviewing the official bulletins and preparing for the changes with sometimes mixed feelings. Behind the bars and on the stove, these days there is a mixture of resignation to the health emergency and concern for an immediate future that is as uncertain as the epidemiological evolution of the pandemic itself.

“I can’t fit any more flags, I just need the final thrust,” ironizes Víctor Rodríguez, owner of La Eminencia, along with his brother, on Fernando Guanarteme street in Las Palmas de Gran Canaria. The pandemic has affected this historic bar-cafeteria -it has been open since 1950- with the loss of elderly customers who used to take food home and are now kept more secluded – “Less and less come,” laments the hotelier- But their long hours, between six in the morning and ten at night, have allowed them to maintain a certain cash flow.

The new level of alert entails the closure of the interior of the premises, so its three terrace tables will become its main source of income for the next two weeks, although they will also be somewhat diminished by the reduction in capacity. “We will be able to keep 50%,” he explains while calculating the customers that could fit before.

Despite the damage they may do to the business over the next 14 days, Rodríguez regrets that the restrictions did not come before the epidemiological situation soared: “Save Christmas, what is that? Save us! Christmas will come, the important thing is not to have such a bad time ”. After saying it, he stops for a moment and points to the street, emptier than usual, before continuing: “Look how he is today [por el domingo]There are usually quite a lot of people here … I saw it coming in some way: I knew we were not special, nor are we the island where nothing ever happens ”.

Javier Pérez, who has been giving breakfast to half the neighborhood in the nearby Guanarteme churreria all morning, also recognizes himself “a little resigned” to the changes that the closure of the interior represents for his business. Even so, “if it is a matter of morality with everyone, you cannot be neither more nor less than anyone, it is an order and you have to abide by it,” he adds.

During this time of pandemic, Pérez has had to reduce the number of tables on the terrace to adapt to the rules, but regrets, like several of the hoteliers consulted, the lack of collaboration is shown by some clients: “I reduce, but yes one comes and puts a chair and is joining the other’s back and they can punish you, “he explains. In any case, when the police have approached his establishment “they have been very polite saying how things have to be organized,” he assures. ”

The three tables on the terrace that he now has will probably be reduced to two, but despite the reduction in income, he claims to have no problem with the reduction in capacity: “It is true that the economy is shrinking and you are going to earn even less than before” , he assumes, “but if we can pull and hold on, we have to do it: this is a health issue and we have to do our part”.

Like Pérez, the head of the La Terminal bar on Joaquín Costa Street, Rubén Calafate, assumes the limitations with resignation, “because this must be stopped”, but advocates a direct solution: “I would close everything down, not patch, or is it that people are not going to hang out at home with colleagues? ”he wonders.

Although his establishment has a large terrace that has allowed them to mitigate the effects of the pandemic, he acknowledges that the situation is “extremely tough” for the results. The decision on the future of the workers has not yet been made, but it does not rule out having to do without the people who joined to reinforce during the holidays: “Since the curfew is in, we have three hours less billing and it shows, and now another one is added ”.

Anguish increases in the hospitality industry when establishments do not have a terrace. That is the case of Bululú, a charming Venezuelan restaurant on Venezuela Street whose fame has grown in recent years among the gourmands of the city, but as of today it will have to limit itself to taking orders at home. The concern at this time is the immediate future of the accounts: “On Wednesday we have to pay the quarter yes or yes, because that does not stop,” recalls one of her partners, Mónica Emmi. “That yes they do not stop it, like the malls”, criticizes.

With the gate in place, their only source of income from today will be the orders that arrive through the platforms, but the model of home delivery through large companies is not particularly profitable for small establishments, which have to pay a portion of the price of the dishes that can reach 30%. “We always use it,” says Emmi, “but we are small and we do not have our own delivery, we have to resort to those that exist.”

Home delivery is not even an option for Víctor Martín, owner of the Capricci cafeteria on Kant Street. They give breakfast every day to the staff of the offices and nearby shops, but the impossibility of serving their customers inside the premises means that a few hours before the start of level 3 I still do not know how to face this Monday: “I still have to see if I prepare sandwiches, because I don’t know if someone will come to buy them to go and I can’t be at a loss ”.

At the moment, his main occupation is to organize the interior of the premises again and focus it on take-away products: “We are enabling this, because since you cannot go to the bathroom, we will put the ice cream machine there,” he indicates, pointing to the place where customers accessed the premises until now.

Although it serves many coffees and breakfasts, Martín’s authentic specialty is the Uruguayan polvito cakes, chocolate and cookies or nougat that he prepares in an artisanal way on the premises. Their elaborations are demanded by other hospitality establishments that now, before the smaller number of clients, put their own workers to prepare them, so it is doubly affected in the income. Their great hope is that the number of people who take them home to indulge themselves will increase. That, and “that level 3 is only 14 days, because if they don’t kill me, that this month is also taxes.”