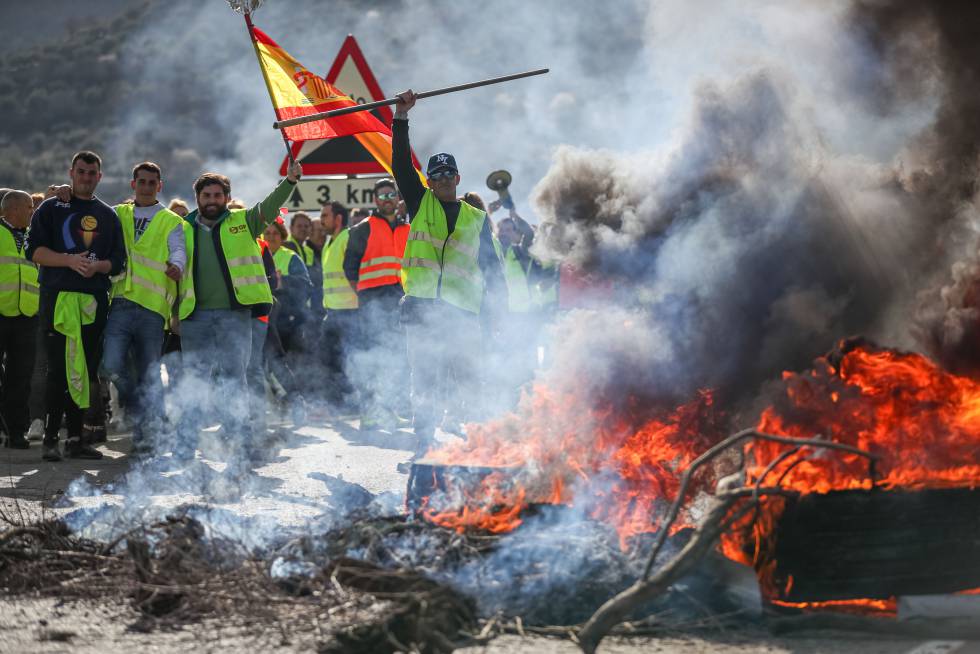 A group of farmers destroyed 10,000 vines in a vineyard in Alicante last Wednesday. It was not a vandalism, but the emblem of the tiredness that has been lived in the farms of half of Spain due to the lack of profitability of the cultivated.

Castile and Leon, Andalusia and Extremadura have become in the last days the epicenter of the mobilizations of farmers and farmers. Their protests have spread throughout the peninsula since last January 17 the main organizations of the sector (Handle, COAG Y UPA) will be called out “in defense of their future.” Next week they will demonstrate in Madrid.

Why protest the Spanish countryside? Why do you do it now? Motifs that come from afar, global junctures and the latest decisions of the Government are mixed.

Changes in sight. In the world and in Spain, external climatic events, changes in eating habits and new trade agreements will change the scenario of the agricultural sector. This means less profitability in products and the need for new policies and measures, as recently pointed out by both FAO (Food and Agriculture Organization of the United Nations) and the Ministry of Agriculture, Fisheries and Food.

Prices down. Very low amounts are paid for the products of farmers and ranchers. And the current collection campaign is the third followed in which prices they go down even more than normal Milk, oil, red pepper and beef and veal have had a similar downward evolution.

In the case of oil, the surplus of recent years led to a decrease in prices. The prices were so low that they barely covered production costs. That is why last November the European money used to finance private oil storage was unlocked for the first time since 2012. The goal is to save the product until supply and demand are compensated again and prices improve. Some producers report that this will only partially alleviate the problem, which is being aggravated by speculation and the importation of oil from other countries: foreign trade data confirm that Spain imports 1.5 times more olive oil today than a decade ago

The biggest problem is that the two prices do not evolve at the same time. It is what has happened with the navel orange (the most common): since January 2018, the destination price has risen 1.3% and the origin price has fallen 11%.

Production costs. Fuel, electricity, fertilizers or feed are essential costs in any agricultural process. And all of them have become more expensive. The price of diesel was placed at the close of 2019 in highs since 2015 and its price continues to rise since December this year.

Farm income. A key indicator of the health status of the sector is agricultural income, which is the economic value generated by agricultural production (taking into account all its costs). After years on the rise, in the last year it has dropped 9.5%. It is the biggest fall since the economic crisis.

The Minister of Agriculture, Fisheries and Food, Luis Planas, denies that the fall has to do with increases in the minimum wage in 2019, as the large organizations in the sector believe. The minister, in an interview on the SER chain, has blamed the fall rather than the fall of agricultural employment, the temporality or the dry months of 2019.

Minimum salary. The rise of the minimum interprofessional salary of 2019 he already met the agricultural sector resistance. Fruit and vegetable producers pay mostly for hours. According to their agreement, laborers work six hours a day and not eight, something that with current prices places them below the minimum wage (in other crops such as olive groves or vineyards it is more common to find wages above the SMI). The calculations of the associations of the sector calculate between 40% and 50% the increase in labor costs after the last increases in the minimum wage.

The reality is that the minimum wage and the field do not get along. In Spain, it is the sector with the lowest declared salaries (data from the Treasury) and where there are fewer workers, 62%, according to EPA data. As they underline several studies, these characteristics and the abundance of small and medium enterprises make it the most difficult sector to adjust to minimum wage increases.

Home competition. Barriers to imports and exports are having direct repercussions. The Russian veto to EU products has caused that three times less fruits, vegetables and legumes are exported to that country compared to 2014 (from 234 to 79 million euros per year). The tariffs of the president of the United States, Donald Trump, meanwhile, have weighed the prices of table olives.

Changes in export flows are also occurring due to the search for cheaper products. And not only in Spain: France has gone from importing 735 annual tons of citrus from Spain in 2015 to 630 of 2018, while in the last year it has multiplied by two those imported from South Africa.

Lemons and oranges are a good example to see that Spanish buyers are also importing more and more products from other countries such as South Africa, Argentina, Portugal or Morocco.

Given this scenario, the increased competition That could mean the trade agreement between the EU and Mercosur.

The little big help of the CAP. The new Common Agricultural Policy (CAP) plan foresees a 13% reduction in direct aid to farmers and proposes to increase those that go to the development of rural territory. Although the new distribution would take effect in 2022, farmers see the model followed so far in danger. “Cereal producers in Spain sell below production cost for 15 years. So their products are cheap. Without the funds, they could not survive selling at that price,” summarizes Arturo Serrano, of the Agricultural Association of Young Farmers ( HANDLE).

The CAP distributes a lot of money and the beneficiaries are also many. In the 2014-2020 period there were more than 5,000 million euros in direct aid to Spanish farmers and ranchers (an amount similar to the one-year budget for Education in a community like Madrid), but 74% of the beneficiaries received less than 5,000 euros; 1.7% of them, more than 50,000, according to data from the European Parliament.

Insurance. Farm insurance varies by type of crop. 83% of the cultivated has insurance on farms; in the vineyards, 70%. Although there is no detailed data, farmers regret that in most cases state insurance ensures a little more than half of the real value of a crop. For that reason, they are asking for a greater contribution from the Government to the money exchange that finances this item.

The weather, which makes insurance more necessary, does not help. The hail days in 2018 have been 274, while in the previous two years they had stayed at less than 170. Added to the biggest storms and more frequent floods, as a result of climate change, they mean more complications for farmers.