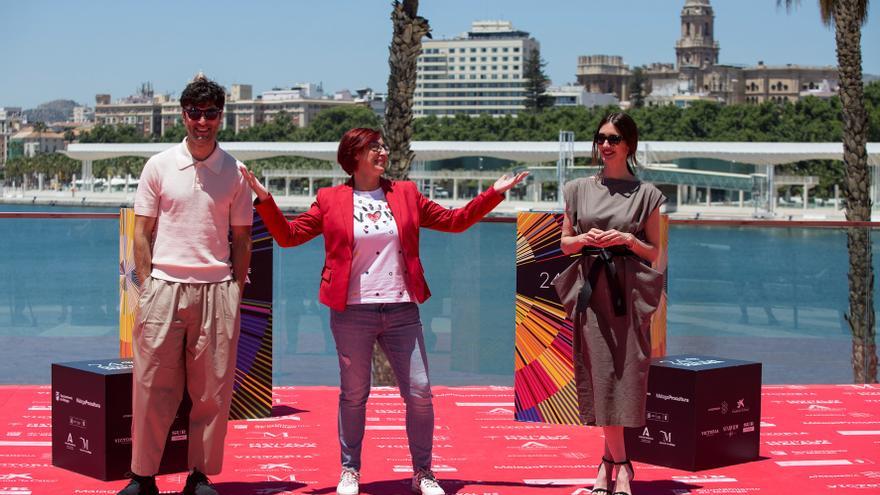 Madrid, Jun 10 (EFE) .- Paz Vega and Javier Rey in charge of a mystery thriller set in a town in Malaga, "La casa del caracol", and the directorial debut of actress Robin Wright, "En un lugar wild ", are the main novelties of the card this weekend.

On platforms, "Possesor Uncut", the winner of the last Sitges Festival (Movistar +), the Danish thriller "Wildland" (Filmin) or the family animation film "Wish dragon" (Netflix) will be released.

Robin Wright makes her directorial debut and also stars in this story of a woman who seeks meaning in her existence by facing life in the wild.

After a great tragedy, Edee (Robin Wright) feels unable to connect with the world she knew and decides to retire to the Rocky Mountains. About to die and after being rescued by a local hunter (Demián Bichir), Edee must learn to live again.

Javier Rey, Paz Vega and Carlos Alcántara star in this debut feature by Macarena Astorga, a psychological thriller based on the novel by Sandra García Nieto about a writer who spends the summer in a town in search of tranquility and inspiration but discovers that the locals keep many disturbing secrets.

Ava Salazar, daughter of Paz Vega, makes her film debut in this film, along with interpreters such as Norma Martínez, Pedro Casablanc, Elvira Mínguez, Vicente Vergara and Luna Fulgencio.

"ONCE ONLY", MALE VIOLENCE WITHOUT STEREOTYPES

Based on a play by Marta Buchaca ("Litus"), "Solo una vez" flees from the cliché that mistreatment only affects low-class or uneducated people through the story of a writer and an editor who does not they recognize what is happening to them.

Ariadna Gil plays Laura, a psychologist specializing in gender violence who must treat that couple, played by Álex García and Silvia Alonso, and at the same time she is harassed by the husband of another of her patients.

"LA VIOLINISTA", A ROMANTIC AND MUSICAL DRAMA FROM FINLAND

"La violinista" is a romantic story about ambition and the renunciation of personal dreams. Karin is a violinist who is forced to end her career due to an accident and redirects her life as a music teacher when a young student will bring out feelings and emotions that she thought she had forgotten.

It is written and directed by the Finnish Paavo Westerberg, also an actor and screenwriter of titles such as "Frozen Land" (2005) and "Frozen City" (2006).

The director of "Campeones" returns to his most thuggish origins with this film that mixes the everyday and the extraordinary and has a cast of little-known names such as Chani Martín, Laura Gómez-La Cueva, Janick, Alberto Castrillo-Ferrer, Pol López and Fernando San Segundo.

This documentary from the European Dreams Factory - a distributor specializing in religious cinema and "with positive values" - brings together several pro-life stories in extremely difficult circumstances.

A tetraplegic painter, the founder of a home for abandoned and disabled children, a surfer who lost his hands in an accident or the mother of a girl with Down syndrome are some of its protagonists.

Ida moves in with her aunt and cousins ​​after her mother's tragic death in a car accident. The home is full of love, but outside the doors the family leads a violent and criminal life.

Nominated for the European Film Awards (EFA), "Wildland" marks the debut of the Danish Jeanette Nordahl, a thriller dominated by an ever-increasing tension, which revolves around the need for belonging and family dependence. It premieres on Filmin.

Son of David Cronenberg, Brandon Cronenberg was the great winner of the last Sitges Film Festival with the awards for best film and best director with this disturbing and violent science fiction film about an elite murderer who, using brain implant technology, takes controlling the bodies of other people to do their job.

It opens this Thursday on Movistar + with a cast led by Andrea Riseborough, Christopher Abbott, Jennifer Jason Leigh and Sean Bean.

Netflix premieres this family film from Sony Pictures Animation that tells the story of Din, a college student from a humble family, with many dreams but few means, and Long, a cynical but all-powerful dragon capable of granting wishes.

Together they set out on an adventure in present-day Shanghai to find Lina, Din's long-lost childhood friend, a journey that forces them to confront some of life's big questions.