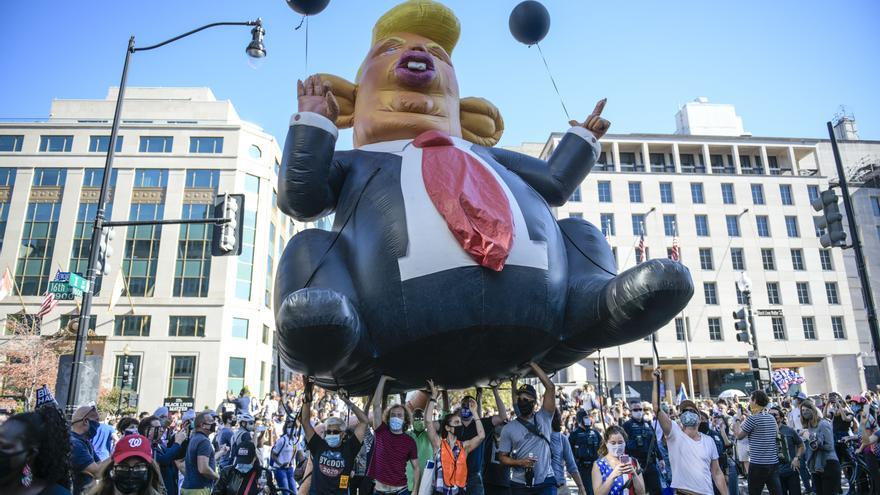 The streets of large American cities have received with shouts of joy, honks, firecrackers and improvised marches the confirmation of the Democratic candidate, Joe Biden, as the next president of the country, thus ending four days of agony over the vote count. Washington, with a Democratic majority, lives overturned in politics, so the minute after the end of Donald Trump’s Presidency was known, its citizens took to the streets. In the plaza of Columbia Heights, a neighborhood with a strong Latino presence, passersby have gathered to clap and dance under a splendid autumn day. In the vicinity of the heavily fenced White House, a river of people and cars gathered to celebrate the end of Trump’s presidency.

In New York, which already had started celebrating Biden’s win before it was confirmedHundreds of people have gathered in the central Times Square to shout and celebrate the result after it was learned that Biden had won the 20 votes of the Electoral College of the state of Pennsylvania. New Yorkers, who in many cases have been demonstrating against Trump for months, their resistance to criticizing the ultra-rightists, to addressing the need to confront racism or against their intention not to recognize the result of the elections, have broken days of waiting with dances and songs in a catharsis that marks a before and after in a very difficult year 2020 for the city.

Meanwhile, in Miami, the “Florida for Biden” posters replaced those of “Cubans for Trump” in the emblematic Freedom Tower, in the center of the city, on a rainy day and awaiting the effects of the tropical storm Eta in South Florida. The Freedom Tower centered the party of the Democrats in Miami-Dade, the most populous county in Florida and historically inclined towards that party, after the frustration they caused Biden’s poor performance in Florida compared to former Secretary of State Hillary Clinton four years ago.