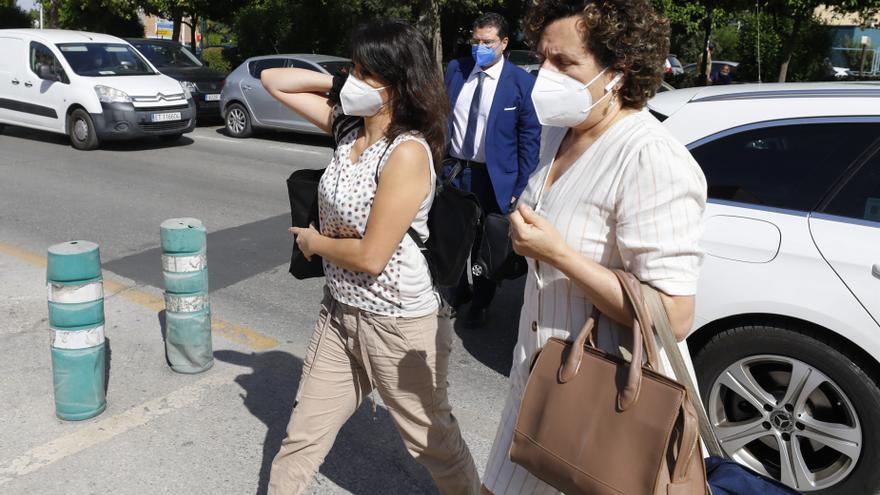 From Juana Rivas to María Sevilla, in recent years several cases of mothers who, for a period of time, disappeared with their children after the judicial system did not respond to their complaints of sexist violence or sexual abuse. These mothers, at least in the cases of Rivas and Seville, with enormous media coverage, have ended up convicted of a crime of child abduction that has involved their entry into prison and the deprivation of parental authority for several years. However, from magistrates of the Supreme Court to the court prosecutor against violence against women, Teresa Peramato, passing through different feminist associations and jurists, they underline the need to rethink and apply this crime with a gender perspective.

At the beginning of February, 168 feminist collectives they demanded pardon total and urgent for María Sevilla, the former president of Infancia Libre sentenced to two years and four months in prison for a crime of child abduction and the loss of parental authority for four years. Seville, as confirmed by prison sources to elDiario.es, entered prison on Monday after the judge denied him the suspension of his sentence until there was a decision on his pardon.

The woman was convicted of failing to comply with a sentence that granted custody to the father of her son after remaining unaccounted for with the minor since the beginning of 2017. From the beginning, Sevilla has accused the father on several occasions of sexual abuse towards the child and had fighting a legal battle for several months, but the only complaint that prospered was filed, despite the numerous documentation with reports from doctors and experts that he provided. In March 2019 she was arrested.

A few weeks ago, the court prosecutor against violence against women, Teresa Peramato, asked prosecutors to investigate whether, in cases of child abduction by the mother, women have acted in a context of sexist violence. Although today this crime implies "without exception" the penalty of removal of minors, the prosecutor stresses that it is necessary to apply the gender perspective to the investigation to analyze the possibility of applying extenuating circumstances. She also recalled the obligation to listen to minors in this type of procedure.

The numbers confirm his statement. The data from the Central Registry of Prisoners and Rebels, with which the INE prepares a statistic that is later disseminated by the General Council of the Judiciary, show that the abduction of minors is the only crime committed in the family sphere in which the convicted persons are Almost equally, men and women. For example, in 2013 (the first year it was counted) 32 people were convicted: 17 men and 15 women. The proportions are similar in all the years of the statistical series. 2018 was the year with the most convictions, 41, and also with the most gender imbalance: 14 men and 27 women.

The courtroom prosecutor insisted on the need to determine "the incidence of gender-based violence in the abduction and give the legal response that is fairest and most appropriate, with the application, where appropriate, of the complete or incomplete defense circumstances that are applicable." The Hague Conference itself - the international treaty that in these cases includes the immediate return of minors -, he explained, is studying how to assess incidents of gender and domestic violence in international child abduction procedures.

María Ángeles Jaime de Pablo, president of the Themis Jurists Association, stresses that the crime of child abduction is applied "indiscriminately" to situations that are in fact very varied and not of the same seriousness. "There may be occasions when authorization has not been obtained from the other parent for a change of residence but there is no purpose of impediment to the relationship with the minor. In other cases, it may be due to a serious situation, in which that relationship is unfairly prevented," he explains. De Pablo emphasizes that in cases where there are non-consensual changes of address, it is necessary to find out if there is a greater good, for example, trying to avoid a risk to the physical or mental health of minors or women, such as being exposed to any situation of violence.

"In the case of María Sevilla, it has gone a step further. The filing of a complaint is not equivalent to a non-existence of the fact. The law has provided for the possibility of suspending visits without judicial recognition, either because there has been no complaint or because the process has ended with a file. Indicators of this violence can be collected even if the resolution has not been favorable or there has been no procedure. The usual dynamic has been the dismissal of many complaints even though there were indicators that pointed to a situation of violence, but in a criminal trial the principle of reasonable doubt was applied and the matter ends in acquittal or filing, which may even be motivated by the waiver of some family members not to testify," says the lawyer. The jurist advocates promoting a legal practice that addresses these indicators of violence "regardless of the outcome of the criminal process."

Child abduction represents a minimal percentage of crimes against family relationships. In 2019, the year before the pandemic, there were 5,821 such convictions. Of these, 5,749 were due to family abandonment, for example for not paying alimony. In this case, 91% of those who were convicted were men.

Juana Rivas, who in 2017 held her children for a month so as not to hand them over to their father, whom she accused of mistreatment, was sentenced in the first instance to five years in prison and six years without parental authority. The Supreme Court later reduced that prison sentence to two and a half years. Her crime was also child abduction. In the summer of 2017, Rivas was unaccounted for a month with her two children so as not to hand them over to her ex-husband, Francesco Arcuri, who had been convicted in 2009 of gender-based violence and whom she had accused again . Maracena's wife subsequently filed several complaints against Arcuri for abuse of her youngest son, but all were filed by the Italian justice system.

In the mandatory report that the Second Chamber of the Supreme Court made on the pardon of Juana Rivas, eight magistrates were in favor of granting her a partial pardon. Among their arguments, the magistrates review how the judgments of the European Court of Human Rights try to combine, with difficulties, what is established in the Hague Convention with the principle of the best interests of the minor.

Contrary to what was happening at the time the Hague Convention was drafted, where the sociological stereotype of the kidnapping parent was the foreign father who had no custody rights, was reluctant to accept custody of the child from the mother and displaced to the minor from their country of habitual residence; since the end of the century, it has happened that the majority of kidnapping parents are now foreign mothers with custody rights who, for multiple reasons or motives, leave the country of habitual residence of the family after breaking up with the father of the child," they said in their report.

The magistrates speak of the fact that the child's anguish report –in the case of Juana Rivas– and the existence of a situation of violence is essential to optimally apply the best interests of the minor, "which, as the Constitutional Court explains, is the consideration to which all measures concerning minors taken by public or private social welfare institutions, courts, administrative authorities or legislative bodies must attend. As detailed by the United Nations Committee on the Rights of the Child, they recalled in their letter, the interest of the child is a dynamic concept "that must be properly evaluated in each context."

Last December, several United Nations rapporteurs – the special rapporteur on violence against women, her counterpart for the right to physical and mental health, the rapporteur on torture and members of the UN Working Group on Discrimination against Women and Girls– issued a statement in which they were very harsh with the Spanish judicial system, which they accused of not sufficiently protecting minors from "abusive parents". They also pointed out that there is a "discriminatory bias" that makes the testimony of women be perceived as less credible than that of men, even with evidence of having suffered abuse.

"Even in cases where there is a history of domestic violence or evidence of maltreatment, court decisions often favor fathers, even in those cases where there are reasonable grounds to suspect that they abuse children and their mothers" , they were saying. The rapporteurs urged Spain to do more to ensure that its legislation is applied and to take effective measures to avoid these cases.

Then, a group of women called 'Protecting Mothers', who had sent their cases to the UN, underlined the violation of the rights of their daughters and sons: "Right now there are a large number of creatures who are unprotected and we, their mothers, we are being ignored and discriminated against for trying to protect them from sexual, physical and psychological violence. Their human rights are being violated, living a severe degree of suffering and pain, since they are forced to live with their alleged abusers, preventing their right to a life free of violence. These girls and boys are not listened to, they are prevented from having contact with their mothers and their best interests are not taken into account".