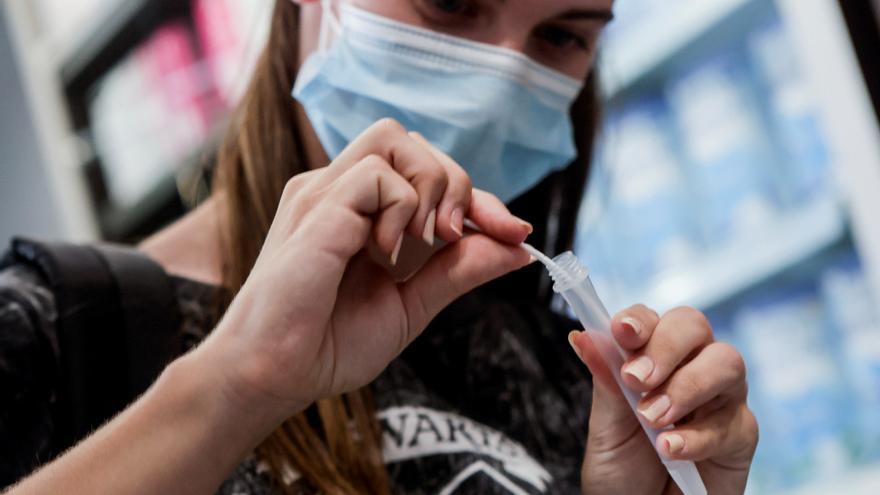 When the two lines of the antigen test "lit up", Daniel locked himself in his house. The next day, he called the Community of Madrid's coronavirus information phone and they explained that, since it was Saturday, his health center would not contact him until Monday. Nobody called on Monday and not on Tuesday either, so he called again. He got the same answer: to wait for his GP to tell him something. In the absence of responses, the 33-year-old architect began his own protocol: 10-day isolation, notices to his recent close contacts, and waiting for symptoms to subside.

The arrival of the omicron variant and the explosion of the sixth wave have changed the plans of many in the run-up to this Christmas, which was expected to be quiet. Vaccination places us in a different context than last year, but the scenario is once again marked by the rebound in infections. This time with no restrictions in sight and with an oversaturated Primary Care that puts a good part of what has to do with COVID-19 in the hands of the citizens: from taking an antigen test in the living room of a shared apartment in the face of the sanitary collapse, to opting for preventive isolation to reach Christmas Eve without getting infected or claiming that the company allows teleworking.

Daniel took the pharmacy test because he had had a "runny nose and sneezing" for several days and because he began to feel very tired. In his case, no one warned him that it was close contact. "I, inside the bad, I have spoken with my bosses and they have told me to do what I can, not to worry. But right now I am at home and my work is on site. I do not have a leave that justifies having stayed here, it is not in sight that I can get one, "he protests.

As he explains, he will quarantine for ten days following the protocol of his community. "I also looked to make an appointment, because the COVID-19 information phone is not useful for much, but the first available date is December 30 with the nurse, and with doctors they go to January," he laments. Given the lack of public health care, many people turn to private laboratories, but not everyone can afford it: "I am not considering going to have a PCR to spend my money. I count on that I have it, it is It's a bummer to stay at home, but when in doubt I prefer not to put anyone at risk. "

Daniel's is one of the positives that are being left off the radar, without appearing in the official statistics that the Ministry of Health reports every day and that still exceed 700 cases per 100,000 inhabitants. The explosion of the sixth wave has caught Primary Care, on which a good part of the management of the pandemic falls, very weakened and with saturated toilets. "The sixth wave is filling the waiting rooms of health centers and the COVID-19 management units are underfunded, overflowing and overloaded," said Mar Noguerol, director of a health center in Madrid, a few days ago.

In some communities, for those who have been infected to get an official test is a real odyssey, so for many only the home diagnosis remains, which is complicated by the lack of antigen tests in pharmacies. The Community of Madrid has gone even further and has practically made the self-diagnosis official announcing that it will stop doing PCR to those who give positive in the pharmacy test.

It is also being complicated contact tracing, a key task to stop the spread of the virus, has fallen on the side of self-management due to the lack of reinforcement of the workforce and despite the fact that experts have been warning of the importance of having a tracking system since the beginning of the pandemic strong. It is often the infected people themselves who are notifying those with whom they were without a mask for more than 15 minutes, that they must begin the journey of trying to get an appointment at a health center on their own.

Beyond the health field, many companies have returned to the virtual modality before the rise of infections, at least until the return of the Christmas holidays but, since the accelerated escalation of cases began, there has not been a clear and uniform guideline either, so it has depended on the will of the companies. Quino, who works in the banking sector, explains that since last year he had already teleworked half the time, but with the rebound in incidence, this Monday the 20th the company informed them that whoever wanted to, could stay at home.

"Every month they send us how the situation is with regard to COVID-19 in the company and if measures are going to be changed," he says. "On the 20th they sent us an email at around five in the afternoon telling us that from the 21st it was possible to work 100% remotely, that the offices were there for whoever wanted to go, but it was voluntary." This engineer, three days before Christmas Eve and with a small child in charge, has decided to stay home. "This will be until further notice. I imagine that until the new wave passes. We had a week in which 50% of the team was already confined by contact with positives. It was logical that this would happen," adds Quino.

However, this does not appear to be a measure that all companies adopt easily. In Ana's case (she prefers not to give her real name), and although her company has been open to the option of teleworking for the next three weeks, it has had to be the workers who claim it. "I notice that it is difficult for the company to take these measures, it is a somewhat taboo subject. It has not been the same in all departments, but it is difficult for them to see teleworking. We only have one day a week and maybe next year two ", he relates. This financial analyst has also chosen to stay home for the next few days until after Christmas.

In the social sphere, the same is replicated. For a few weeks now cancellations of dinners and usual business lunches began to occur on these datesBut there are those who have also made a withdrawal of social life in a kind of self-confinement. In the department of the large company where Henar works, they had planned to have a dinner in a restaurant last Thursday, but due to the increase in cases around her, she decided that she was not going to attend. "We were going to be 13 indoors, but in a few days I was going to León with my family and I didn't want to risk it," he says. After his message in the WhatsApp group that he shares with his colleagues, the reactions of the others "were like a waterfall", so the meeting was finally canceled.

Olivia (fictitious name) did manage to get the health to follow up after being in close contact with a positive last day 12, just on the verge of the outbreak of infections, but despite the fact that the protocol indicates that she should not be quarantined when vaccinated (except in Catalonia), he decided to isolate himself. "They told me that I could lead a normal life, except to see vulnerable people, but I decided to maintain extreme caution," he says.

On the one hand, "for fear of developing symptoms later" and, on the other, to make sure that he can travel from Madrid to Seville, where he is going to spend the Christmas holidays, and arrive calmly at Christmas Eve dinner. So these days he has decided to confine himself and cut his social life. "I wanted to protect myself to be with my family and not have scares," he says.