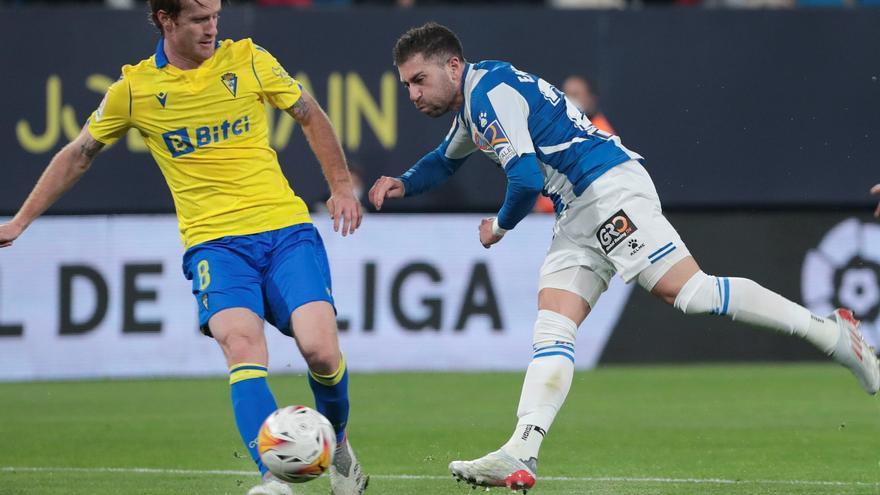 a goal of Raúl de Tomás in the last play of the game prevented the first win at home of the season for the Cadiz, who could not with him Spanish in the debut of Sergio González in match of League on the Cadiz bench (2-2).

After this meeting, Espanyol continues in the middle of the table in the classification and Cadiz is still in relegation places.

In the first part, the Espanyol soon took command, assuming greater presence in the opposite field. It didn't take long for the visitors to take the lead, after a measured pass from Sergi Darder over Manuel Morlanes, who took advantage of a hole in the center of the defense Cadiz to beat Argentine Jeremías Conan Ledesma (m.9).

The Cádiz looked for the exit of ball Madrid's Álex Fernández supporting the passing lanes in the new role he exercises with Sergio González as game organizer. In the 25th minute, a center from the right was not taken advantage of by Darder, when he headed the ball wide.

Cádiz did not shoot between the three posts until minute 35, in a loose and very focused shot by Alberto Perea that Diego López stopped without problems. close to rest, the local fans asked for a penalty by a fall of the Honduran Anthony Lozano in the espanyolista area (m.38).

After restart, Espanyol came out dominating again, having two options to increase the score, in a direct free kick from Adrián Embarba and in a shot with a lot of intention from Raúl de Tomás.

But nevertheless, it was Cádiz that tied, after a center by Isaac Carcelén that Lozano touched and pushed into the net Alvaro Negredo by taking advantage of an error by Óscar Gil (m.54). The meeting ceased to be corseted and the midfield missed the seams, replicating Espanyol shortly after in a shot by Javier Puado that Ledesma stopped.

The stop of the night came later, after an internship by Salvador Sánchez Ponce 'Salvi' with a hard shot in the mouth of the goal that Diego López avoided in a great start (m.60). It didn't take five minutes for Espanyol to reply, when De Tomás nipped a cross from Puado and Ledesma sent the ball to a corner (m.65).

The meeting went down whole in the following minutes with an Espanyol that seemed to see the possibility of losing to the local momentum and decided to wrap up. But he didn't do it in a solid way, which gave him headaches to the point of fear of losing the point he had. In the 81st minute, the The referee annulled at the request of the VAR a goal by Negredo due to a foul preview of Rubén Sobrino to Diego López.

The other two goals came in added time. Cádiz managed to come back from the match after an individual action by Iván Alejo. When it seemed that the people of Cadiz were finally going to win at home, which they have not achieved since May in the previous League, Raúl de Tomás silenced the Nuevo Mirandilla with the equalizing goal to two

Incidents: Match of the 21st day of the First Division, played at the Nuevo Mirandilla stadium in front of seven thousand spectators.