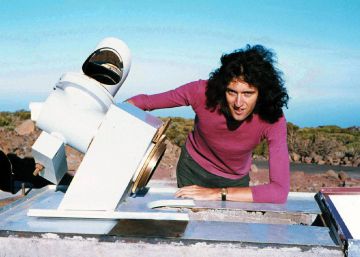 The Canaries feel that the banana is native to the islands. It was planted here in the 19th century, came from Vietnam and passed through Scotland. It was brought by Britons who lived on the Liter Site, an English paradise based since 1730 in Puerto de la Cruz. About the possible installation of the thirty-meter telescope that could come to La Palma, and the opposition of environmentalists, the current director of the Astrophysical Institute of the Canary Islands, Rafael Rebolo, has said: "I hope that the Canaries feel as proud of their sky as of the banana".

Well, the sky is now, like the banana, one of the Canaries proud …, and, like the banana, born in another country, exactly in the country of the stars. Rebolo's predecessor at the head of the Astrophysicist, Francisco Sánchez, who in 1961 laid the first stone of this utopia, found himself here with indifference and remoteness that now give more value to his experience.

It was easier to plant the bananas. Sanchez lived in precarious, and now has told in a book ( Dreaming stars. This is how Astrophysics was born and consolidated in Spain ) that experience that united science and hardship. Toledano of 1936, was born to Astrophysics by chance, came to the island with his wife, Maria Anselma Almeida, also a scientist, to put rudiments that seemed more useful as a hut than materials to reach what is now the other essence of the Islands, the starry sky.

"It was a place like the best." And he began to compete with the skies of Chile or Hawaii, opened headquarters even closer to the sky, in the Roque de los Muchachos de La Palma, and attracted scientists and countries and now what began as a hut of military origin is , as he wants and wants Rebolo, something that the canaries (and the Spaniards) "should be proud of". "The Canary Islands and Spain had to take advantage of this sky, not only to do first-class science, but technology," says Sánchez, without nostalgia, with conviction. It was a utopia, "and now it's a miracle … I was the first self-taught Professor of Astrophysics, and now our people are distributed all over the world, and people from all over the world come here, from Chinese, Japanese, Peruvians, Germans. .., youngsters who kill themselves for doing the thesis with us. "

Now, given the possibility of having another telescope on La Palma, the environmental opposition is stirring … "They don't know, and it's something to know: you can't imagine. The telescope doesn't spoil the sky, what a barbarity. They are passive instruments: we look at each other, we collect the photons, we analyze them and we draw conclusions.It is not an instrument from which things go outside.What ignorance … But this has happened: to know what was in Teide, wealth immense that was up there, Humboldt had to come from Germany. The sky has been discovered by pushing. Pushing to the end. "

The universe never shuts down. "Not a second, there is always the starlight." Under that light he found inspiration for his songs the English astrophysicist Brian May, guitarist of the Queen group. In the prologue to Sanchez's book, May says that she woke up every day "I saw ultramarine skies and breathed an invigorating air, and with the silence of nature, such views penetrated my soul, and have never left me." That Francisco Sánchez and his wife breathed when, in 1961, they felt near Teide that they were closer to heaven.