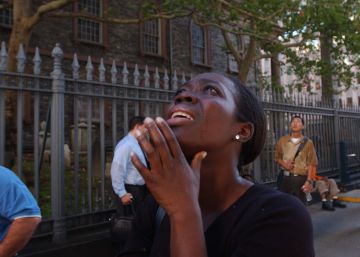 The restlessness of the days makes me go out into the street and spend hours walking. I am going very fast, almost always in a certain direction, the place where I have met someone or where I have to do something, and where perhaps, in other circumstances, I would go by subway or bus. I went to a meeting with blind readers by taxi because I was distracted and it was getting late, but when I finished I went home taking a walk, although it was very far, more than seven kilometers according to the step meter on my phone.

These blind people with whom I am going to meet have formed a fervent reading club that meets once a month in a restaurant room, due to the corporate and once futuristic distances of northern Madrid. Before they read books in Braille and now they listen to them in very high quality recordings provided by ONCE. The timing of the greetings is somewhat uncertain because the sanitary precaution of not touching contrasts with the necessary closeness of touch. Readers gather around a banquet-like table at the same time as guide dogs of great docility sit below it. The simultaneity of so many presences so extraordinarily alert to the sound and value of words creates a kind of magnetic field in literature. “We see the world through words,” they tell me.

The external world that almost all of us take for granted is a fragile construction that the brain devises from the perceptions of the senses.

The room is in a basement and that accentuates the feeling of immersion. The outer world of daytime agitation and visual primacy is far away. We are talking about a novel that I have written, but now I discover it through these readers of infallible attention who have a particular capacity to appreciate in the story sensory cues that are not those of sight. In the novel’s title they recognize a purely auditory perception: the sound of footsteps on a ladder. They tell me about all the information that someone’s steps can transmit, as unique and as revealing as a voice. They say that there are more valuable books for them because they are full of allusions to everything that does not belong to the realm of sight: sounds, smells, the texture of things, the closeness of bodies, flavors. In that book I wanted to tell something that I had learned from my research friends neuroscience, that reality, the outside world that almost all of us take for granted, is an approximate and very fragile construction that the brain devises from the perceptions of the senses, and that any slight alteration, any peculiarity in cognitive baggage is enough , so that the world that seemed so firm to crumble or take on another unusual aspect. In that room, in the reading club, my novel were words that elicited images devoid of visual connotations: cities made of steps, voices, traffic noises, resonances that delimit spaces, smells of the sea, of the river, of food, exact presences perhaps suggested by the smell of a cologne and the rhythm and force of heels on the pavement.

The uncertainty of the times was filtered in the conversation, in the readings. The feeling that anything unheard of can happen at any time, that the complicated and everyday fabric of reality is as fragile as the imaginative constructions of the brain, made the memory of September 11, 2001 in New York, which is very much inescapable. present for me these days. So I told it in the first person in the newspaper while I was living it. Time acts as a composter of the materials of memory: it mixes and removes them and submits them to the partial modifications of oblivion and leaves them ready to become the fertile soil of fiction. A reader raises her face towards me and asks me what is the role of time in writing: I reply that it is just time that has made what I lived then become the germ and matter of what many years later I have imagined, the lives of fictional characters who experience in another way that uncertainty, that fear, that inability to accept as real what we had before our eyes, but we also perceived through other senses. My most powerful memory of September 11 in New York is not visual, but olfactory, and almost on the palate too: a smell of wet ash and rotten organic matter that was noticeable in the fins of the nose and in the roof of the mouth.

The trivial, the accidental, the minimum, only leave a trace in the memory of the witnesses.

So we would go out into the city with the intention of seeing, hearing, and capturing as precisely as possible everything that was possible in those moments. Observation is a duty of citizenship. You have to look very carefully at the things that we are witnesses to be able to tell them as they were to those who are far away and to those who come later. Not even the most rigorous historical investigation can capture that specific tonality of the time lived and observed in the present. Like a detective novelist, the historian knows the outcome, and organizes her story in his direction. He who observes in the present sees with equal intensity what will later be known to be trivial and what was significant. But just in the trivial sense of time tends to reside mysteriously. The trivial, the accidental, the minimum, only leave a trace in the memory of the witnesses.

So I say goodbye to my blind friends and make my walking tour of the city at the time when the shops and offices have already closed and people come home, go to the subway, enter the bars for the first beers of the night. A huge newly emerged full moon occupies the entire dark bottom of Ayala Street. A lady comes out of a supermarket with a cart from which a mountain of toilet paper overflows. In two successive corners of the neighborhood, the locks are on and the lights of two Chinese stores that never closed are turned off. There are areas of silence without traffic and solitude, as in that September, and there are others, terraces of bars, bus stops, where, also as then, normality seems intact. No one knows how we will remember these days in a few years.