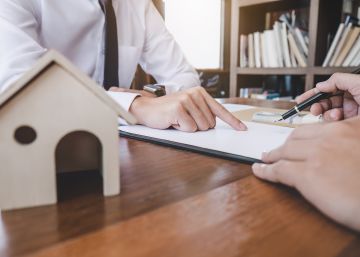 The collapse of specialized courts in mortgage matters, created in 2017 to absorb the flood of consumer lawsuits against banks, has led some of its judges to request the involvement of entities to decongest rooms. The strategy is based on establishing voluntary protocols by which, at the time the court receives a lawsuit, the bank tries to reach an out-of-court agreement with the client in a limited period of time. These types of agreements between financial institutions and clients are already common, but it is the first time that Justice itself has promoted them, as reported Five days this Friday.

The first mortgage courts to promote these programs have been those of Pamplona and Barcelona and the first entity to join them is CaixaBank, according to judicial sources.
The Barcelona protocol points out that the reason that the judges encourage banks to collaborate is that: “Given that today there is a pendency of 34,940 pending issues to be resolved in the first instance We would need about 15 years to refer the problem to the second instance. The serious situation of pendency justifies the adoption of extraordinary measures to solve this situation, in which all the groups collaborate ”.

The mortgage court of Barcelona has already pioneered when establishing universal criteria for the express resolution of similar cases. Despite this, A year ago, he chose to stop pointing out new judgments by finding that those planned already occupied his 12-month agenda..
Given that the 54 specialized courts – one by province and another by each island – accumulate even more than 255,000 unresolved cases and have a limited staff, it is expected that other offices will end up applying the model of extrajudicial agreements promoted by that of Barcelona .

its The process begins with the accession of the entity to the protocol. To do this, in addition to signing the relevant documents, you must provide an email in which to receive notifications of the lawsuit and customer data to be able to enter into negotiations.

In this way, when a claim not yet registered is filed, before admitting it for processing, the judge will issue a ruling that will establish 20 business days for the parties to negotiate extrajudicially and can reach an agreement. In that period of time, the bank and the client should sign a pact with which the judicial procedure would be concluded through the withdrawal of the plaintiff. The financial institution must commit to send an email to the client's defense in which it reports the clauses whose inefficiency it is willing to recognize and the specific amount of money that it proposes to reintegrate.

If the client accepts the offer, he must present in court, within the 20 days allowed, a letter in which you report your withdrawal in the case. In the event that a pact is not achieved, the bank must commit to appear in the procedure to be able to be placed through its solicitor. In the final judgment, the judge or court that issues the ruling may take into account the terms of the negotiation to resolve the costs of the corresponding instance.

This same procedure also applies to lawsuits that are in more advanced stages: matters that are admitted for processing and pending the appearance of the defendant and lawsuits pending the previous hearing or sentencing.

The protocol details that if the agreement is reached “as is desirable” before the defendant's location, the lawyer of the administration of justice must issue a decree dismissing the procedure without imposition of costs. Otherwise, if the agreement is reached after the placement, the withdrawal must be signed by the attorneys of both parties so that the procedure is concluded again by decree of the judge without imposition of costs.

The express procedures of Barcelona have to do with the validity of the opening commission clauses, early maturity, default interest, mortgage expenses and the amounts to be reimbursed to the client. The protocol itself states that although there are several alternatives to conclude the “ideal” judicial procedure, it is the withdrawal of the client.

Thus, instead of 15 years that would take the process to resolve all accumulated sentences, the period is reduced to a maximum of 20 days.

Unclog the court. For its part, the Pamplona protocol, which is in the pilot phase, is motivated because there are criteria that are currently applied by the court "as already consolidated in terms of expenses and default interests" and its purpose is "to reach agreements between the parties and unclog the court ”.

Judicialized matters Precisely, in matters already judicialized, the protocol foresees how to solve them: “The entity will pay the client 50% of the expenses generated by notary and agency and 100% of the registration fees”. It will also reimburse interest "from the date of payment, considering the invoice or minute as such," but no costs will be paid. The protocol specifies that if the deed is cancellation, the entity will not reimburse any amount to its client and that the expenses of mortgages that have as their object the subrogation, extension and novation of the same are excluded.

Interest on arrears. For procedures already prosecuted in which default interests are challenged, the protocol provides that if the agreed interest rate is higher than the remuneration rate in more than two points, the entity will recognize the nullity of the clause. Likewise, if there have been charges, it will return to the customer what was paid above what would have been applicable by applying the ordinary interest rate in effect at the time of payment.